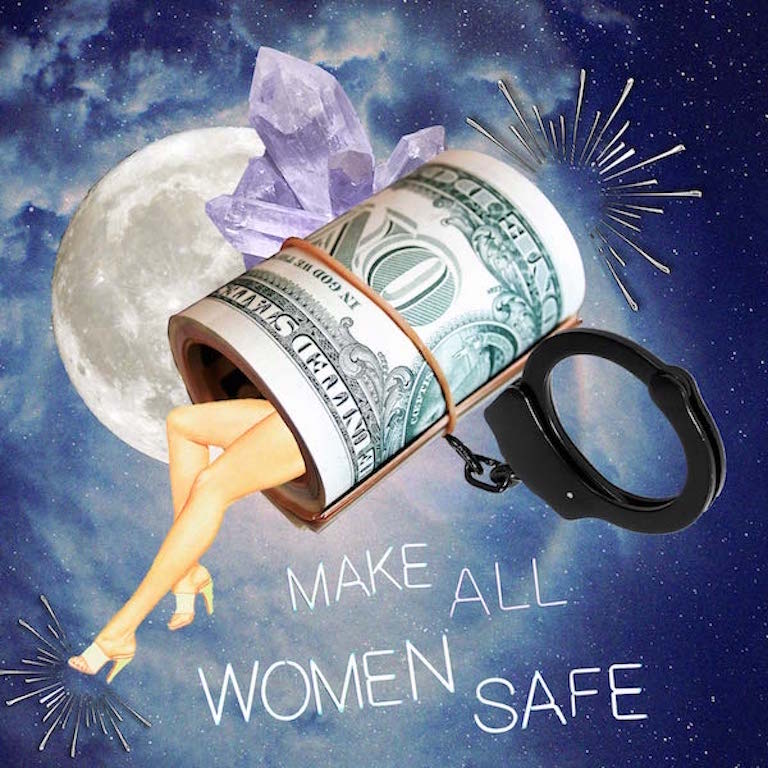 Over the past year, the movement to decriminalise prostitution in the UK has gained unprecedented traction. Led by the English Collective of Prostitutes (ECP), which describes itself as “a self-help organisation of sex workers”, the #MakeAllWomenSafe campaign expresses an urgent need for legal reform with regard to the current state of criminalisation, particularly in cases of individuals working together for reasons of safety.

Contrary to popular belief, 74% of the approximately 72,800 prostitutes currently working in the UK are working mothers providing for a household. “When a bill comes in,” one worker tells me, “I go out and earn the money to pay it. Simple as that.” At thirty, having found herself suddenly the sole caregiver for a disabled child, without a viable source of income, Sam* identified prostitution as a “quick fix” to get by in the short term. “That was thirty-three years ago,” she says, quietly.

Aggressive policing and opacity concerning the professions’ legality have resulted in high volumes of prosecution for the charges of soliciting and brothel-keeping. The police claim to target clients rather than workers, however statistics dispute this fact. Once charged, they are landed with substantial fines and a criminal record that disbars them from most professions, effectively disqualifying them from finding ‘legitimate’ work later on.

Within two weeks of her first client, Sam* had been arrested and charged. “And that’s it,” she says, stunned, “you’re stuck.” She recalls how the police officers jeered at her as they were processing the arrest. Why couldn’t she get a job at M&S? Did she not like paying taxes? Sam* laughs bitterly at the memory. Caring for her daughter, who is now an adult but remains dependent, occupies all of her daytime hours and her criminal record means that she would fail a CRB check, required by most employers. “And anyway, what about the fines they charge me?” she cries, referring to the police. “Meanwhile we pay for their Christmas parties.”

Beyond the legal and financial ramifications of prosecution, sex workers pay a heavy price in order to protect themselves and their families. Intense stigmatisation means that the majority do not disclose their involvement in sex work to friends or family, forcing them to be dishonest about the reality of their lives and in many cases to isolate themselves from individuals and opportunities. The psychic toll of this concealment and its associated shame can be crippling. Years after her first arrest, Sam* was offered work as an Emergency Respite Carer, a well-paid role for which she was amply qualified and passionately keen, however she turned it down, for fear of the organisation finding out about her work.

The ECP was founded in 1975 by two immigrant women. In their inaugural statement, the collective quoted the United Nations’ finding that, as of 1980, “women d[id] 2/3 of the world’s work for 5% of the income and 1% of the assets”, asserting that any policy that did not take this into account served to “hide the single biggest truth about women’s lives.” Namely, that women are systematically poorer than men under patriarchy, including their access to employment. Since their formation, the ECP have fought hundreds of individual legal cases on behalf of sex workers and succeeded in cases of Soliciting, closure orders, ASBOs, Brothel-Keeping & Controlling, including the first ever private prosecution for rape in England and Wales.

Laura Watson first joined the ECP in 2010, after seeing a group of sex workers marching triumphantly during the May Day celebrations in London. She liked the pragmatism of the collective’s approach, which is focused upon finding workable alternatives whilst recognising sex work as a legitimate and sometimes unavoidable reality.

Laura often advises workers who have just been raided or experienced abuse, ensuring that their case is taken seriously by police and not used as a pretext for arrest. “Every interaction with the police is a hostile one,” Laura observes grimly. “They’re either not there when you need them, or else, when you’re trying to get on with normal life, forty of them turn up to arrest you.” The acrimony makes sex workers less likely to report violence perpetrated against them and emboldens violent clients, who gloat that their victim has no one to turn to. Laura explains that any money recouped from a charge of Brothel-Keeping is divided up between the police and the taxman, meaning that there is, “literally an incentive to be unsympathetic.” When the law was first passed in 2003, Laura describes a dramatic spike in the number of raids being carried out, often on premises that had previously been visited by police for so-called “welfare visits”.

Despite the increase in prosecutions for Brothel-Keeping, Laura assures me that networks of sex workers—such as the ECP—are active in helping one another stay safe. “The terrible thing is,” she explains, “that as an organisation, we can advise to an extent, but not on where to work, or how to operate safely, because that would constitute inciting to prostitution.” Both workers and care workers are hamstrung by the law, which criminalises the industry itself whilst making it impossible for them to either escape it or to work safely within it.

In the run-up to the 2012 Olympics, Mayor Boris Johnson launched an effort to ‘Clean Up London’, resulting in a spate of aggressive raids on premises. Becca*, a drama student with massive debt, was caught up in one such raid, on a premises in Central London. Officers found £1000 in cash on her person and Becca* was charged with Brothel-Keeping, along with all six of the women she worked alongside. “The job I loved most was teaching Shakespeare to kids,” Becca* muses, “but now I’d never pass a DBS check, so that’s behind glass.” Becca* gravitated towards premises because of the safety they provided, but now carries out stringent security checks herself, taking deposits and using CCTV to surveil prospective clients before allowing them to come up. She takes pains to stress that she is in the privileged minority but that criminalisation endangers everyone because clients are less likely to provide real names and details. In the event of theft or violence, Becca* has little chance of bringing the culprit to justice without information. “No matter how privileged you are,” she says firmly, “anyone engaged in this line of work is at risk of being harmed.”

Still, there is cause for optimism in the shape of legislative victories both in New Zealand and in Sweden. In 1999, Sweden became the first nation to decriminalise the selling of sex, though buying it remains illegal. The ECP has warned that uneven criminalisation heightens pressure on workers to forgo safety checks and enter dangerous situations and 63% of sex workers in Sweden later reported that the change stoked resentment and actually led to an increase in violence.

More encouragingly, in 2003 New Zealand passed their Prostitution Reform Act, which decriminalised prostitution in its entirety. Instances of violence have decreased dramatically since the ruling and a new spirit of collaborative support has emerged between workers and the police. At a 2015 symposium at the House of Commons, Niki Adams of the ECP described how the ruling “transformed everything for us, both here and internationally. It meant we had a concrete model of where decriminalisation had been brought in and was successful.”

The success in New Zealand has provided the movement with vital precedent. Over the course of the #MakeAllWomenSafe campaign, Laura has observed a noticeable shift in public attitudes towards sex workers. “It’s helped spark important conversations that simply weren’t happening before.” Most tangibly, the Home Affairs Committee responded to increasing pressure by advising the government to conduct research on the viability of decriminalisation, the results of which are due to be released soon. Laura is tentatively hopeful. “It wouldn’t be a policy-writing mission,” she reminds me, “but a decision of that kind would carry significant influence.”

Will the UK Decriminalise Prostitution?