Of the approximately 72,800 sex workers in the UK — at least 88% are women. The majority are mothers working to support families.

Prostitution is increasing because poverty is increasing. Approximately, 86% of austerity cuts have targeted women.

Government policies of benefit sanctions and the introduction of Universal Credit (UC) have deliberately caused destitution and pushed more women, particularly single mothers, into “survival sex” to feed themselves and their families. When the UC £20 uplift is scrapped, only three in 10 women who claim will be in a situation where their monthly income is higher than their monthly spending.

Evidence from sex workers to the 2019 Work and Pensions Committee Inquiry into Universal Credit and Survival Sex resulted in the Committee recommending changes to draconian sanctions and the five-week delay. Evidence was also given by sex workers to the UN Special Rapporteur on Extreme Poverty whose searingly critical report commented on “the harsh and arbitrary nature of some of the sanctions”.”

Instead of addressing the increase in poverty caused by its economic policies, the response from the government (both national and local) and the police have been to increase arrests, criminalisation and crackdowns against sex workers. Measures that would help women exit prostitution include: repealing universal credit, benefit sanctions, the benefit cap and bedroom tax, reinstate Income Support for single mothers and a Care Income. 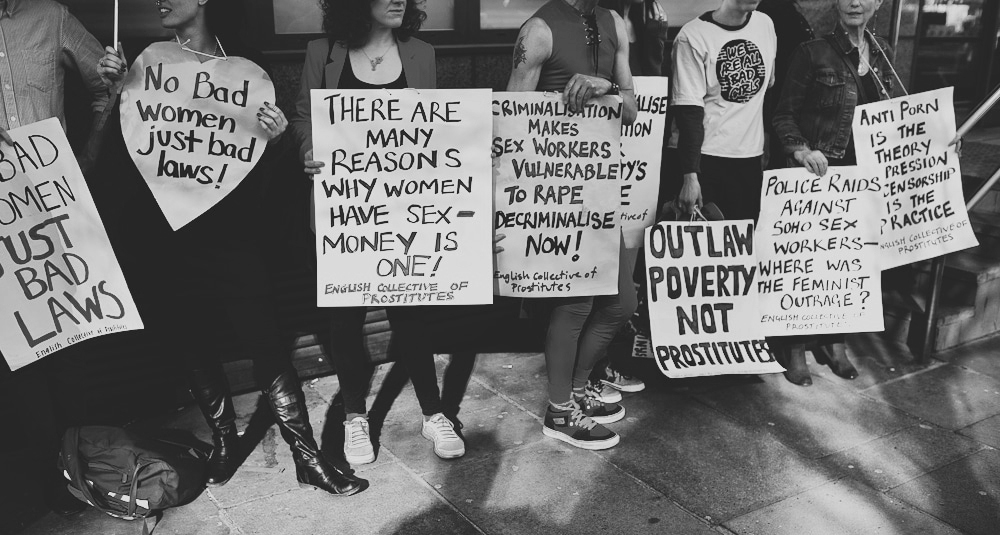 Huck Magazine: How the cost of living crisis is endangering sex workers

The Justice Gap: Sex work in a pandemic – criminalising survival

Sky News: ‘Selling sex for £5 is the only way I can survive after Universal Credit chaos’

Grazia: Why Is It Only When Universal Credit Forces Women Into Sex Work The Government Actually Listens?

Independent: ‘It was sex work or starvation’

Sky News: Survival sex: ‘Women are living in fear of the state’

Press Release: ECP to give evidence to the Work and Pensions Committee Inquiry on Survival Sex

I News: We are single mothers and sex workers – this is what we want the Government to know about Universal Credit

The Guardian: MPs to launch inquiry into ‘survival sex’ by benefit claimants

I News: Sex work was my only choice while bringing up my disabled daughter

The Star: Sheffield women being forced into prostitution by benefit cuts

The harm caused by the introduction of Universal Credit isn’t a mistake. Whatever cost impact assessment was done could have predicted that if you take money away from mothers who are already living below the poverty line, many will turn to prostitution to feed their children. Read more.

Having a disabled child has always meant I can’t go out and get a normal nine to five job. It was either go on the streets and earn money the only way I thought I could at the time, or give my child up. And that wasn’t an option I wanted to think about. Read more.

The UN Rapporteur on Extreme Poverty and Human Rights reports on UN member states’ ‘initiatives taken to promote and protect the rights of those living in extreme poverty’. The ECP’s submission to the Rapporteur points to the way austerity cuts have targeted women, with special note of single mothers, women who are carers, and EU migrant women. It criticises the increased criminalisation of sex work and the ways in which the police abuse their powers.

The Rapporteur’s scathing report and statement condemned the UK Government’s “‘punitive, mean-spirited, and often callous“ austerity policies which could have been designed by a “group of misogynists” in the way austerity affected women.

Written and oral evidence from the ECP to the Work and Pensions Committee Inquiry into Universal Credit and Survival Sex focused on the impact of austerity on levels of prostitution in the UK.

The Committee published its findings in November 2019 and recommended action against some of the worst injustices of the benefit system such as draconian sanctions and the five week delay to get Universal Credit which have increased destitution and pushed many more women into “survival sex”.

See video below of oral evidence session, Wednesday 22 May 2019.