The Wages for Housework Campaign, Queer Strike & the English Collective of Prostitutes 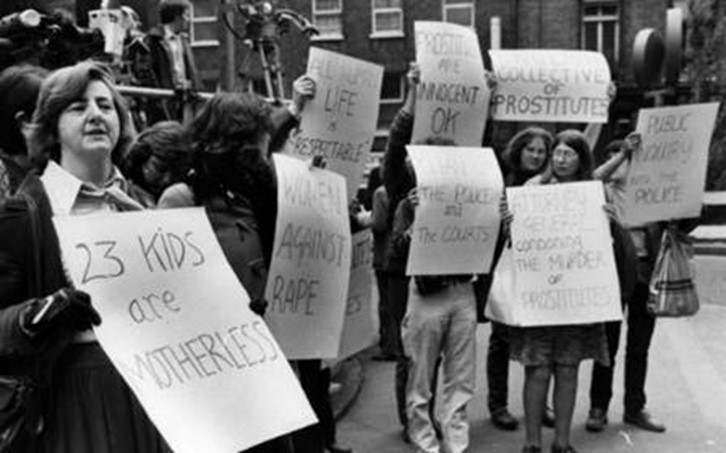 We were upset to hear of the passing of Maureen Colquhoun. Many of us who knew her and had worked with her really loved her. She had no airs and graces though she was one of only about 30 women MPs. She took women’s issues as her issues for her parliamentary work. Few women in Parliament, lesbian or straight, have done this.

We first met her in 1977 when she was de-selected by her constituency Labour Party (Northampton North) after she came out as a lesbian, accused among other things of having an “obsession with trivialities such as women’s rights”.

The multiracial Wages Due Lesbians (now Queer Strike) joined with others to form the Maureen Colquhoun Action Committee (MCAC) and campaign for her reinstatement. As part of the MCAC, we picketed the Labour Party National Executive Committee (see photo) which was meeting to decide whether she should be reinstated. Her constituency was forced to take her back.

The Wages for Housework Campaign (see Global Women Strike), including Black Women for Wages for Housework (Women of Colour GWS) and the English Collective of Prostitutes (ECP) issued a statement: We defend Maureen Colquhoun to defend and build our power as women.

After she was reinstated, we stayed in touch and continued to work together. She presented the Protection of Prostitutes Bill on 6 March 1979. At that time, no other prominent feminist stood up in defence of sex workers, and even today few have supported sex workers’ struggles against criminalisation.

After she (and many others) lost her seat to Thatcherism in 1979, she continued to stand with the grassroots. She joined the picket outside the Old Bailey called by the ECP and Women Against Rape during the Yorkshire Ripper trial after the Attorney General (prosecuting) made his infamous statement about the victims: “Some were prostitutes but perhaps the saddest part of the case is that some were not. The last six attacks were on totally respectable women.” Maureen Colquhoun knew what it was like to be treated as an outcast.

Sadly, our comment “No-one trusts political parties any more, especially women, for our interests have never been a priority for them” is as timely today as it was in 1977. Women politicians who have followed into the House would do well to remember Maureen Colquhoun’s principled courage and commitment in coming out and speaking on behalf of her sisters who were criminalised because they fought their poverty with sex work. She never forgot the movement which enabled her to enter the corridors of power, and the grassroots women’s movement will never forget her.