Statement: For Prostitutes and Against Prostitution (1975) 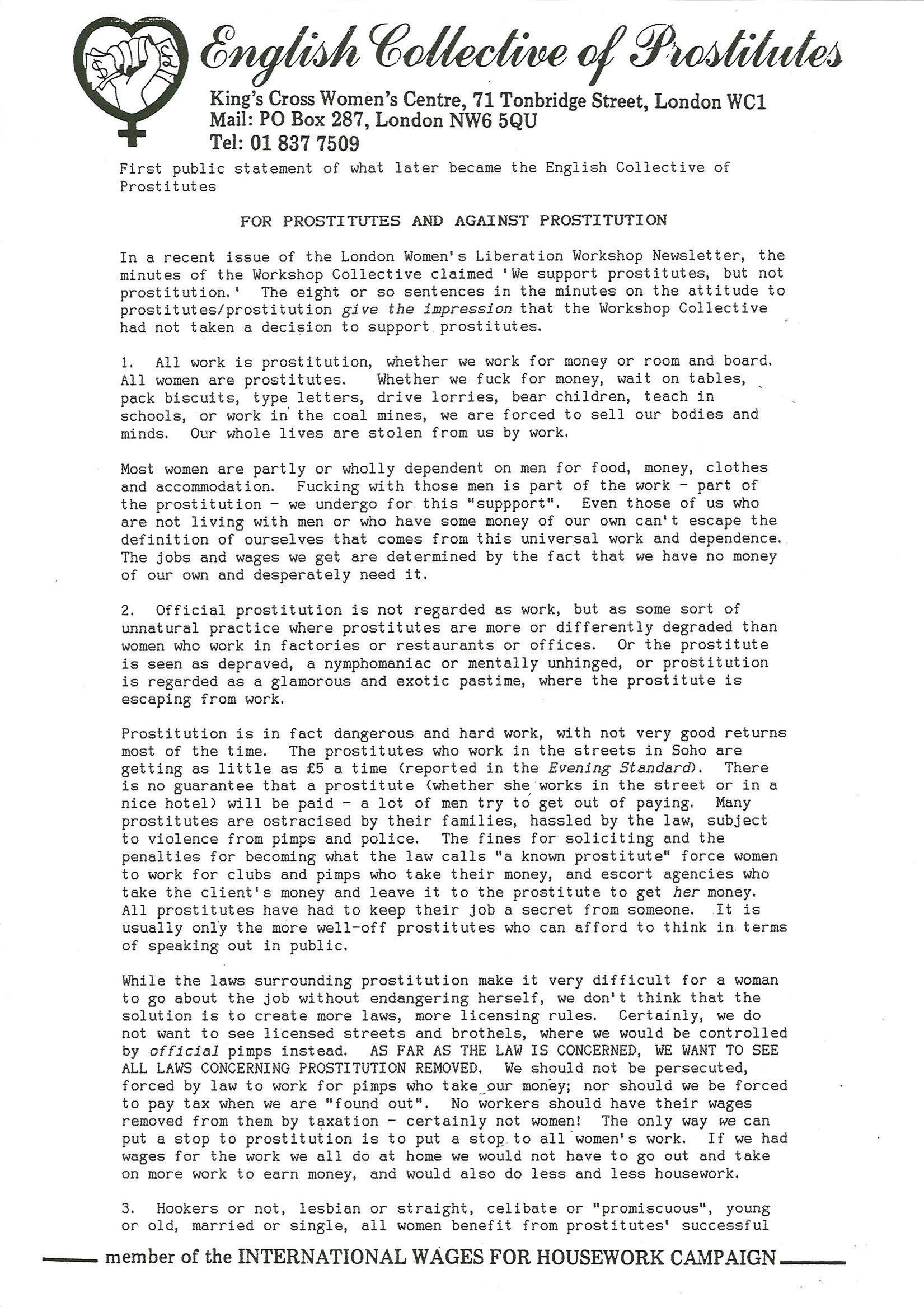 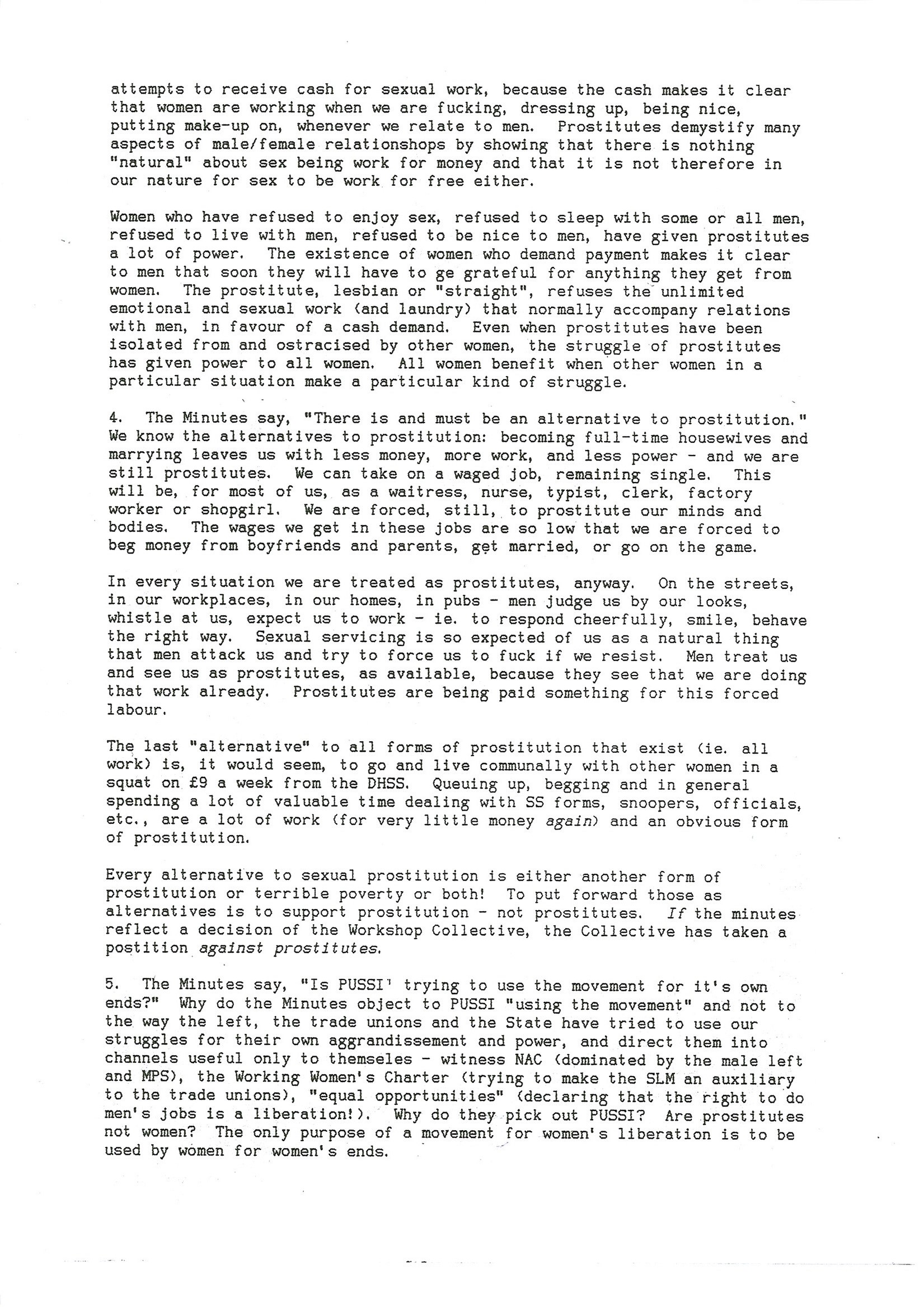 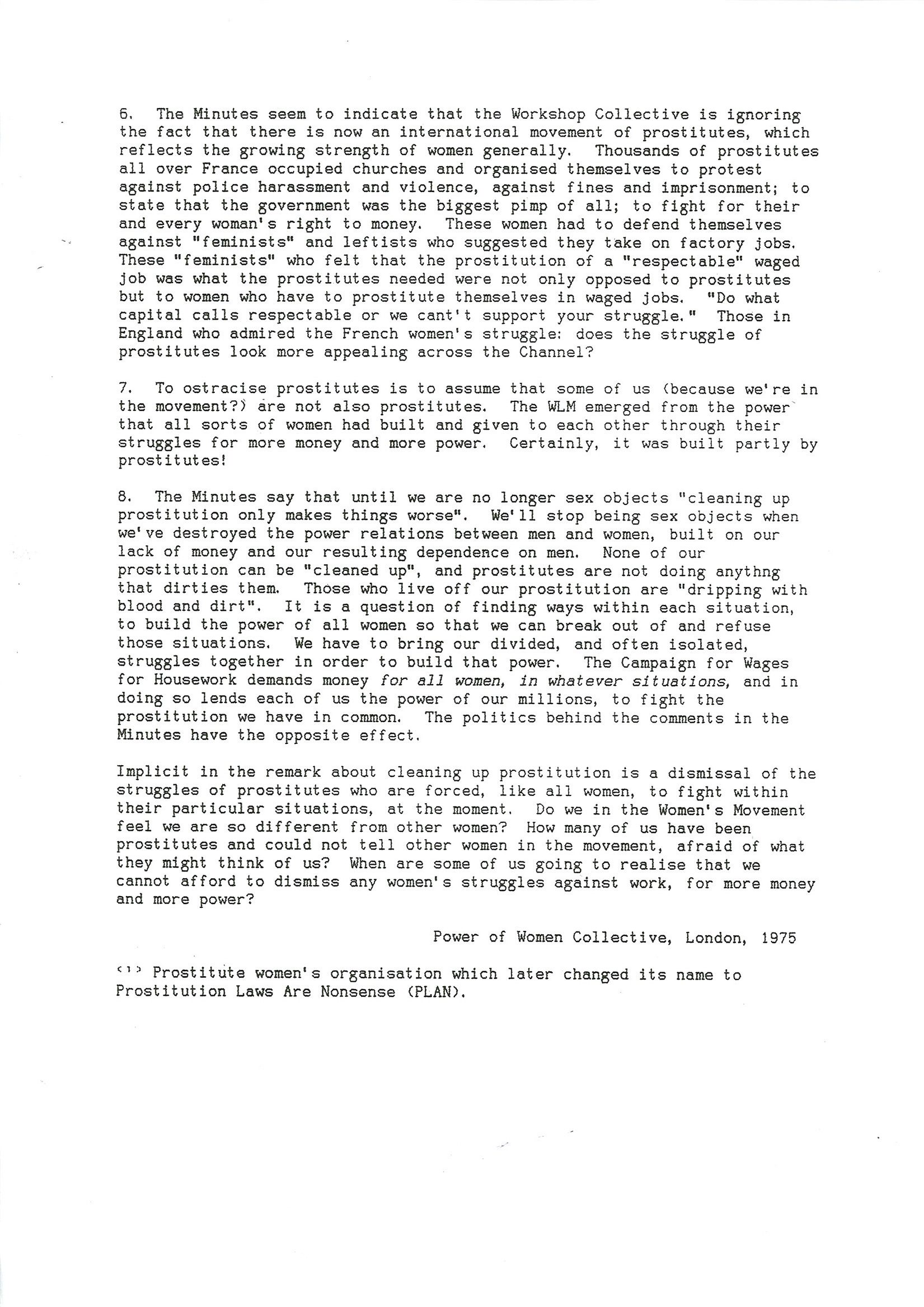 First public statement of what later became the English Collective of Prostitutes.

FOR PROSTITUTES AGAINST PROSTITUTION

Most women are partly or wholly dependent on men for food, money, clothes and accommodation. Fucking with those men is part of the work – part of the prostitution – we undergo for this “support”. Even those of us who are not living with men or who have some money of our own can’t escape the definition of ourselves that comes from this universal work and dependence. The jobs and wages we get are determined by the fact that we have no money of our own and desperately need it.

Prostitution is in fact dangerous and hard work, with not very good returns most of the time. The prostitutes who work in the streets in Soho are getting as little as £5 a time (reported in the Evening Standard). There is no guarantee that a prostitute (whether she works in the street or in a nice hotel) will be paid – a lot of men try to get out of paying. Many prostitutes are ostracised by their families, hassled by the law, subject to violence from pimps and police. The fines for soliciting and the penalties for becoming what the law calls “a known prostitute” force women to work for clubs and pimps who take their money, and escort agencies who take the client’s money and leave it to the prostitute to get her money. All prostitutes have had to keep their job a secret from someone. It is usually only the more well-off prostitutes who can afford to think in terms of speaking out in public.

While the laws surrounding prostitution make it very difficult for a woman to go about the job without endangering herself, we don’t think that the solution is to create more laws, more listening rules. Certainly, we do not want to see licensed streets and brothels, where we could be controlled by official pimps instead. AS FAR AS THE LAW IN CONCERNED, WE WANT TO SEE ALL LAWS CONCERNING PROSTITUTION REMOVED. We should not be persecuted, forced by law to work for pimps who take our money; nor should we be forced to pay tax when we are “found out”. No workers should have their wages removed from them by taxation – certainly not women! The only way we can put a stop to prostitution is to put a stop to all women’s work. If we had wages for the work we all do at home we would not have to go out and take on more work to earn money, and would also do less and less housework.

Women who have refused to enjoy sex, refused to sleep with some or all men, refused to live with men, refused to be nice to men, have given prostitutes a lot of power. The existence of women who demand payment makes it clear to men that soon they will have to be grateful for anything they get from women. The prostitute, lesbian or “straight”, refuses the unlimited emotional and sexual work (and laundry) that normally accompany relations with men, in favour of a cash demand. Even when prostitutes have been isolated from and ostracised by other women, the struggle of prostitutes has given power to all women. All women benefit when other women in a particular situation make a particular kind of struggle.

In every situation we are treated as prostitutes, anyway. On the streets, in our workplaces, in are homes, in pubs – men judge us by our looks, whistle at us, expect us to work – ie. to respond cheerfully, smile, behave the right way. Sexual servicing is so expected from us as a natural thing that men attack us and try to force us to fuck if we resist. Men treat us and see us as prostitutes, as available, because they see that we are doing that work already. Prostitutes are being paid something for this forced labour.

The last “alternative” to all forms of prostitution that exist (ie. all work) is, it would seem, to go and live communally with other women in a squat on £9 a week from the DHSS. Queuing up, begging and in general spending a lot of valuable time dealing with SS forms, snoopers, officials, etc., are a lot of work (for very little money again) and an obvious form of prostitution.

Implicit in the remark about cleaning up prostitution is a dismissal of the struggles of prostitutes who are forced, like all women, to fight within their particular situations, at the moment. Do we in the women’s movement feel we are so different from other women? How many of us have been prostitutes and could not tell other women in the movement, afraid of what they might think of us? When are some of us going to realise that we cannot afford to dismiss any women’s struggles against work, for more money and power?

For later version (1990) please see here. For Prostitutes Against Prostitution