Prostitutes Win Round in British Parliament 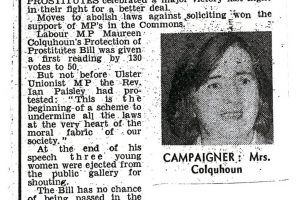 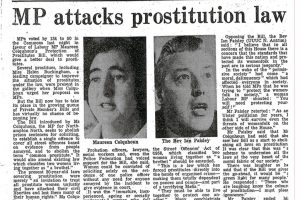 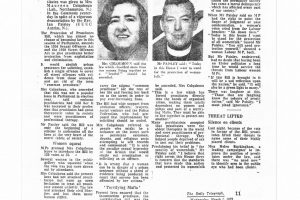 A growing movement to decriminalize prostitution in Britain won its first significant victory today when the House of Commons voted to allow introduction of a bill that would make the law much less harsh on prostitutes.

As a group of women representing a lobby for working prostitutes watched, applauded and shrieked their approval form the visitors’ gallery, the Commons voted 134 to 50 to consider the “protection of prostitutes” bill offered by a back-banch Labor Party member of parliament, Maureen Colquhoun.

Under 20-year-old British law, a woman can be convicted of being “a common prostitute” and sent to prison if a police officer testifies that he has observed her soliciting on the street and has warned her about it twice. Never is there testimony on whether the woman has annoyed anyone or endangered public safety, Colquhoun told the Commons.

“This appalling legislation,” Colquhoun argued, “prevents a once-convicted prostitute from escaping the streets” and forces her to carry “the stigma of being branded a ‘common prostitute’ for the rest of her life.”

Her bill would abolish the designation “common prostitute” and end imprisonment as punishment. It would establish instead a new crime of soliciting, punishable only by a fine. Anyone — a prostitute, alcoholic, a persistent salesman, a beggar or even someone soliciting passersby for a religious group — who annoys the public could be convicted and fined on testimony from someone who was annoyed.

Colquhoun’s bill also would eliminate the present law’s designation of “brothel” for suspected prostitutes who live together. This regulation, she said, “has forced prostitutes into the hands of organized crime, making them totally dependent on pimps, and part of a frightening mafia. They must be able to live together to protect tect one another.”

Telling the Commons she believed all prostitution laws should be abolished, Colquhoun added, “it is only the peculiar sexual hypocrisy of the British which has singled out prostitution or soliciting as an offense.”

She was strongly opposed in a brief debate that overshadowed the rest of the day’s business in the Commons. The Rev. Ian Paisley, the Ulster Unionist member of Parliament who is a Free Presbyterian minister and a leader of the Protestant Unionist in Northern Ireland, argued, “This is only the geninning of a scheme to undermine all the laws at the very heart of the moral fabric of our society.” Paisley preached loudly in a sermon against the bell. “The standards that have made this nation and protected its womenfolk in the past are inserious jeopardy.”

Prostitutes Win Round in British Parliament – The Washington Post

Statement: For Prostitutes and Against Prostitution (1975) The Guardian: From the archives – lunch voucher madame wins cut in jail term