Has the rate of sexual assault really increased in New Zealand since 2003?

This post is a response to the “meme” created by Nordic Model Now, claiming that the rate of sexual assault in New Zealand has increased since 2003, primarily because of the decriminalisation of prostitution in the Prostitution Reform Act 2003.

Link to the meme: https://nordicmodelnow.org/2016/08/11/meme-about-new-zealand-since-the-full-decriminalisation-of-the-sex-trade/

The first thing to do to the case numbers data should be to calculate the rate of sexual assaults and related offences by dividing the case numbers by the population of New Zealand (numbers just from google), this way we know that we are not seeing more sexual assaults because there are simply more people in New Zealand. The graph below shows the rates of recorded sexual assaults and related offences per 1000 people in New Zealand from 1994 to 2014. The Nordic Model Now meme uses data starting at the year 2000 “for simplicity”, it isn’t clear why this should be done considering that the data goes back to 1994. Including all the data from before 2000 does ruin the visual impact of their graph somewhat and makes the simple linear regression line less steep. The plot below shows a simple regression line for all years (1994-2014) in blue and a regression line for years 2000-2014 (used by Nordic Model Now) in red. 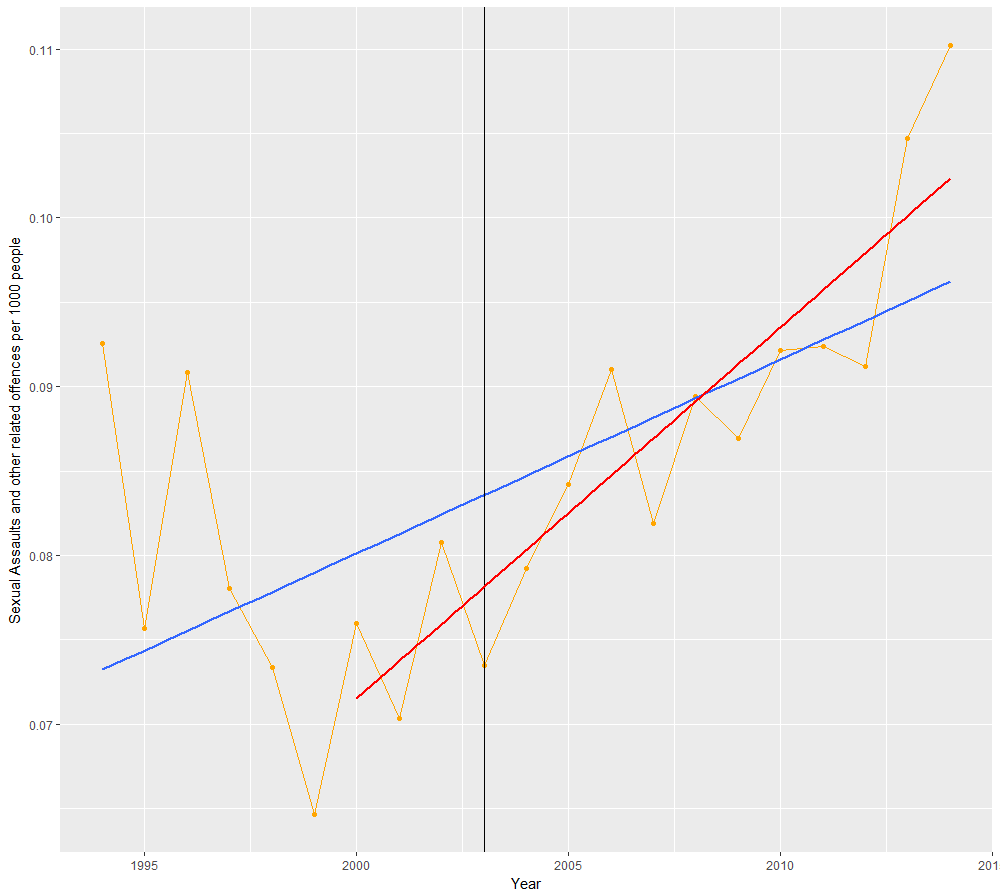 The biggest issue with this data, which is freely available from the New Zealand Statistics website, comes from the data footnotes for the year 2006.

“In June 2005, Police replaced the aging Law Enforcement System (LES), commonly known as the Wanganui computer, with a newer National Intelligence Application (NIA). This IT system migration is the largest crime-recording system change that has occurred since the introduction of the Wanganui computer in the late 1970s. This system change caused a step-increase in recorded crime statistics, coincident with the system replacement. This step -increase varied in magnitude between different crime-types and Police Districts. Caution should therefore be observed when making inferences from these statistics about trends the incidence of crime in New Zealand. “

(Link to the data footnotes: http://www.stats.govt.nz/tools_and_services/nzdotstat/tables-by-subject/new-zealand-recorded-crime-tables/release-notes.aspx)

Due to the police using a different computing system for reporting from mid-2005 onwards, the data is not comparable before and after this event since we don’t know to what extent the reporting system has had an impact of the number of cases. There is a definite jump in the rates of sexual assault and related offenses in 2005 and 2006, but to what extent is this a change in reporting or an increase in sexual assault? It is impossible for us to know. 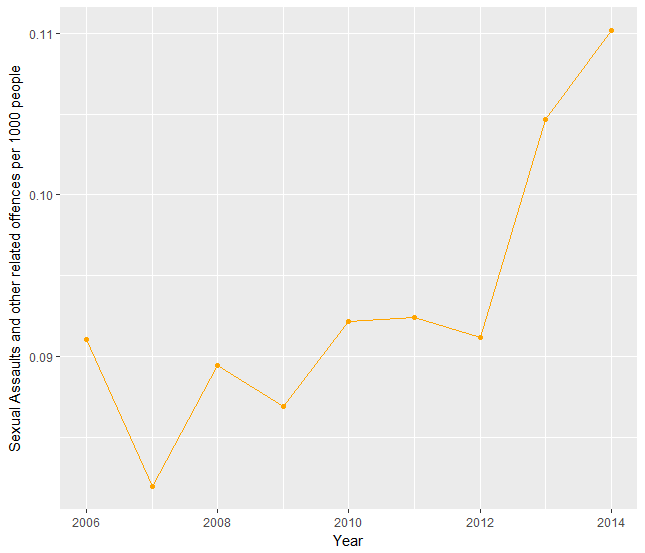 The Nordic Model Now conclusion that the Prostitution Reform Act 2003 is related to a rise in sexual assault in implausible for several reasons:

I News: What it’s like to be a mother and a sex worker Dead bodies don’t lie, but statistics do