Sex workers are a marginalised social group who face near constant opposition in the form of stigma and legal obstacles. COVID-19 has exacerbated the adverse condition of sex workers, many of whom have seen their income reduced in part or entirely as a result of social distancing. Like many precarious workers in the gig-economy, they have been offered few protections or funds by the UK government. In spite of the pandemic, sex workers continue to face rampant criminalisation, stigma, and discrimination.

Sex workers do not have the status of workers. This means they cannot claim sick pay and wage relief like workers who operate in all other industries. Some sex workers register as self-employed and pay tax, but are likely to be excluded from chancellor Rishi Sunak’s initiative to help this group of workers.

Furthermore, stigma and discrimination mean that many sex workers often report their income under a different occupation, such as massage therapy. This may impact their ability to claim funds, because they may struggle to produce paperwork in accordance with the applications.

Universal Credit, the safety net for many people in need, has been shown to be deeply flawed, and has failed to support the most vulnerable in our society even before the pandemic. The payments are not enough to live on, even when a claim is successful. Universal Credit for a single person under the age of 25, even though it has been increased from £251.77 per month to £342.74, is still nowhere near the national living wage which is well over a thousand pounds per month.

Nobody knows the inadequacies of the Universal Credit system better than sex workers, many of whom were driven to sex work in the first place because its failings. With no support being offered by the government, sex workers are being forced to choose between their health and destitution. “No one wants to be flouting the rules and putting themselves and others in danger, but those who are still working literally have no other choice,” affirmed Niki Adams from the English Collective of Prostitutes.

This global health crisis comes on top of an existing economic crisis, of which the impact has been felt disproportionately by women. The current pandemic is exacerbating the harm caused by ten years of Tory austerity, an inadequate welfare system, poor job security and zero-hour contracts. Prior to the pandemic, many people were already marginalised by deliberate policies, driven to sex work in order to survive a hostile economic climate.

There are between 60,000 and 80,000 sex workers in the UK. The UK government estimates that over 70% are mothers, many of whom sell sex to support their families. With no income and in the absence of financial assistance from the government, it is not only the sex workers who will face destitution, but the children, partners, parents, and grandparents who rely on their earnings.

Carers are disproportionately women, and caring is either unpaid or poorly paid, and performed under precarious conditions. Our society has devalued domestic labour and continues to deny that it is work. Care work is a vital pillar of our society, yet the people who care for children, or for the sick and the elderly, have little to no status, income or power. 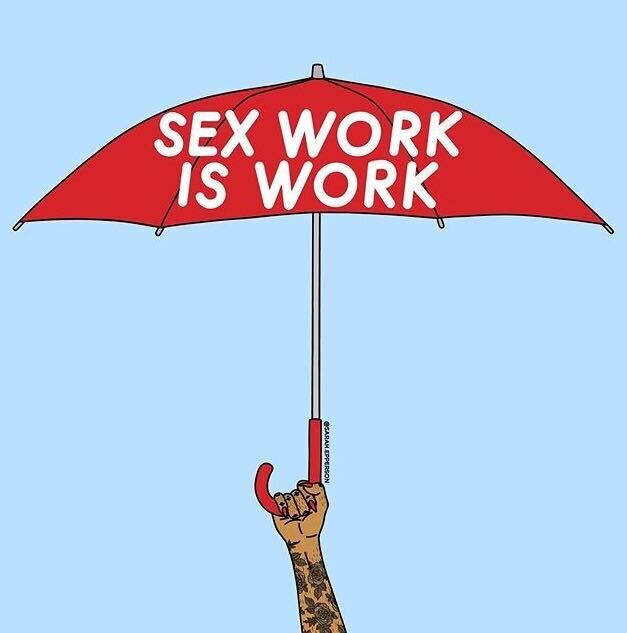 The English Collective of Prostitutes are demanding adequate financial compensation for carers. If women are compensated for their role as carers inside and outside of the home, they would not be forced to sell sex to survive. Care work has always been important, but this pandemic has highlighted just how critical it actually is. As well as sex work being considered work, care work should also be considered work, so people can receive compensatory support packages from the government during significant times of crisis.

In addition to economic hardship, sex workers also face the added burden of criminality. While the buying and selling of sex in Britain is legal, many of the corresponding activities are not, which means sex workers remain criminalised in many ways. For example, it is only legal to sell sex on your own. If you share a premise with another sex worker for safety, you could receive a 7-year prison sentence. Individuals and groups who oppose sex work are using the current pandemic to advocate for a law which criminalises buying sex, arguing that this will help abolish the sex industry and liberate the women working in it.

In reality, criminalising the client means that sex workers are exposed to higher levels of violence because their safety strategies are undermined. Fearing criminal sanctions, clients withhold personal information when booking services, leaving sex workers unable to screen their clients adequately. For street workers, this means less negotiation time, and less time to determine whether a client is trustworthy.

During this pandemic, sex workers are concerned about staying healthy and avoiding poverty just like every other insecure worker. As such, the added burden of criminality, stigma and lack of government support is not just unhelpful, but glaringly, undoubtedly harmful.

Euronews: Sex workers struggle amid the coronavirus crisis The Lead: ‘Sex work is work’: advocating for decriminalisation in France and the UK