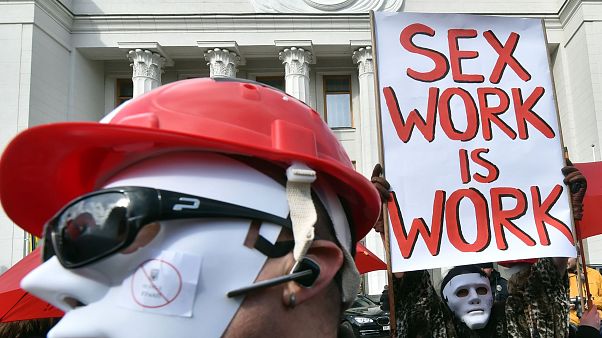 Many workers are facing an uncertain future, or an immediate financial struggle, due to the coronavirus outbreak. And for one industry, the impact has been unavoidable.

“We are in a lot of trouble,” Cari Mitchell, a spokesperson for the English Collective of Prostitutes (ECP) tells Euronews. “Because sex work is a contact job.”

“Nobody wants to go on working, of course,” she says – but without access to financial support, some are forced to continue working outside, meeting clients, and putting themselves at risk of contracting and spreading coronavirus.

With the lockdown measures in place, many sex workers have lost almost all of their clients, she adds.

It’s a similar situation in other European countries. In Spain for example, even prostitutes who work for third parties are not recognised as workers by the government, and so are not entitled to government support if they are temporarily laid off.

“In reality, all sex workers who work 100% of their time in sex work are affected and unprotected by confinement because of COVID-19,” said Conxa Borrell, the speaker from the unofficial union of Spanish Sex Workers (OTRAS).

“Women who recruit their clients on the street, those who work in flats, villas, clubs, massage centres, freelancers – we are all affected economically by this pandemic.”

She insists sex workers do not want charity, but agrees with the demands of the ECP. “We demand labour rights”, she told Euronews.

In France, the Fédération Parapluie Rouge (Red Umbrella Federation), which represents sex workers, has asked the government for a replacement income during the lockdown period “without any condition of regularity of stay”.

The estimated 30,000-50,000 sex workers in the country are classified as freelancers, but are not entitled to the €1,500 of aid that has been promised to workers by the state.

There is worry amongst the associations and unions that some of the poorest sex workers will find themselves forces to violate confinement measures in order to survive.

“It’s a terrible situation to be put into,” says Mitchell. “And it’s the government’s responsibility.”

The French Secretary of Equality, Marlène Schiappa, has said that “it is very complicated to compensate a person who carries out an undeclared activity such as prostitution”.

One avenue available to those who have the equipment and space to do so, is to take their sex work online. Many however, just don’t have this option.

“Some colleagues have moved to virtual work, but unfortunately, very few can do so,” said Borrell.

“Most of them do not have their administrative situation regularised and that prevents them from even having a current account to which they can redirect the income obtained.

“Others share a room with their own family, so it is logical that they cannot use the on-line method to survive. Many live together in areas where there is no internet and right now, the only way to earn some money is by this means, which is otherwise very exploited and hyper-saturated.”

One 29-year-old sex worker who has moved her work online, told Euronews: “Even though I work with webcams now, I feel in danger.”

Célia (alias) said January and February are already hard months for making income, and in March, when the situation usually improves, she has lost half of her income.

“Not everyone can or wants to sell virtual services. Online you are constantly abused,” Lespérance said.

“Even without using the webcam, I already get dozens of violent messages every week. The abuse by this kind of person has increased tenfold because of the excess of free time”.

Mitchell says she knows people who have turned to webcamming, some of whom are thinking of continuing with it when the coronavirus crisis is over. But the majority are going to go back to what they were doing before, she says.

Mitchell points out that the majority of sex workers are mothers. There are hundreds of thousands of sex workers whose families are dependent on the money from sex work,” she says.

“Sex workers can make enough to keep going, but it is a job that means you can have some money and also some time for your family and your children,” she says.

Fundraisers have been set up in different countries to try to help out, which Mitchell says “is not enough to keep people going, however long this goes on for”.

Shado-Mag: “There’s really no such thing as the ‘voiceless’. There are only the deliberately silenced, or the preferably unheard.”

Support the campaign for a Care Income Now!