For 12 days in late 1982 the English Collective of Prostitutes occupied a church in King’s Cross to protest police brutality. Frankie Miren interviews women who were at the centre of the dispute, and explores explores the legacy of their action today.

It’s November 1982 and you wake up on the floor of the Holy Cross Church in King’s Cross. Light streams in from the arched window above the crucifix, it shines through the pillars and onto your comrades, the sleeping sex workers who surround you. A baby cries. You hear the clatter of someone making tea. It’s chilly on the floor so you get up and put away your sleeping bag. This is day ten of the occupation.

It’s your turn to go outside and speak so you put on a mask, carnival-style; in 1982 you’re covering your eyes not your mouth. You want to be heard and the pandemic is police brutality.

Press have already gathered on the stone steps, beneath the English Collective of Prostitutes (ECP) banner and the blocks of flats which tower over the church. You tell them why you’re here: police racism and brutality against sex workers is out of control.

Sex workers, and particularly women of colour, are being arrested repeatedly, refused bail when they don’t plead guilty. Women are having their children removed by social services simply because they’re hookers. Recently, a white woman reported a rape to the police only to be told that no rape could have happened as she was a prostitute, and only for her Black boyfriend to be arrested on pimping charges (he will later be acquitted).

You tell them how police have begun waiting outside the Women’s Centre in King’s Cross, arresting women as they leave. ‘It’s like being under siege’, you say. You tell them how sex workers would be in and out of the Centre, using services such as Legal Action for Women and Women Against Rape, meeting with the Wages for Housework Campaign and ECP. King’s Cross was an epicentre for sex workers, and the Women’s Centre was a lifeline.

Back inside, everything from the occupation has been cleared away, and you sit quietly with your friends at the back of the church as a congregation files in for a service. 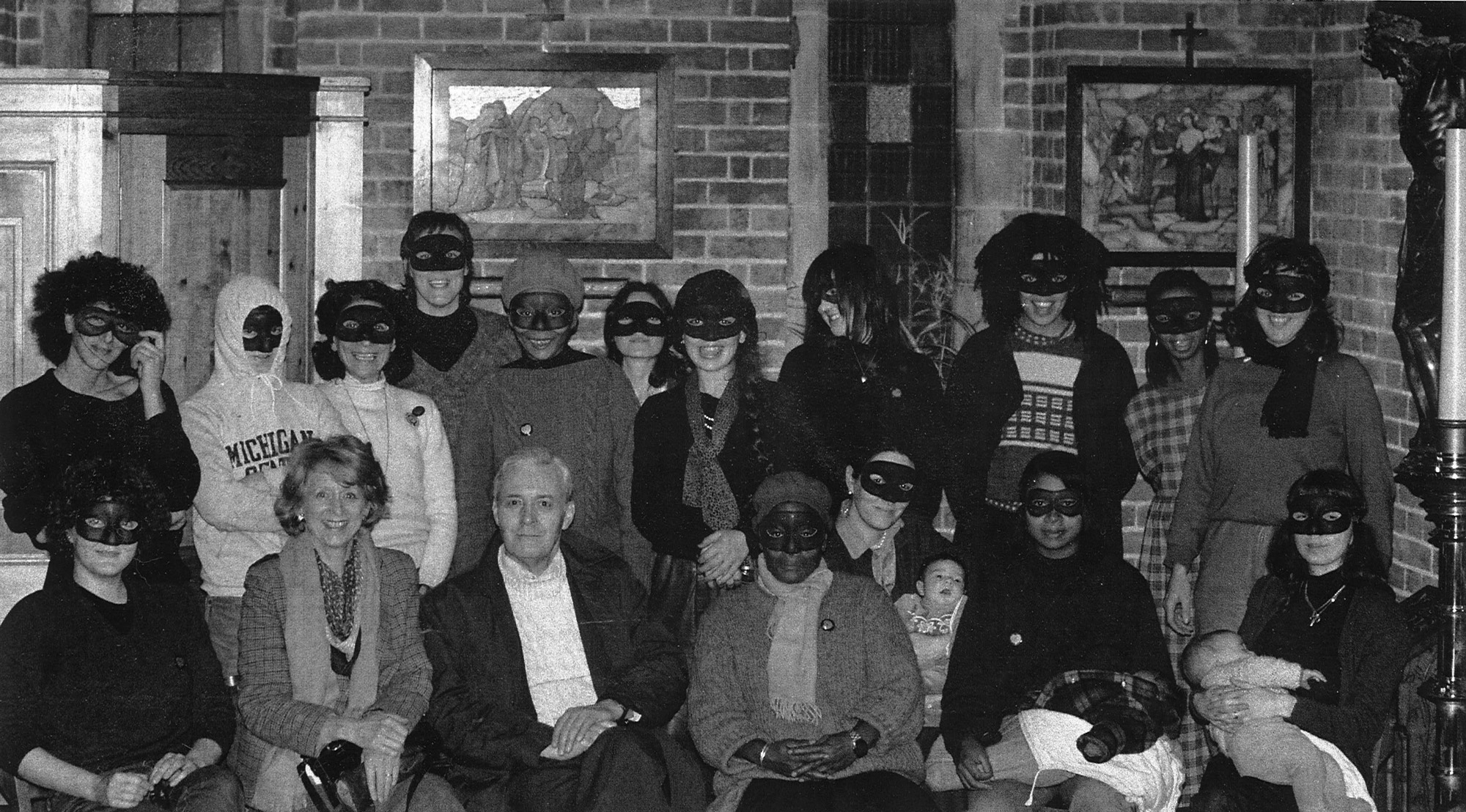 Later, a newsreader will tell viewers, ‘But first tonight, a bizarre protest in a London church in which masked prostitutes sat in the open while the congregation celebrated Mass’. A disgruntled parishioner will be filmed outside the church saying, ‘I’m very bitter. It’s not nice when you go to Mass to say your prayers quietly and you’ve got prostitutes in the way’. But the vicar will be interviewed saying it’s all cool; the Lord Jesus would not want these women thrown from the church. (You can still watch this footage.)

At lunchtime, men from Gay’s The Word bookshop bring in pans of hot food, more women turn up to show support. A meeting is called so you lock the doors and gather on the wooden pews. ‘Hookers in the House of the Lord!’ says Selma James.

You discuss the occupation bulletin which will go out today, photocopied around the corner and passed around, hand to hand, by sex workers, the general public, the press. A woman who was working outdoors in Argyle Square last night tells you, ‘All of us wore masks!’ Solidarity.

Someone reads out the occupation’s demands:

A moment of unity

Sara Walker, a member of ECP and Women of Colour Global Women’s Strike, was part of the occupation. I speak to her the day after a Black Lives Matter protest in London. Thirty years have passed since she went into the King’s Cross Church.

‘And here we still are’, she says. ‘Protesting the death of George Floyd and the deaths of so many people at the hands of the police’.

Walker remembers the occupation as a pivotal moment:

It was scary on one level; particularly for sex workers and rape survivors. I was new to politics, and felt it was going out on a limb to join an occupation. On the other hand, there was a great spirit inside, a great feeling of togetherness. An event like that shakes up your life. You see that a whole set of things you didn’t think were possible are clearly possible.

In 1982, as now, mainstream feminism was largely hostile to sex worker rights, but people from diverse strands of the movement began showing up at the church: sex workers from across the country; homeless sex workers; drug users; migrants, students, cleaners; Black women’s organisations; Andaiye from Guyana’s Working People’s Alliance, part of the Caribbean Black Power movement; members of lesbian organisation Sappho. Also present were women from the peace camps of Greenham Common, many of whom were white and middle class, radicalised perhaps by a first brutal encounter with a police force previously imagined to be protectors.

‘It was striking’, Walker says. ‘All kinds of people were crossing divisions’. 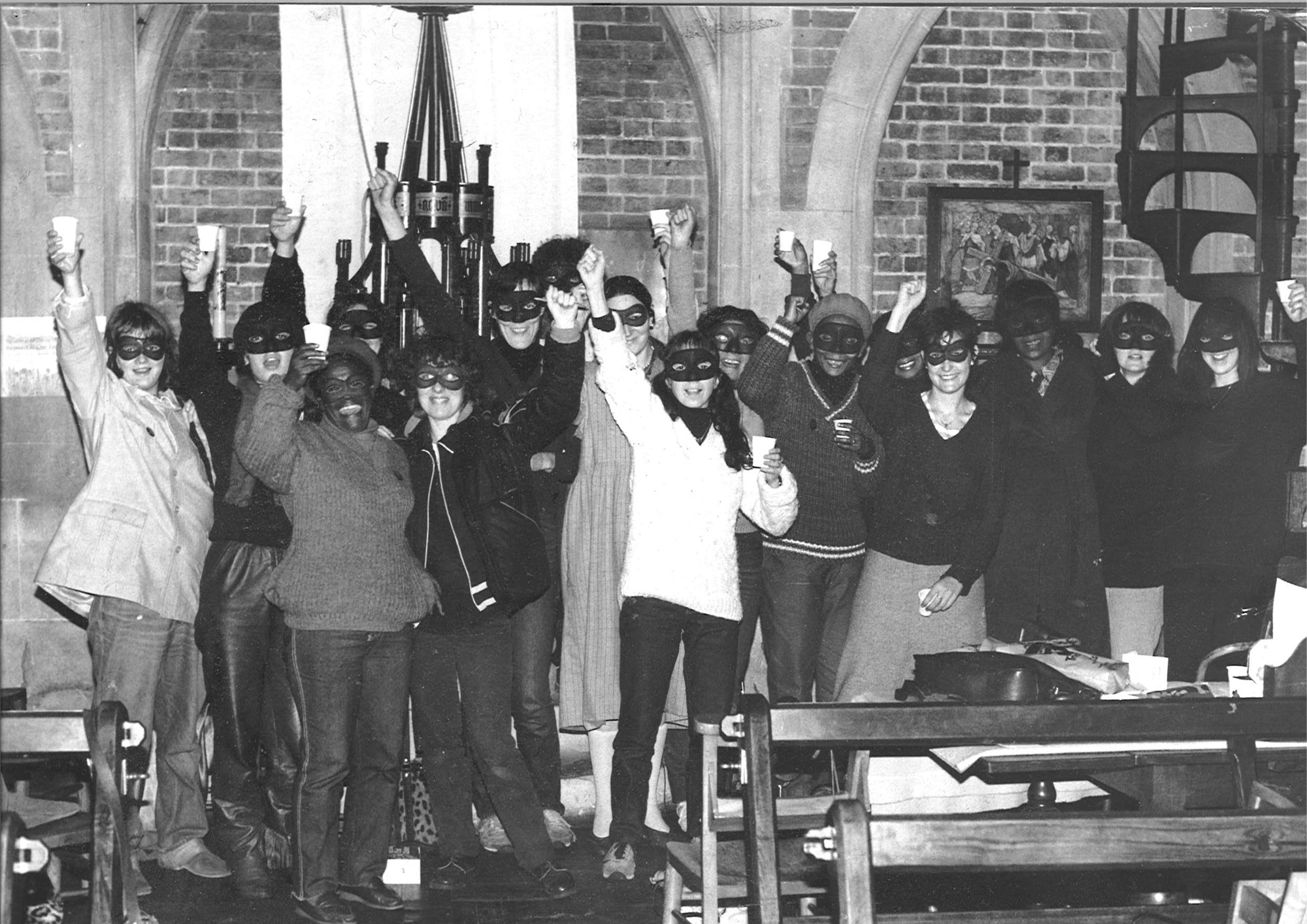 Most in the occupation had no illusions about the neutrality of the police. In a letter asking the chair of the Greater London Council Police Committee to meet the occupation, a Black woman wrote that SUS laws (essentially a stop and search measure which had been used so disproportionately against people of colour that it sparked nationwide riots and was repealed – in its then current form – in 1981) were to young Black men what prostitution laws were to Black women.

Selma James, co-founder of the International Wages for Housework Campaign, and coordinator of the Global Women’s Strike, was spokesperson for the ECP. In her 1983 account of the occupation, Hookers in the House of the Lord, she writes:

In the immediate aftermath of the occupation, sex workers experienced both gains and pushback. Public awareness had been raised, and sex workers had felt a solidarity which would propel them forward. However, the report which the occupiers had demanded – comparing illegal arrests of sex workers before and after a monitor was allocated to oversee the police in King’s Cross – came out lacking data on arrest numbers. The monitor’s report made no mention of the occupation. James writes:

Anyone reading it now would never suspect that her job was the product of our struggle. Making us invisible was not an oversight. … What we are witnessing before our very eyes is the process whereby women’s struggle is hidden from history and transformed into an industry, jobs for the girls. ‘Feminists’ making a career off prostitution has become a new branch of the sex industry and is as much pimping off women as men have ever done.

Looking back at the occupation is bittersweet. So many of those sex workers’ demands are still our demands today. Change has come, but not enough.

In 2020, while selling sex is legal in the UK, almost all activities which enable you to do so safely are criminalised. Soliciting is illegal, as is sharing premises with another worker. Despite warnings from every current sex worker-led organisation on the planet [1] – in the UK groups like SWARM (the Sex Worker Advocacy and Resistance Movement) and Scot-Pep, alongside the ECP – many MPs and high-profile feminists are calling for the implementation of the Nordic model (or ‘End Demand’ model), a form of criminalisation which makes the purchase of sex illegal. Already in place in the Republic of Ireland, Northern Ireland and France, as well as the Nordic countries from which it sprung, this form of legislation has been catastrophic for sex workers. In France, there has been a spate of killings of outdoor workers – almost all migrant, trans women – since the law was passed.[2]

On the ground, the policing of sex workers remains brutal, arbitrary and racist. Sex workers who report violence are still at risk of themselves being prosecuted.[3] In 2013, police in riot gear swooped on walk-up brothels in Soho, dragging women onto the street in their underwear, raids which were justified as anti-trafficking but which yielded no evidence of such.[4] Brothels are routinely raided and migrant women – including those from the EU – deported. Outdoor workers are regularly targeted by crackdowns. And all this by a police force known for its violence against women.[5]

In the 1980s, the link between widespread poverty and prostitution was such that sex workers became known colloquially as Thatcher’s Girls. Now, as austerity plunges millions into crisis, only exacerbated by the COVID-19 pandemic, the futility of focussing on policing and punishment is equally clear.

Sex workers are (still) calling for full decriminalisation, alongside an end to austerity, free education and healthcare for all – including trans healthcare – a reform of the immigration system and better support for those wishing to exit the industry.

Film footage from the Holy Cross Church makes the occupation seem distant, a historical moment, but 40 years is simultaneously a long time and no time at all. Many of the occupation activists are still fighting, some have died, and new people have joined the fight. Now, as then, much of the feminist movement likes to debate the efficacy of increased criminalisation, but sex workers’ message hasn’t changed.

Looking back at the occupation, it’s striking how mainstream feminism has so often been on the wrong side, painting sex workers as criminals or victims, and wanting to give police more power to control us. The Black Lives Matter movement makes a way forward, for all of us to speak and act more openly about police abuse we face, to be believed and to demand change.

With thanks to the English Collective of Prostitutes, Selma James and Sara Walker.

[1] In 2016, Amnesty International published its policy on sex work across the globe, calling for decriminalisation as the safest form of legislation. In response to criticism, 174 sex worker and human rights organisations signed an open letter of support.

Young Greens: Sex work – is decriminalisation the answer? Metro: The dark and dangerous reality of racism in sex work