We spoke to The English Collective of Prostitutes about their new ‘Make All Women Safe’ campaign, which takes aim at legislation that coerces women into working alone. 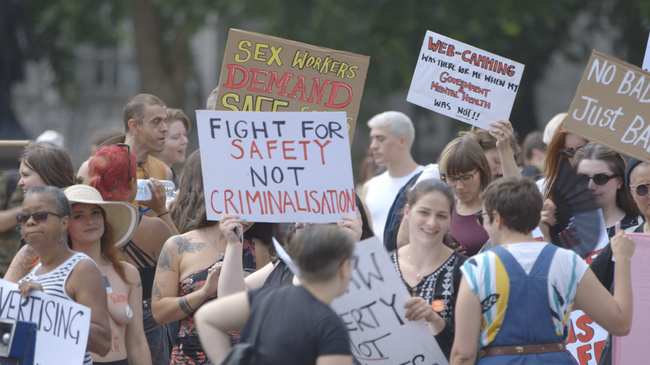 “Nobody should ever be promoting the criminalisation of sex work without first acknowledging the danger it puts us in.”

These are the words of Niki Adams, a spokeswoman for the English Collective of Prostitutes (ECP), who has firsthand experience of the legal injustices currently faced by sex workers. Although the exchange of sex for money is legal in the UK, a complex web of other laws around sex work are being used to harass workers, steal their earnings and push them into dangerous conditions. Established in 1975 and inspired by a similar collective in France, the ECP has long been fighting to improve the lives of sex workers in England, but now they’re taking action. Their newly-launched Make All Women Safe campaign takes aim at legislation that coerces women into working alone, and is accompanied by a petition for full decriminalisation that already has close to 5,000 signatures.

MPs still shy away from these kind of discussions in Parliament. Labour MP Dawn Butler hinted at this last month when she chaired the presentation of an ECP research report, which compared the experiences of women across different employment sectors to prove that sex work isn’t uniquely exploitative. The findings showed that sex workers earned more, worked less and had a greater degree of flexibility, and that although exploitation was commonplace among predominantly “female” professions, theirs was the only one to be criminalised.

There are plenty of myths around sex work and the impact that decriminalisation could have. “That’s why we made sure the ‘Make All Women Safe’ campaign was so informative,” Adams tells me over the phone. “People say: ‘Well, what about trafficking?’ There’s a law against that. ‘What about rape?’ There’s a law against that too. When New Zealand decriminalised sex work it didn’t also decriminalise rape and trafficking.” If anything, legislation is stacked against sex workers, as Adams explains: “Reporting a crime requires a calculation. Is it worth revealing where we work, or will police use that to raid us, arrest us, close us down? It’s even worse for migrant women – there’s an obvious fear that they’ll be threatened with deportation.”

Image via the ECP

Unsurprisingly, migrant workers are disproportionately targeted by raids. More shocking is that there are incentives for police to raid premises and seize assets. “The Proceeds of Crime Act 2002 is widely used against sex workers,” laments Adams. “Police are primarily interested in what they can get from you, and it’s easier for them because the burden of proof is reversed. So they can come after your house, your savings and even money you’ve put aside for your children. Women are being cleaned out.”

You might be wondering where this money goes, and the answer is suspiciously hard to find. Circumstances vary, but Adams outlines that the money tends to be split between the police, the Crown Prosecution Service and the Home Office. Some is used to cover prosecution costs, but much can be spent at police discretion. Essentially, this means migrant sex workers risk having their earnings legally stolen and then spent on their deportation – a risk that’s heightened by the Home Office’s history of dangerous negligence, which has resulted inimmigrants being sent to countries where they have no family, no life and – in the most extreme cases – little chance of survival.

One “solution” often proposed is the Nordic Model, which criminalises the client but not the sex worker. The idea is to slash demand, but by doing so the law strips some sex workers of their income and forces others to accept low rates and compromise their safety to get any work at all.

The model has been proven to be ineffective, yet it’s been supported in Parliament by MPs including Sarah Champion and Jess Phillips. “These women call themselves feminists and promote criminalisation of clients in the name of gender equality,” says Adams, audibly annoyed. “We feel strongly that this is pretty awful and outrageous. They know that prostitution is being driven by the increase of poverty, and that women have been disproportionately affected by austerity. If they were genuinely interested in reducing prostitution – which I’m all for; we’re hardly promoting it as a glamorous job! – they should be focusing on the economic policies pushing women into sex work in the first place.”

Instead, criminalisation is often justified by two arguments: that it saves victims of sexual violence and it helps women out of sex work. But there’s legislation like the Modern Slavery Act to fight human trafficking, and the experiences of sex workers show that criminalisation paradoxically forces them to stay in sex work.

“Once you’ve been criminalised, that shows up on any employment police check,” says one woman from the ECP network, who asked to remain anonymous. “I was offered work as home help, but because it entailed working with vulnerable adults and children I would have needed the advanced police checks. The job was well-paid and fit perfectly with my life caring for my disabled child, but I couldn’t risk them finding out – my child could have been taken from me.”

Another issue is that police have extreme power when it comes to law enforcement, particularly with street-based offences like loitering and soliciting. Then there’s the dreaded “prostitute caution“, which can be assigned at will without any admission of guilt needed. It stays on your record until you’re 100 years old, and often blocks sex workers from employment and housing. The official line is that police should engage sex workers with services, but this isn’t happening. “We get stuck in something we can never get out of,” says another anonymous sex worker from the ECP network. “I have a record now, so I can’t get another job.”

Decriminalisation could also reduce the stigma around other sex workers, including strippers, cam girls and women working alone. “It would allow for people to safely access health services and support networks, and the main benefit would be that we could work together to ensure safety,” says Alice, a trans, non-binary escort. “I screen clients through a website, send the details of a booking to a group chat of close friends and check in with them before and after. But I would love to be able to rent a space with other sex workers – it would guarantee my safety so much more.”

Unfortunately, sex workers can’t rely on police for their safety. Adams recalls one “particularly surreal experience”, of a large-scale raid apparently intended to stamp out trafficking. “Around 250 officers – some of whom were in riot gear – stormed in and handcuffed women on the floor,” she tells me. “No victims of trafficking were found, but women were prosecuted for minor offences and some migrants were threatened with deportation. Our experience is that the police can be brutal, racist, threatening and in some cases violent.”

Add this to the stigma around sex workers and you have a lethal cocktail of discrimination. Adams recalls working alongside Women Against Rape to privately prosecute a man who had been cleared on the grounds of “unreliable witnesses”. He soon began threatening victims’ families, so they sought an injunction and resumed the fight. “We know that rape conviction rates are appallingly low and that sex workers’ jobs are used against them – in this case, it was used over and over to discredit the women and justify a character assassination,” says Adams. “But we got the guy convicted and imprisoned for 14 years on the exact same evidence that the CPS said was insufficient to even prosecute.”

Sex work is already legal in most cases, but police are being given the power to convict workers – especially street-based workers – if they feel like it. The Proceeds of Crime Act is giving officers an incentive to raid, and nonsensical laws are prosecuting sex workers who choose to work together for safety reasons. Women are being legally robbed, pushed into danger and branded with cautions that essentially prevent them from ever exiting sex work or building a life for themselves.

Decriminalisation would help bring an end to all this, and it would also make life safer for legal workers. Stripper rights activist Stacey Clare argues that it would send a message that “trying to erase the sex industry through criminalisation is the wrong approach – it just pushes it underground where abuse and exploitation thrive”. Strip clubs have been targeted for years by anti-prostitution feminists, who have succeeded in tightening licensing laws, leading some owners to charge women large house fees just to work. “We might not be criminalised, but there are some campaigners who would give their right arm to criminalise us,” Clare says.

These are vital conversations, but they’re being shut down because of stigma, misinformation and a misguided belief that increased policing is always the answer. Some sex workers – white, middle-class “happy hookers” – are celebrated and even praised within media, while marginalised sex workers are pushed aside and coerced into silence by the illegal nature of their work. As a result, we’re seeing a one-sided debate that is lacking in nuance, driven by judgment and morality instead of logic and justice.

“People don’t want to engage with it. I remember one woman describing sex work as ‘icky’,” laughs Adams. “That’s fine – you’re allowed to find it icky! But what you’re not allowed to do is let your own moral judgments get in the way of vital policy change.”