VICE: ‘People’s Lives Are at Stake’: Sex Workers Went on Strike This Weekend

On International Women’s Day 2020, sex workers and allies gathered in Soho to protest for decriminalisation.

In today’s world of corporate feminism and #girlboss tees, it’s easy to lose sight of what International Women’s Day actually represents. That was not the case in Soho on Sunday, where the streets were filled with pissed-off sex workers on strike.

On March 8th, sex workers refused to sex/work for money or “carry out the domestic, sex and care work that we are expected to do for free”. Instead, sex workers gathered in central London to protest for decriminalisation, outline the harm of the Nordic model and celebrate the recent victory of a stripper who took her club to court and won. They waved placards and chanted slogans – “no borders, no nation, stop deportation!” – that demonstrated intersectional feminism in practice.

The action kicked off with a powerful speech by Lydia Caradonna, a founding member of grassroots campaign group UK Decrim Now. “I’m not going to bore with policy or anything,” she said. “I’m just going to tell you why I’m striking, and if it resonates, I want you to yell back at me.”

In just two minutes, she ran through a list: “for the immigration raids described as ‘welfare checks’… because my manager takes too much of my money… because we get fined for soliciting… because the law aims to isolate us… because of exploitation, violence and stigma… because my work should not cost me my life… because the government pushed me into sex work, and is now punishing me for being here.” The crowd response was deafening, and followed up by a “minute of noise” for the sex workers already murdered this year. 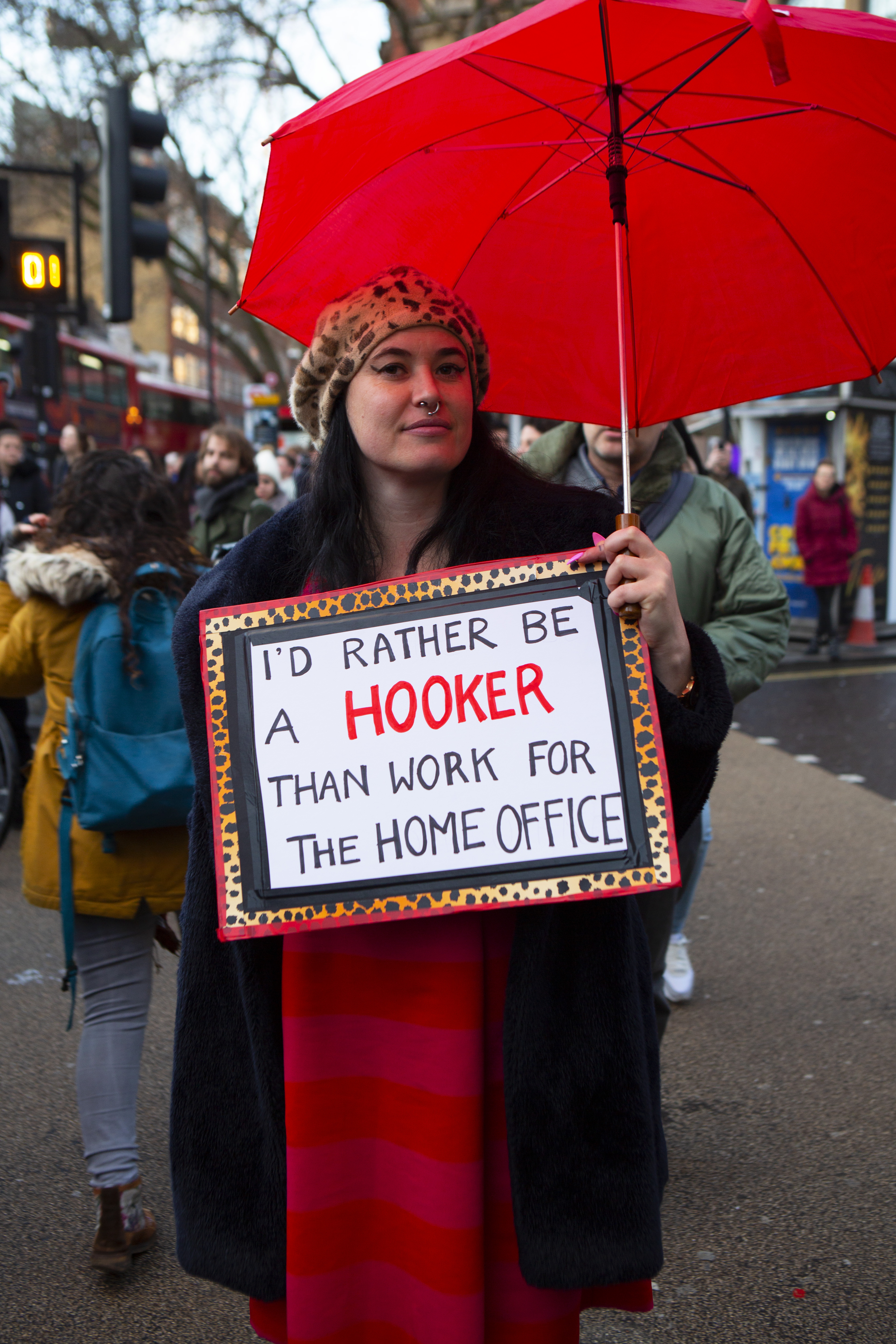 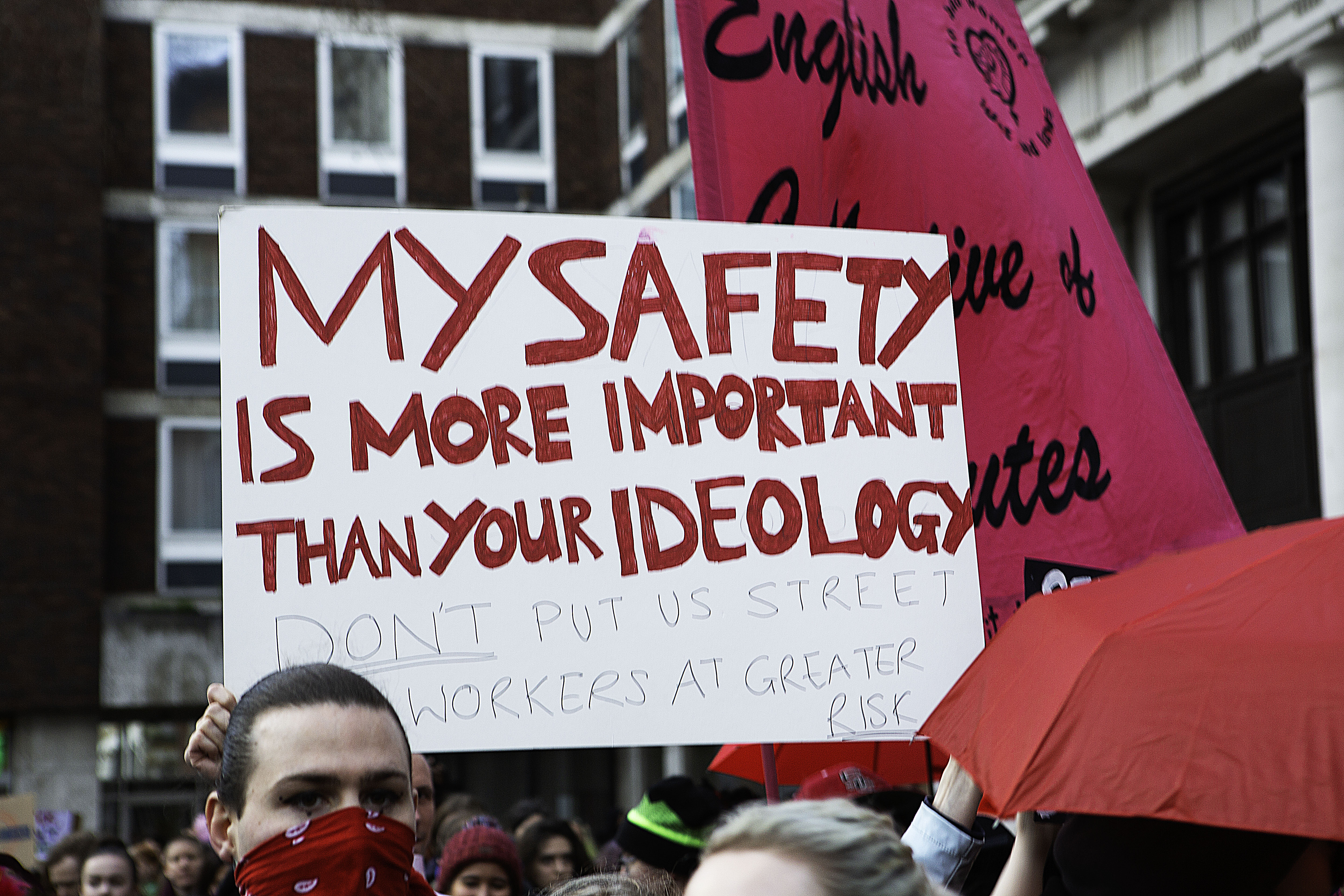 As a huge sound-system flicked between bangers – “Bitch Better Have My Money” and “Sisters Are Doin’ It For Themselves” are obvious choices, Dua Lipa’s “New Rules” less so – the procession started to march, chanting snappy slogans like: “Blow jobs are real jobs and real jobs suck!” Before long, the crowd blockaded traffic at Piccadilly Circus – and despite one man edging his car closer (protestors swarmed him and the police intervened), the march largely went off without a hitch.

Hours of protest wrapped up outside the Royal Courts of Justice, where Juno Mac, the co-author of Revolting Prostitutes, gave yet another rousing speech, highlighting legal isolation of sex workers. 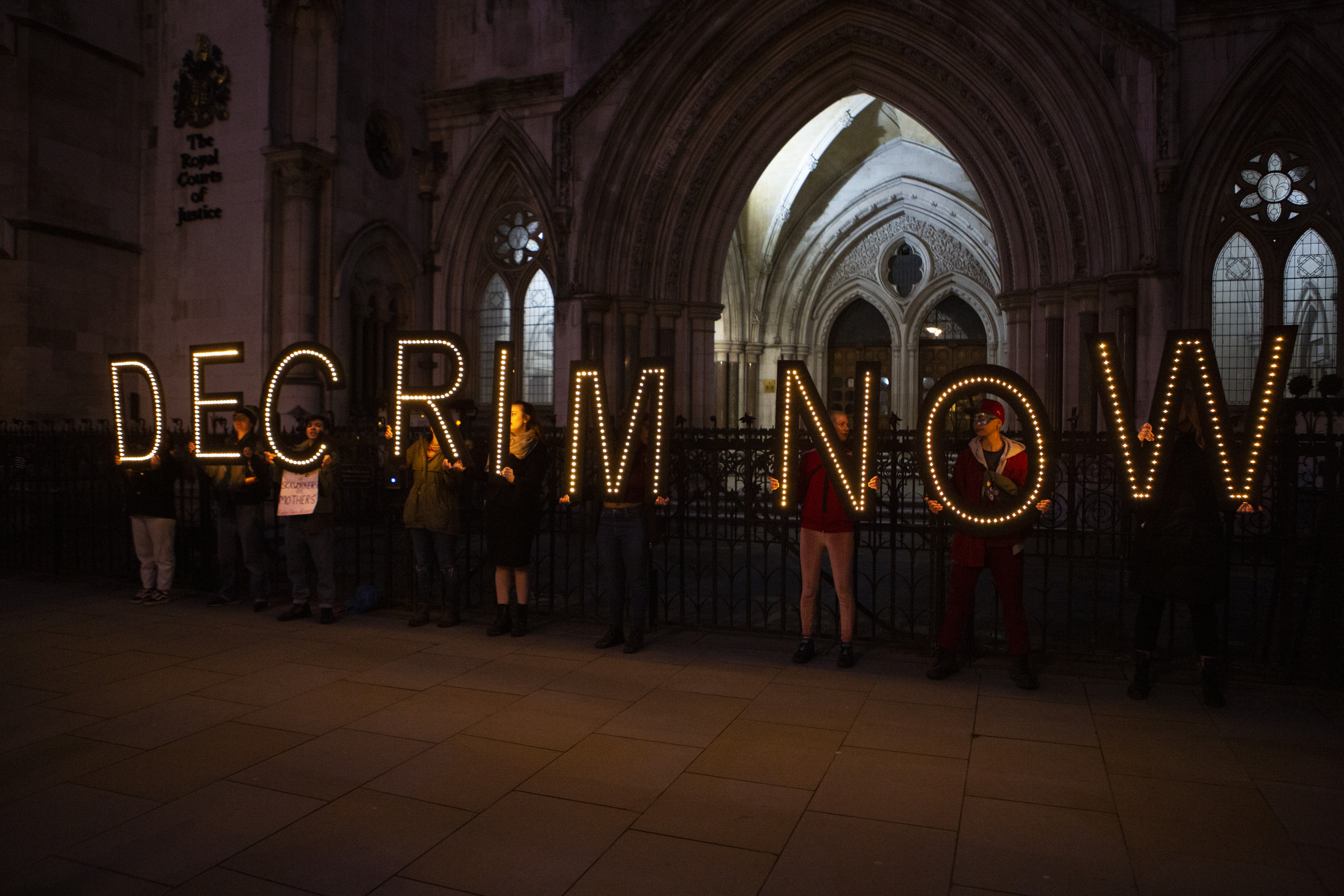 As it stands, sex workers can’t share premises in the UK without risking persecution under brothel-keeping laws, and politicians are still ignoring decades of evidence from New Zealand that decriminalisation genuinely does work. More frustratingly, sex workers are rarely at the table for these discussions. Today’s crowd was filled with the colourful feathers of masquerade masks, but these weren’t just accessories: sex workers risk being doxed, harassed, abused or disowned by their families, so many aren’t ‘out’ to the public.

But the fight continues, and it’s largely led by grassroots organisations like SWARM and the English Collective of Prostitutes, whose representative Laura Watson speaks passionately of the raids, assaults and deportations that remain commonplace. “More women are fighting with us against criminalisation and abuse,” she said, recounting the story of a sex worker told by police that she had to report the violence she faced three times before they could act. These victims are often deemed “voiceless,” yet when they do speak of sexual abuse in traumatic court hearings, they’re rarely met with justice.

With that in mind, VICE spoke to a handful of striking sex workers and allies about their personal reasons for marching. From trans allyship and online discrimination to entrepreneurial spirit and solidarity with sex workers unable to march, these are their motivations. 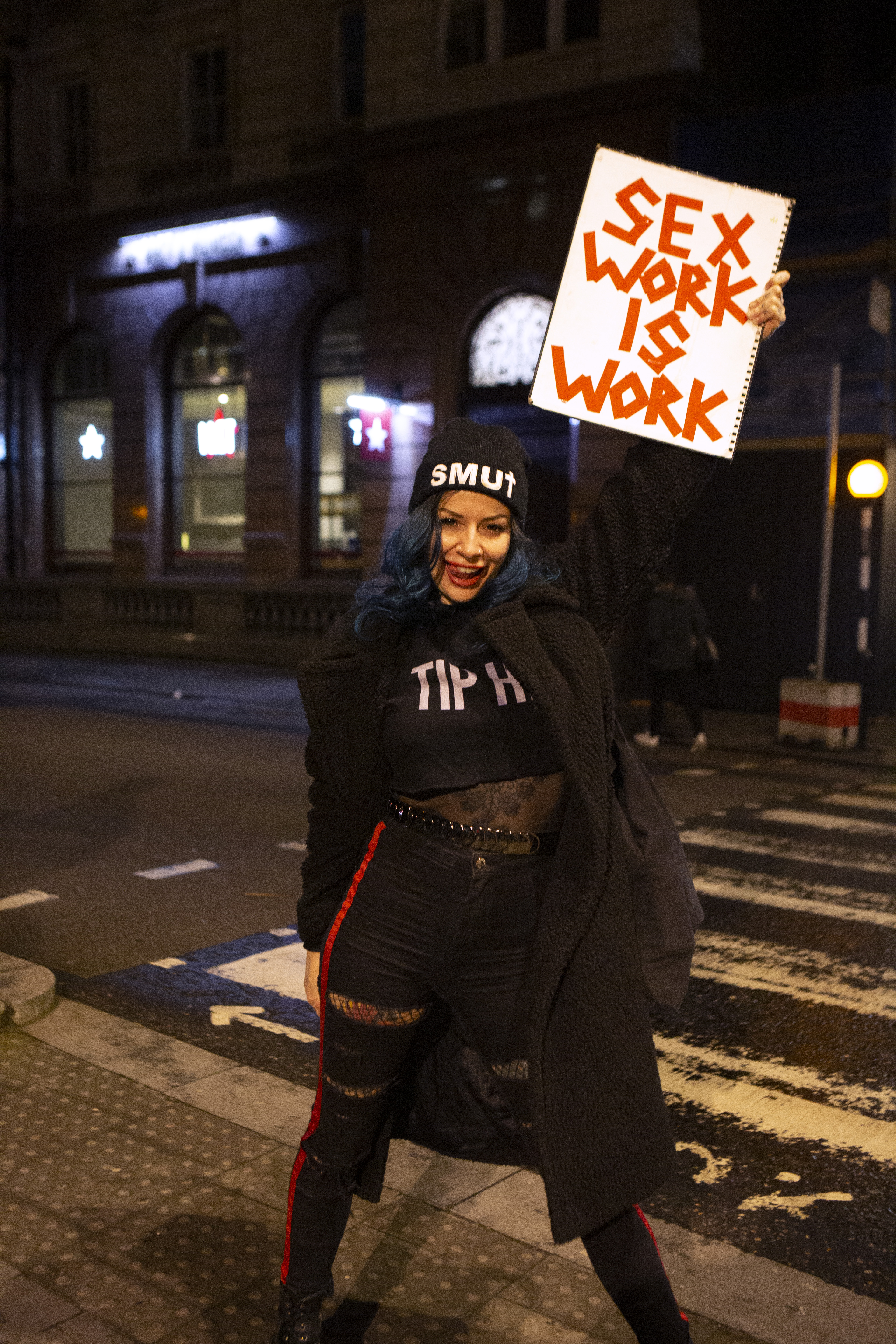 “I’ve been a sex worker for about ten years, so I’ve obviously been keeping up with sex workers’ rights and the historical oppression of sex workers. It’s one of the main reasons we’re here today: to advocate for decriminalisation of full-service sex work. It’s a huge issue and people’s lives are at stake, but it trickles down throughout the industry. Sex workers are being kicked off social media platforms at a rate of knots, so I’ve protested outside of social media headquarters and I’m actually taking Instagram to court for discrimination against sex workers. I think someone needs to stand up for us, and it’s amazing to see everyone come together: full-service workers, dancers whose clubs have been closed. It’s nice to have us all in one place on one day.” 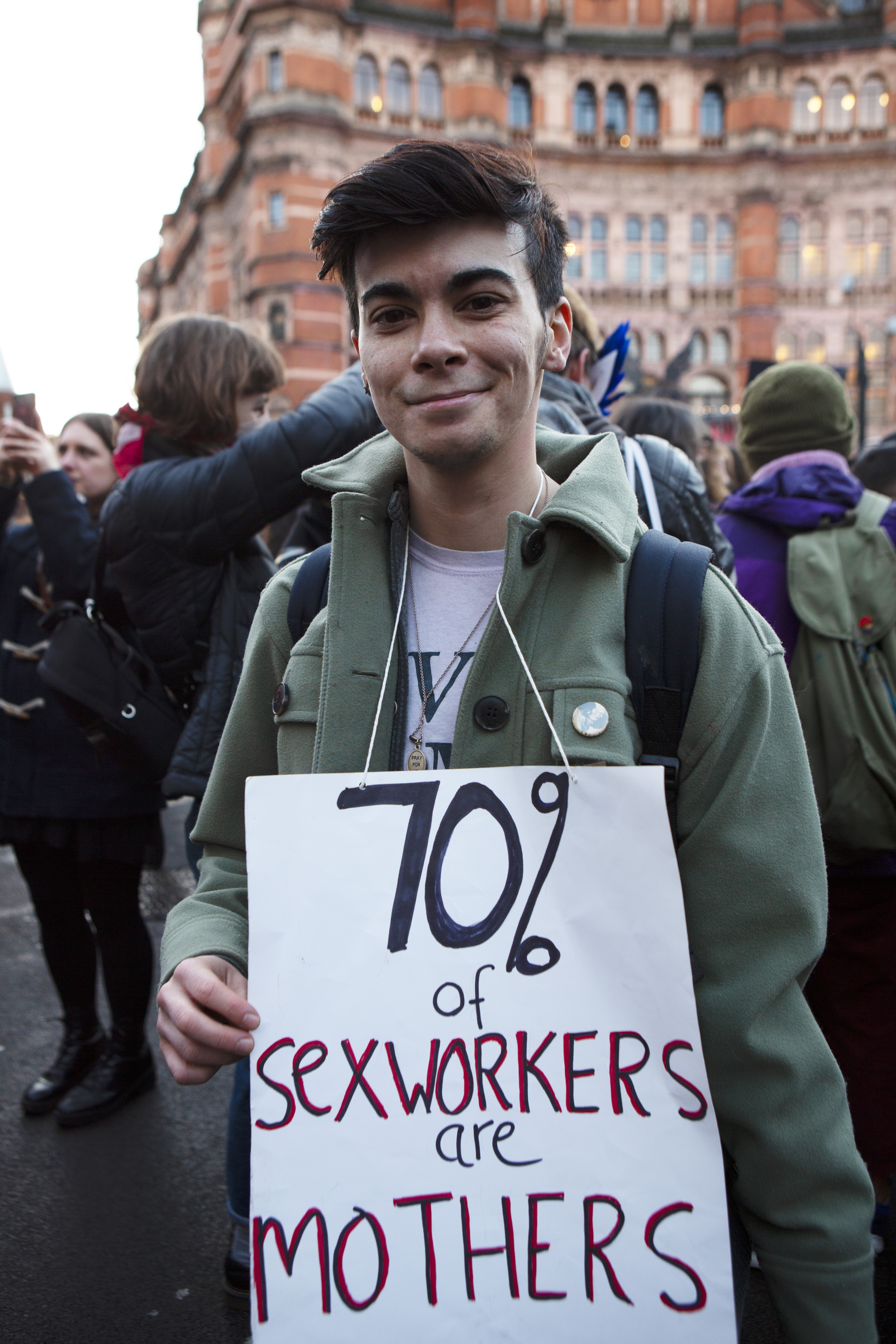 “I’m supporting the strike because I’m a trans man, and we are natural allies of sex workers. They’ve fought for our rights for as long as there’s been a fight, so we should be giving them solidarity in return.” 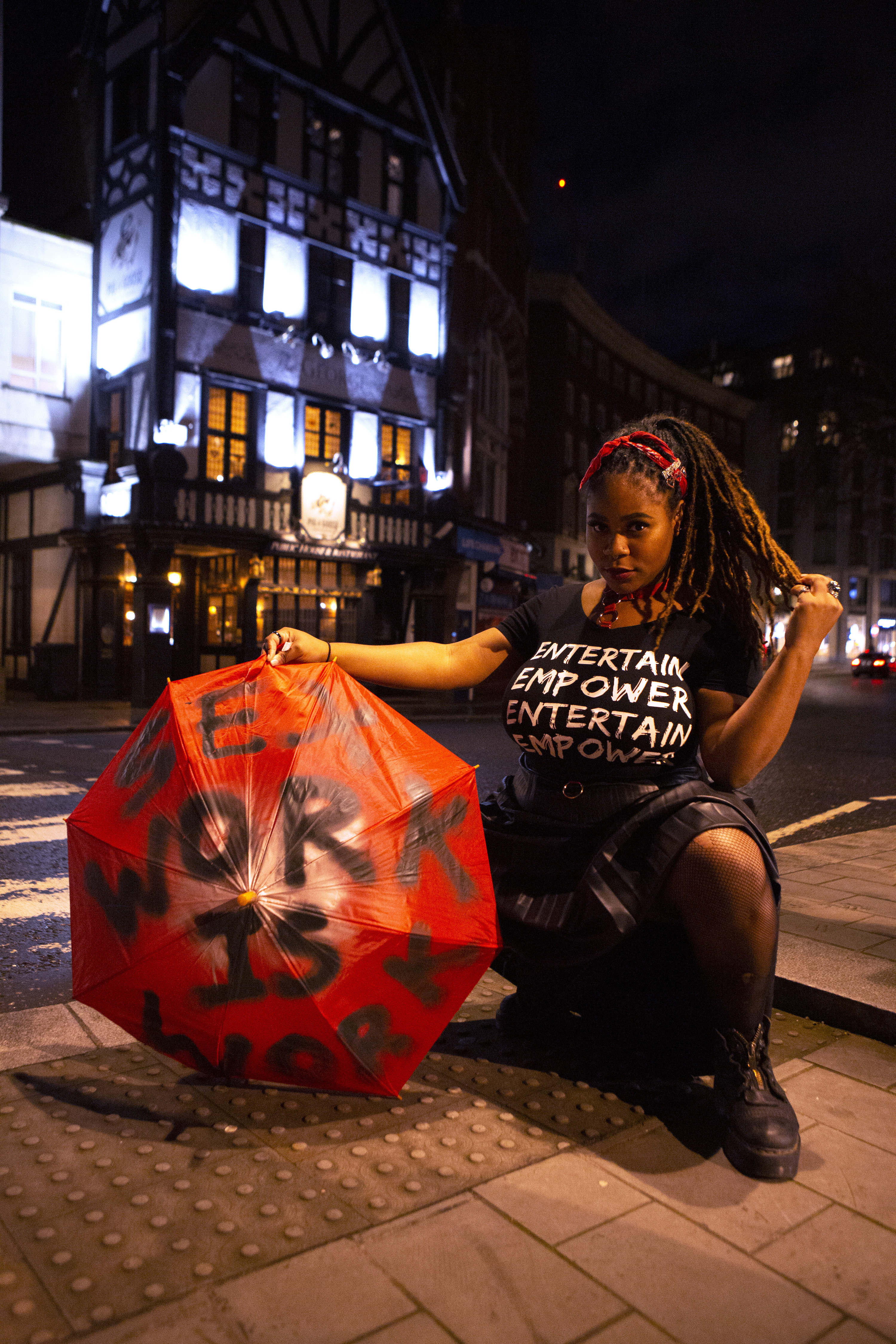 “I came here with United Strippers of the World. I was invited by one of their union leaders to do a little demonstration with their sex worker rights umbrellas, and to basically get everyone involved and get the party started. Ultimately, I’m here campaigning for people that can’t. I’m a sex worker and a dancer, but I know there are lots of people all around the world who couldn’t make it here today. Either they’re in cities where no marches are happening, they don’t feel safe enough or they’re not comfortable enough for legal reasons to come and protest for their rights openly. So I’m here for myself but also for those other people, because it’s a beautiful thing to be able to be open about your political beliefs.” 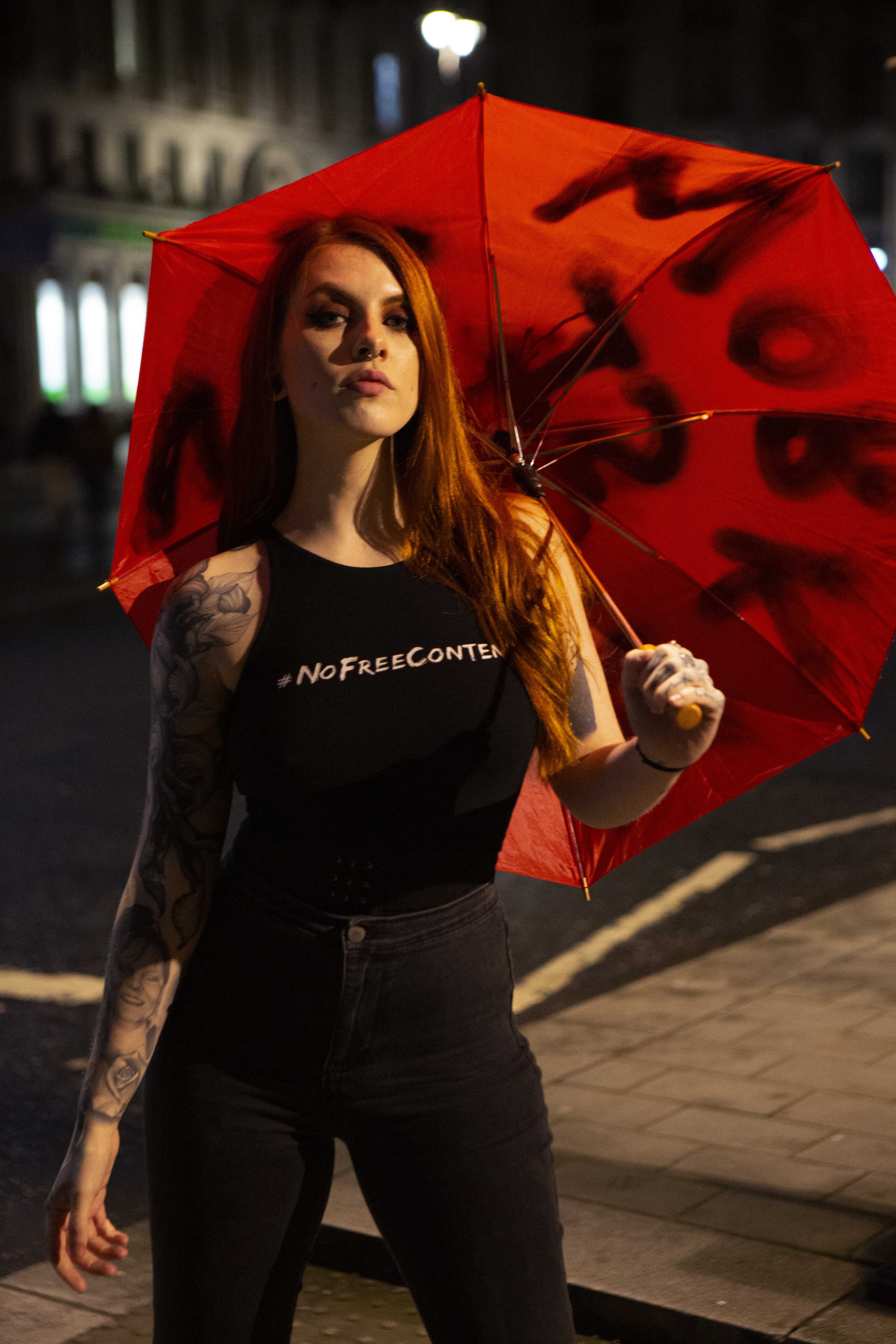 “Today, I’m here with the rest of my peers fighting for sex workers’ rights. The chant we heard earlier was ‘a blow job is better than no job,’ and I can’t agree more! I actually have a non-profit, sex worker online clothing store – The Safeword Project – that I run, and we have raised a lot of money for Pineapple Support, an incredible online therapy service for sex workers. Basically, what we’re here to do is fight for our rights: how can we thrive if we are vilified?” 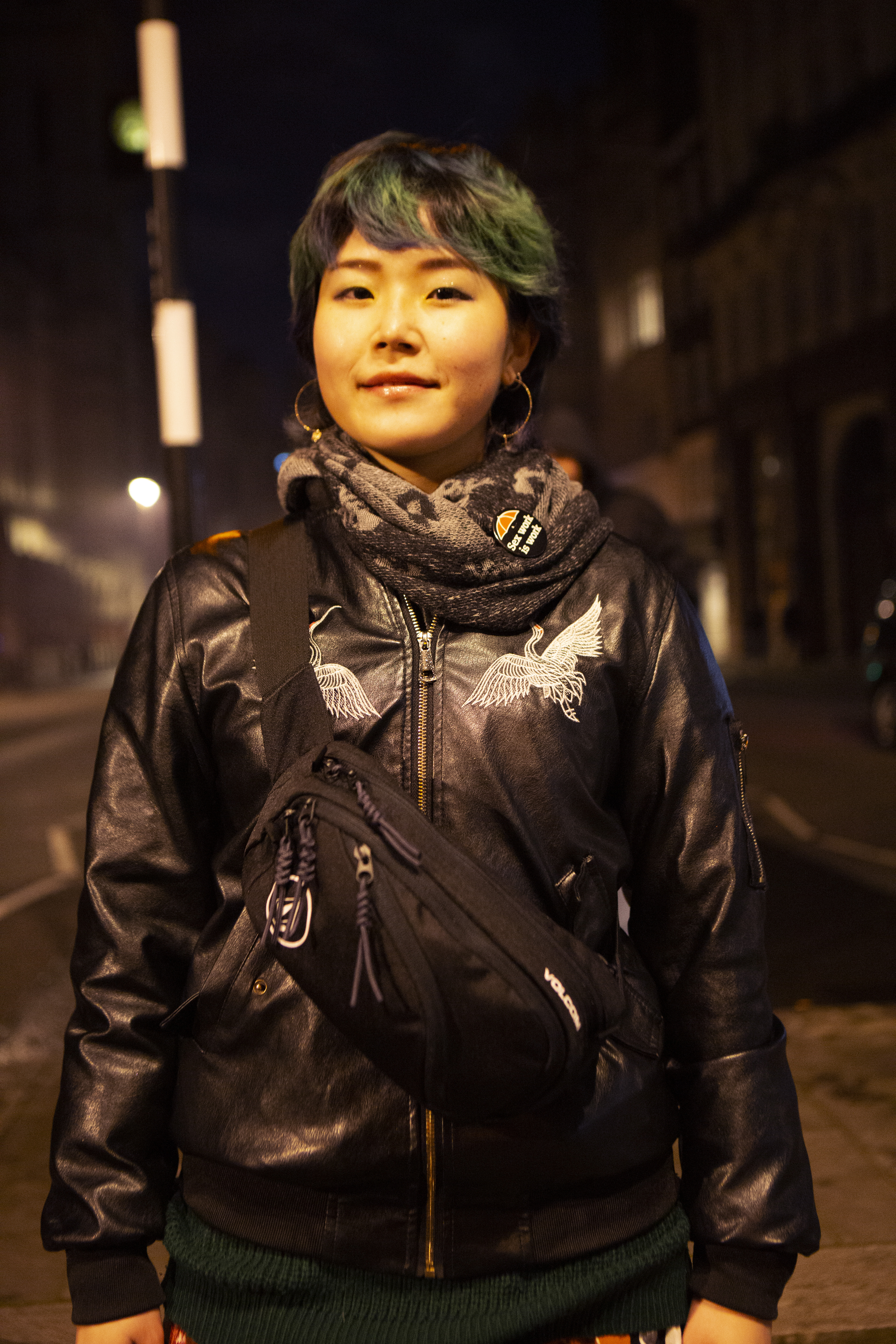 “I’m a Japanese sex worker studying human rights in the UK, so that’s how I heard about the strike. The media loves to show sex workers only as innocent or beautiful, but it’s all so weird to me. Even though sex workers are being raped, we aren’t allowed to say anything, so that’s why I believe decriminalisation is so important. There’s a culture of policing, of saying that it’s our fault – but we should have our say in human rights, because we’re humans.”