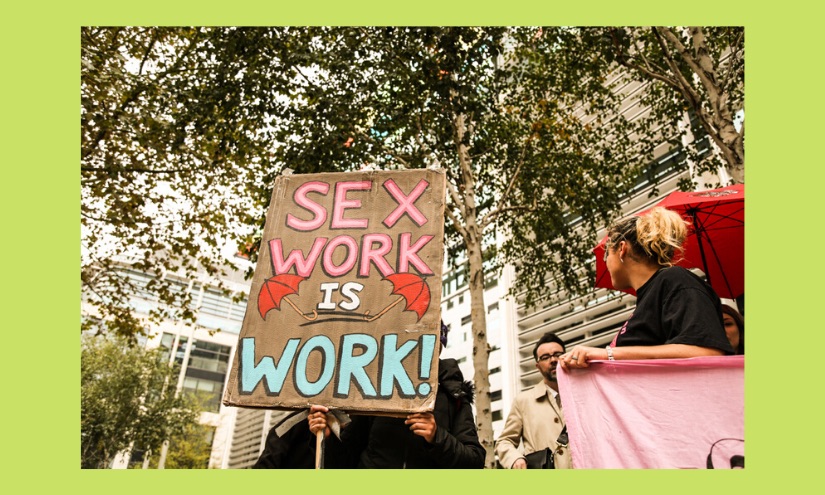 ‘Sex workers are the original feminists’, say Juno Mac and Molly Smith in Revolting Prostitutes. It’s an incendiary claim–not least because tracking ‘firsts’ is a fraught pursuit–but it might well be true. Mac and Smith point toward the medieval brothel workers who formed guilds and went on strike; the 15th century Bavarian prostitutes defying politicians to describe their work as work; and 1917’s ‘original Women’s March’, when 200 San Francisco workers marched against brothel closures. Now, with the outbreak of COVID-19 and social distancing currently decimating the incomes of in-person sex workers–who are mostly women–activists from SWARM have recently set up a hardship fund, which gives grants to support those of the community who are facing poverty. Even so, sex workers’ considerable, ongoing contributions to feminism are generally ignored. When they aren’t ignored, they are denied, vociferously. 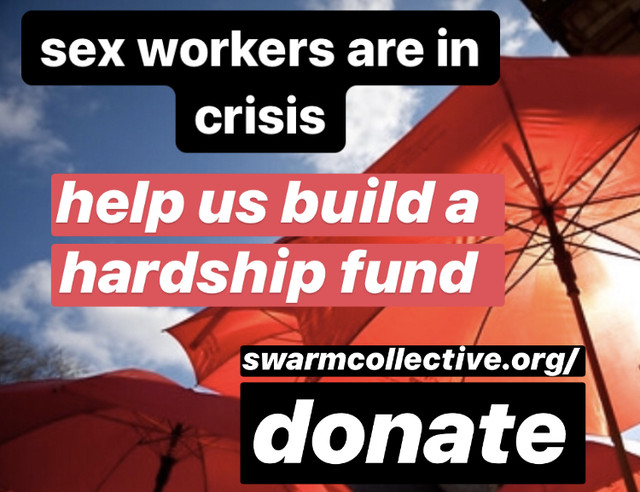 I first encountered sex work activists ten years ago, at a Reclaim the Night march. Ahead of me marched a group of women bearing bright red umbrellas: a global symbol of sex worker activism. One carried a placard which read, ‘Sex workers need feminism, and feminism needs sex workers’. Later, the sign-carrier got into a fight with another woman at the protest. The other woman was shouting, jabbing her finger furiously towards the sex worker’s face. Not only did she not agree with the sign, its existence made her angry. Her anger is part of a broader, systemic erasure: feminists may speak for sex workers–when they are imagined as victims–but sex workers are not allowed to speak as feminists. When they do, they provoke outcry, fury, delegitimisation. If a sex worker’s speech contradicts a non sex working feminist, she must be deluded, she must be a shill for male interests, and besides, how dare she. This erasure of sex worker activism from feminism speaks volumes about which women are allowed to write herstories, who has the power to self-memorialise, to determine whose actions are worth remembering. As feminists, sex worker activists challenge the feminist canon.

The movement may have been written out by women with a vested interest in painting a more sanitised, less challenging picture, but the work is there. The contemporary UK movement originated in 1975, when PUSSI and the English Collective of Prostitutes (ECP) were formed. These original groups varied in their politics: the more marxist-feminist aligned ECP were inspired by the occupation of French workers in Lyon, and started within the London branch of the Wages for Housework campaign. Set up shortly before, the more short-lived PUSSI attempted, strangely, to combine its concern for marginalised workers with supporting ‘a fair deal for clients’. Over time a radically left wing movement has grown up in the path of the ECP, today including SWARM (Sex Worker Advocacy and Resistance Movement), SCOT-PEP, X:talk, SWAI (who are active in Northern Ireland as well as the Republic of Ireland), the Scotland-based UK Network of Sex Work Projects, Decrim Now, and those currently organising with the United Voices of the World union[1].

The Problem of the Law 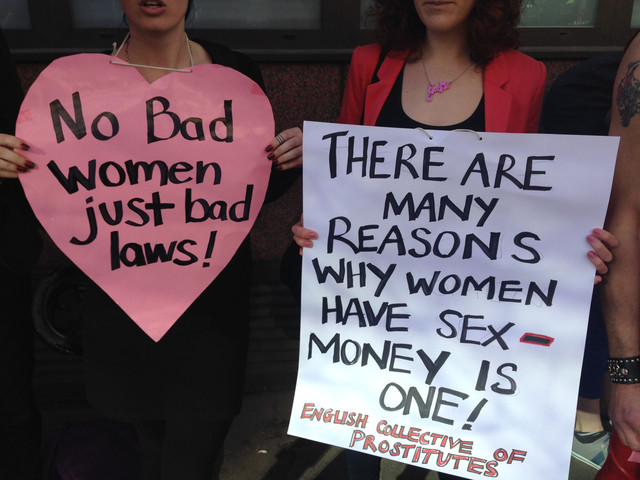 Sex worker groups unanimously, around the world, agree on the central demand for the full decriminalisation of sex work. This is not the end-point of sex worker activism, but it is a necessary first step. Currently in England, Scotland and Wales, selling sex is ostensibly decriminalised, but brothel-keeping, collective working, soliciting, loitering, incitement, kerb-crawling and third-party management are all illegal. Northern Ireland adopted ‘the Nordic Model’ in 2015, criminalising the purchase of sex. This partial criminalisation makes it illegal to work with a friend for safety. Full decrim, as the ECP put it in their first public statement, written in 1976, means ‘all the laws on prostitution be removed’. Decrim is intended to make way for workers to self-organise, share spaces, or move into other work if they want to. Sex worker groups oppose legalisation, which green-lights government regulation of sex workers. In Germany, legalisation means prostitutes are forced to sign a register and are subject to invasive health tests, creating a still-illegal underground economy for those who are not willing to do so.

During the 1981 trial of Peter Sutcliffe for the murders of 13 women, the attorney general had divided those who worked as prostitutes from those who did not, stating: ‘Some were prostitutes, but perhaps the saddest part of the case is that some were not. The last six attacks were on totally respectable women.’ The ECP picketed the High Court for two weeks. In this climate, in 1982 the ECP occupied the Church of the Holy Cross in Kings Cross, opposing the police brutality and racism towards the prostitutes working in the area. At the time, police were targeting local workers, arresting their partners on pimping charges, and threatening to remove their children. The ECP, with Women Against Rape and Black Women for Wages for Housework, entered the church with a banner reading ‘Mothers Need Money. End Police Illegality and Racism in Kings Cross’, and stayed for twelve days. The occupation garnered widespread support from sex workers across London and outside, lesbian activists, women from Greenham Peace Camp, and other church members. It also drew mainstream media opprobrium and political condemnation from those do not care about violence against the ‘wrong’ kinds of women. As ECP member Sarah Walker says: ‘The core issues are still relevant today, which are: police violence against sex workers; the whole question of women’s economics…all kinds of women do sex work, many immigrant women, many women of colour, women with disabilities…those issues came out in the occupation and are still being played out today.’[3] 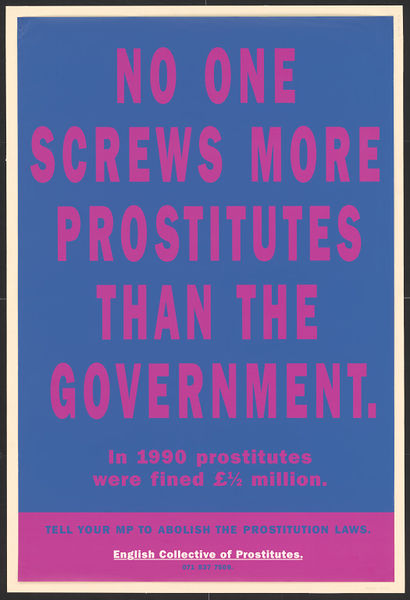 In the 1990s ECP ran a major pro-decrim advertising campaign, with giant posters in 70 locations carrying one of four slogans: ‘No one screws prostitutes more than the government: In 1990 prostitutes were fined £1/2 million’, ‘What do you call men who take money from prostitutes? Magistrates.’ , ‘Practicing safe sex can get you arrested. Prostitutes are arrested for carrying condoms.’, and ‘What’s the difference between a phone company and a prostitute? One charges 48p per min for sex, the other gets charged in court.’ One of the most significant sex-worker led actions was in 1995, when ECP and Women Against Rape succeeded in supporting two women working as prostitutes to bring the first private prosecution for rape in England. The Crown Prosecution Service had previously dismissed the case on the grounds of insufficient evidence, despite the rapist having had a previous conviction for attempted kidnapping. Using the same evidence, the rapist was eventually convicted and sentenced to 11 years in prison. Though many activists in the sex worker movement ultimately support prison abolition, this action acts as an important precedent for opposing men’s ability to rape with impunity.

Movement conferences have also helped to build a sex worker-oriented feminism that connects the struggle of prostitutes, as workers, to that of other working class women, women of colour, disabled women, migrant women, queer and trans women, gender non-conforming people, drug users and people living with HIV. Having thrown their first week-long conference in 2009, in 2017 SWARM joined with SCOT-PEP and the arts organisation Arika in Glasgow, to hold a hookers’ ‘Festival of Resistance’. Across the four days, panels and discussions were held on reproductive justice, building the rights of migrant workers, experiences of criminalisation from across Europe, queer sex workers, and more. There were also film screenings and a performance evening. Last year, SWARM held their tenth anniversary conference: Decriminalised Futures, attended by over 300 sex workers, activists, and allies.

Today, the movement continues to organise around the core demand for decrim, which is also a demand against the interlocking violences of capitalism, patriarchy and white supremacy. In the midst of a culture war in which liberal cowardice does the work of legitimising the fascism of the resurgent right, the sex worker movement is winning some victories for public opinion. In 2016, decades of global sex worker campaigning paid off in Amnesty International’s decision to formally adopt a pro-decrim position. Last year in the UK, following dedicated work by Decrim Now, Beverley and Holderness CLP were the first branch of the Labour party to pass a pro-decrim motion. Dedicated, consistent and repetitive work providing evidence and first-hand experiences for government consultations–from groups and workers across the UK–make it difficult for any researchers following ethical practice to justify a pro-criminalisation stance. In 1917 prostitutes marched through San Francisco; in 2000 workers in Soho went on strike against the council’s attempted closure of their walk-up flats, and on March 8th, hundreds of sex workers and allies marched through the streets of London as part of the second Sex/Work Strike, the sex worker’s bloc of the larger women’s strike movement.

Sex worker activism is a vital part of the story of feminism in the UK, it radically transforms how we think about work, sex, emotions, care and sexuality. Selma James suggests that reluctance to admit the connections between sex and money in our own lives can express itself as prejudice against prostitutes: ‘whose job is to connect the two’. For women who do not want to believe that their sex with men–husbands, boyfriends or lovers–exists in a similar transactional context to that of a sex workers’ exchange with a client, viewing sex work as an important site of feminist struggle is hard. It is easier for some women to write off prostitution as an intrinsic violence than to accept that sex within capitalism is inextricably gendered, inextricably politicised. But until capitalism is abolished, there will be people who sell sex to survive, because selling sex is a preferable–and sometimes the only possible–alternative to poverty. Until that point, sex work is work, full decrim now.

[1] This is not a complete list and is not intended to erase the important labour of groups who are no longer in existence.

[2] It is impossible to coalesce 50 years of important action into one article of this length – these are just a few, and many others could equally have been chosen.

Independent: Sex workers left penniless and pushed into homelessness due to coronavirus Novara Media: Out of Work and Unsupported, Sex Workers Struggle to Cope With the Coronavirus Crisis