Shado-Mag: “There’s really no such thing as the ‘voiceless’. There are only the deliberately silenced, or the preferably unheard.”

It was Tuesday 2nd June, ironically, International Sex Workers’ Day. But there were no sex workers there. For nearly three months, the streets of Patpong, Bangkok’s oldest red-light district, were silent and deserted.

Two men sporting Covid-masks sit distanced at a streetside board game as a single hunched figure walks past briskly, clutching an umbrella. Unlit signs drip monsoon raindrops and swing despondently above meshed telephone wires and shuttered shop-fronts. A curled-up cat has slept out the storm on the pavement tiles which usually glow in a pink hue from the Pink Panther Club sign above. The doors, framed by two silhouetted female figures are padlocked firmly shut. Kenopsia: “The eerie, forlorn atmosphere of a place that’s usually bustling with people but is now abandoned and quiet. An emotional afterimage that makes it seem not just empty but hyper-empty, with a total population in the negative, who are so conspicuously absent they glow like neon signs.” 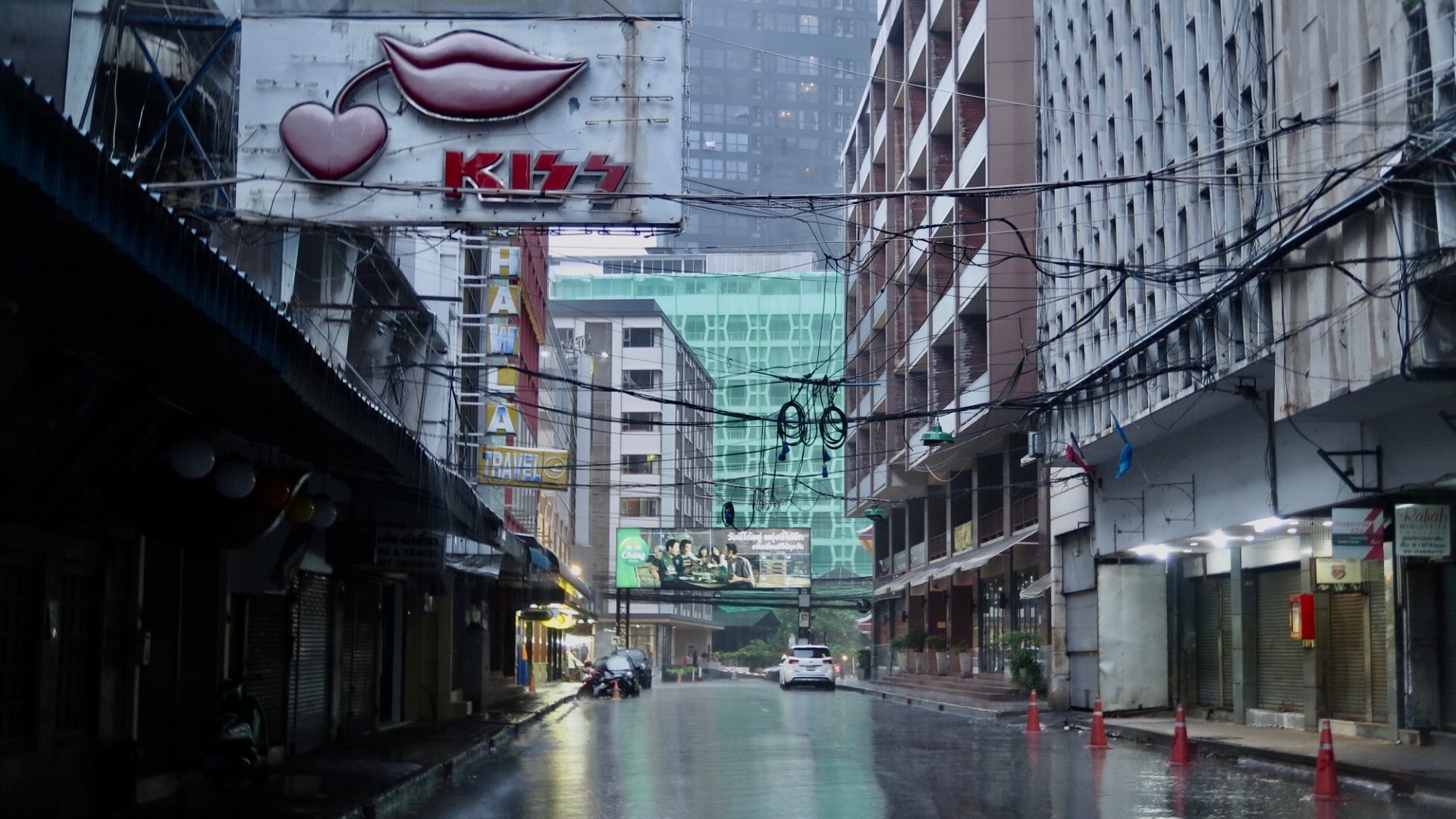 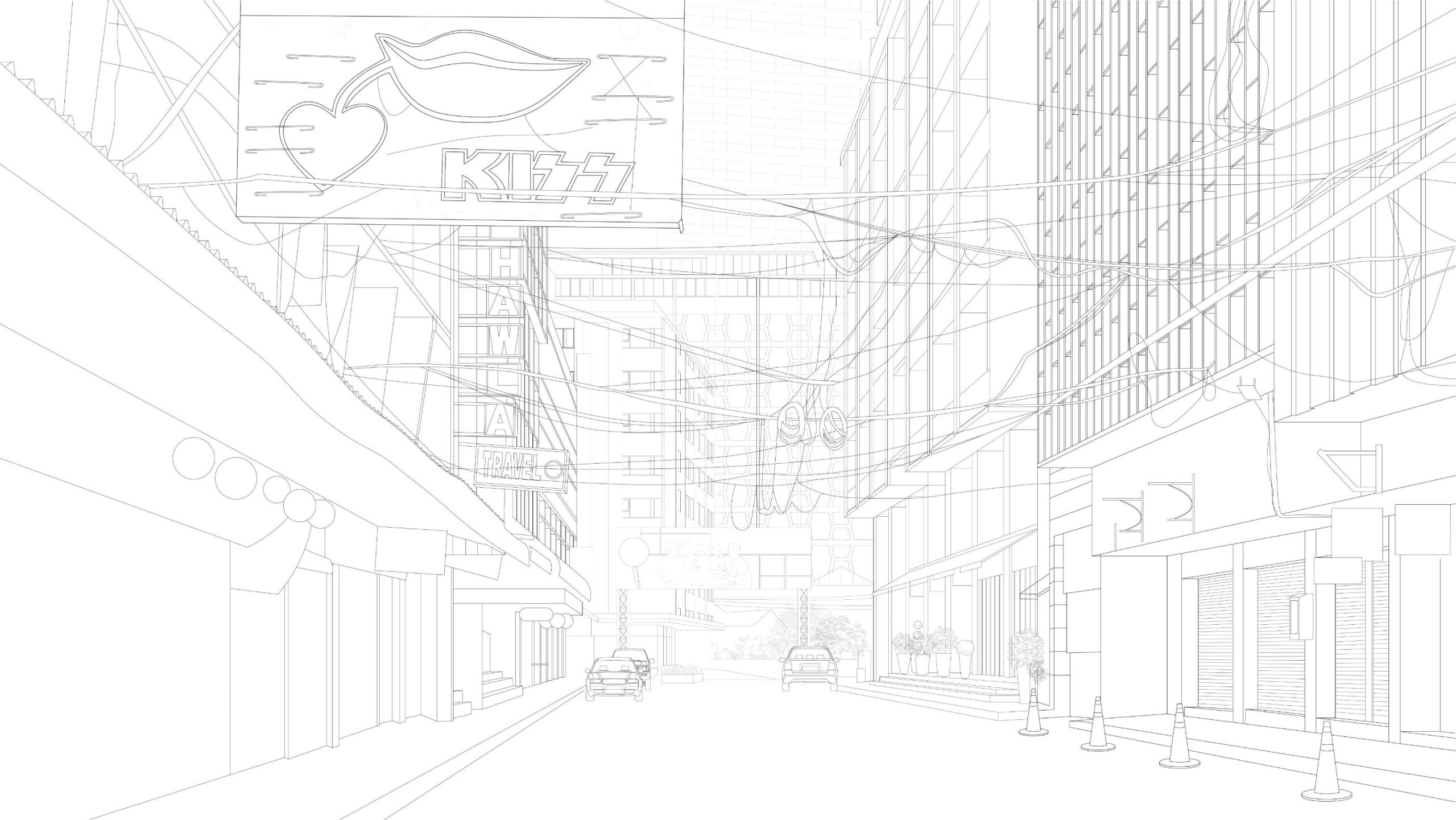 Covid-19 has proved to be anything but “a great leveller.” In Thailand, the pandemic has exposed the plight of one group of people who have been disproportionately affected by the virus: sex workers.

They were among the first to lose their source of income and they will likely be the last to be able to return to work. Over 85% of sex workers in Thailand work in the entertainment industry, employed in karaoke bars, spas, massage parlours, go-go bars and pubs. Many now live each day in a state of uncertainty, unclear as to how they will afford to put their next meal on the table, pay their children’s school fees or the rent. Covid-19 has made every day a matter of survival.

“Sex workers are afraid of the virus just like others are, but few rate Covid as their biggest worry,” says Thanta Laovilawanyakul, a former sex worker and now the coordinator at Empower Foundation. Founded in 1985 in Patpong, Empower works to amplify the voices of women sex workers across Thailand and advocate for their rights.

Prostitution is illegal here. Because there is no state recognition of sex work as work, there are no economic protections in place for when work becomes impossible. Accurate statistics on the number of sex workers in Thailand do not exist however Liz Hilton, a spokesperson and long-time activist with Empower says that the figure likely stands close to 300,000.

“Whether you are having sex for love, fun, money, Covid doesn’t care,” Liz says. “The question as to whether you can safely have sex in times of Corona is a question for all of society,” she continued, “but for sex-workers the question carries significantly more weight.”

Whilst the Royal Thai Government and public health experts have recommended that companies encourage their employees to work from home, remote working is simply not an option for the millions who earn their money in the informal sector. “How do you physically distance if your job is having sex with people?” Liz asks.

Thailand’s Prime Minister, the former military general, Prayut Chan-o-cha, who led a coup six years ago, issued a Covid-19-inspired Emergency Decree on 24th March. Lockdown, a night-time curfew and travel restrictions were imposed country-wide in an attempt to slow transmission and authorities warned that those in violation of the order could face up to two years in jail.

“We are in the same position as the other 10-million low-waged workers who have lost their income. We are in the same food queue, trying to make money stretch,” Thanta explained. The difference is, the Thai government does not recognise sex work as employment and turns a blind eye to sex workers’ existence, lending a certain irony to its “Leave No One Behind” development policy. 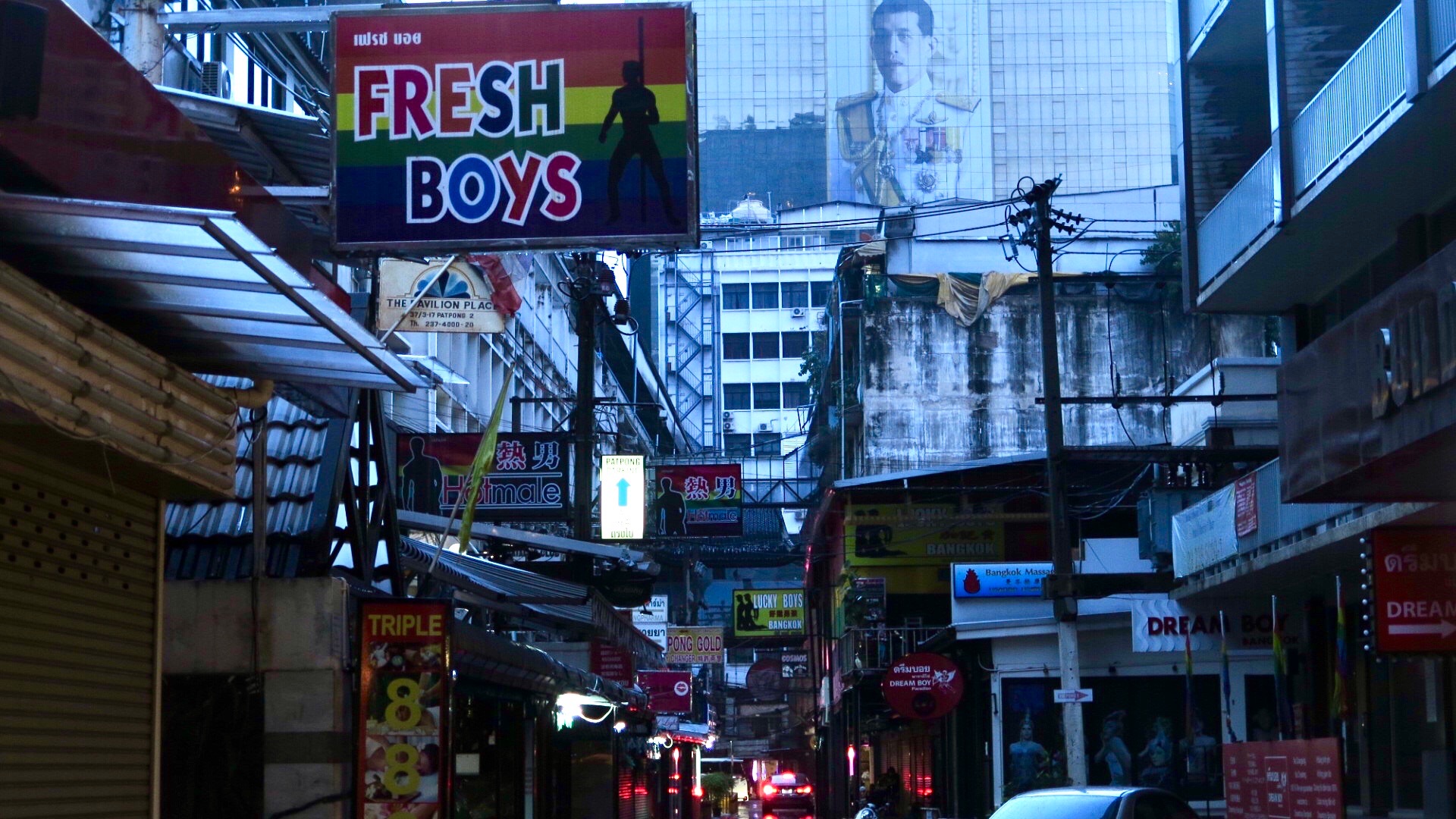 Sex workers’ rights were already severely restricted pre-pandemic. There is a long-standing history of state negligence as Thai politicians have largely adopted a look-the-other-way attitude, failing to implement measures to recognise and protect sex workers supposedly inalienable rights. They are consistently cast explicitly and implicitly as a source of social-ills and are denied protection, respect and recognition. The prevailing paradigm: sex work is not work.

Meanwhile, the Ministry of Public Health estimates that 75% of Thai males have bought sex. On top of that, in 2013, the Tourism Authority of Thailand recorded 26.74-million tourists, 11.23-million of whom were men to be visiting explicitly to buy sex. Empower states that the industry contributes somewhere between 5-10% of the Kingdom’s GDP, proving the industry’s integral contribution to the social and economic fabric of the country.

On average, each sex worker supports five to eight other people. Four out of five women who become sex workers in Thailand will have previously been married and often become the sole provider as there is no law that enforces fathers’ fiscal responsibility to their children. Some love what they do, sex work can be empowering and liberating, but sex work is also a lifeline and means of survival for many and particularly for minorities and marginalised groups.

“I’m a single mother with two daughters and I also help provide for my mother and two of my elderly aunties,” Thanta told me. “I began sex work originally as a temporary way to earn enough to feed my babies. Very few people in the world have careers, most of us have jobs that we do to earn money to pay the bills and feed the family. We don’t work because we enjoy it, we work because we have to. Compared to the other jobs I did, sex work gave me the most money and free time to do the work of raising my kids, time to study and time to organise. Both my daughters have completed university and my work made this possible.” She said,

“The problem is not ‘prostitution’: the problem is inequality, poverty and lack of support for young people.”

Thanta told me that sex workers aren’t asking for moral approval but acceptance and respect as human beings. “We have a Universal Declaration of Human Rights maybe because we could never agree on what would be a declaration of morality.” 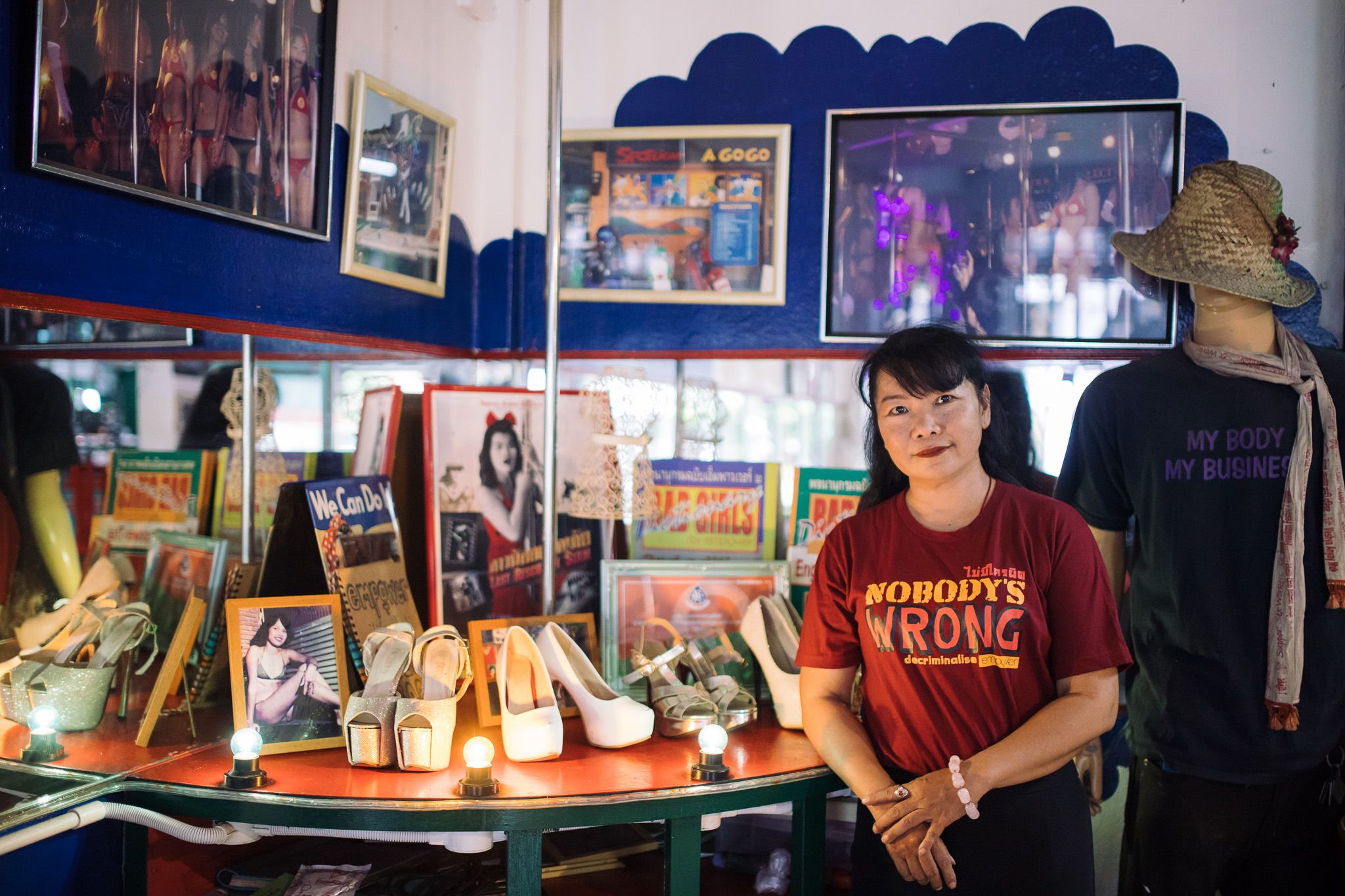 “There is the stigma of being a bad woman for doing this type of work and being open about having sex,” Thanta said. “This is something that all women need to push back against as a united force.”

The legal architectures that exist are failing to protect sex workers. The prohibition approach exacerbates the exposure to existing dangers that sex workers face and creates new threats. It is naïve to think that sex work will never exist. Human Rights Watch states that the “criminalisation of the sale or purchase of sex by consenting adults creates conditions in which violence and other abuse is tolerated.”

There is a big difference between decriminalisation and legalisation approaches. On paper, legalisation seems like a positive step, however the processes involved are expensive and difficult to comply with, meaning that a two-tiered system develops of both illegal and legal sex work. Research has also found that in countries where the legalisation of prostitution has taken place, rates of reported human trafficking have increased.

Decriminalisation on the other hand is the removal of punitive laws that target the sex industry. It means that sex work is treated the same as any other kind of legal work like sewing clothes, cutting hair or cooking noodles. New Zealand decriminalised sex work in 2003 and people are now allowed to work together for safety without being arrested for “brothel keeping.” Employers are now also held accountable and sex workers can refuse seeing a client.

Thanta listed just some of the positives that would result from decriminalisation of sex work. “We could form worker associations to improve working conditions; we could report crimes against us without fear; stigma would be reduced; we could access other employment, bank loans and government services; corruption and extortion would be reduced.”

For decades the Prostitution Act has been a tool for corrupt authorities to extort money and has allowed for immoral entrapment operations. Raids can entail sex workers being chased and trapped, sometimes semi-dressed, before being questioned and exposed in front of the media. Police officers manipulate sex workers and receive sexual services to gather evidence. In many countries around the world, condoms are used as supporting evidence of prostitution which has made it unsafe for sex workers to carry them, putting them at risk from sexually-transmitted diseases and pregnancy and exacerbating the stigma against them. Sex workers are also forced to pay bribes to avoid arrest and to pay the bribes, employers cut their earnings.

Towards the end of our conversation, Liz said, “Many foreigners have no idea that prostitution is criminalised in Thailand.” Whether they benefit from Thailand’s sex industry or not, visitors should demand human rights, labour rights, minority rights, women’s rights, LGBTQI+ rights and support progress towards a safer, fairer industry.

She added that Empower work closely with the English Collective of Prostitutes as part of an international movement for sex workers’ rights and highlighted that sex workers’ rights are also denied in the UK and emphasised the importance of people around the world holding their governments accountable.

The pandemic has distracted our attention from state abuses against human rights around the world and there are pressing and legitimate fears over the curtailment of our freedoms, as citizens are being asked to sacrifice their rights for the benefit of “the greater good.” But, maybe this period will also draw much needed attention and scrutiny to other long-standing human rights abuses and force governments to afford their citizens dignity.

A quotation I recently came across by the Indian novelist, Arundhati Roy came to mind when I came away from my conversation with Empower: “There’s really no such thing as the ‘voiceless’. There are only the deliberately silenced, or the preferably unheard.”

Find out more about the Empower Foundation HERE

Support the campaign for a Care Income Now! The World: Sex workers in Europe struggle to survive as clubs slowly reopen

The World: Sex workers in Europe struggle to survive as clubs slowly reopen

Support the campaign for a Care Income Now!