English Collective of Prostitutes Latest News, Media coverage What's a Nice Girl Like You Doing in a Job Like This?

A new study compares working conditions in sex work with other jobs disproportionately done by women. By Niki Adams and Tamsin Wressel 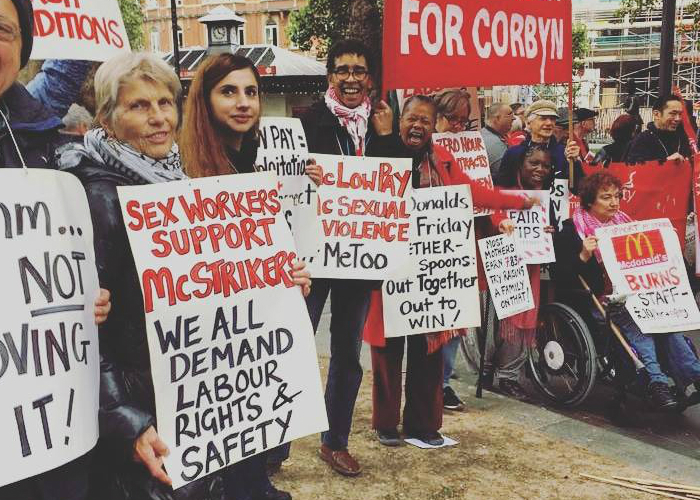 Sex work is often characterised as inherently exploitative, degrading and dangerous. But is that true? The English Collective of Prostitutes set out to investigate by comparing pay and conditions between sex work and other jobs disproportionately done by women like cleaning, midwifery, teaching and caring.

The research “What’s a nice girl like you doing in a job like this?” launched last week in Parliament at an event hosted by Dawn Butler MP and supported by Shadow Chancellor John McDonnell, shone a light on the frequently asked question: “why do women become sex workers?” Sixteen women and one non-binary person (who does her job in the capacity as a woman) were interviewed. The key findings were corroborated by much larger studies, recorded in the report.

Some results were not a surprise: sex workers earned more per hour than other women workers. This was clearly and explicitly stated by the brothel worker as the primary factor for entering the sex industry. “It’s the only possibility to earn more than the minimum wage in less time”. “With that higher hourly wage comes independence, relief, choice and fewer worries. The difference between other jobs I’ve worked at pubs or retail, where you get £7 per hour, and sex work is stark.”

Other results were shocking. Women in many of the other jobs described low pay, exploitative working conditions, being denied basic labour rights and facing discrimination and abuse with very little legal redress.

Just over a quarter of the women interviewed earned less than the minimum wage. Two thirds earned less than the living wage. Some were pushed to work longer hours than they wanted to — to the detriment of their mental wellbeing. Others weren’t given enough hours to provide them with an income to live on. Workplace injury was common and some described being traumatised by the stress of their work.

The illegality of sex work meant that sex workers were deprived of basic labour rights and had no legal redress, but in practice, neither did many of the other workers in the study. Zero hours contract workers were often forced to choose between working through serious illness or losing vital pay. They described that any rights or protections they got were at the whim of the employer or worse their direct manager which made them particularly vulnerable to exploitation and abuse.

Discrimination and sexual harassment were rife. The response from management to one woman’s complaint about a male colleague trying to touch her between her legs was “what a lad”. A childcare worker spoke about racism from the parents of the children she cared for and how this was sanctioned by her boss.

The struggle for survival described by many workers was made worse by austerity measures which have cut women off from other sources of money and resources. What was also surprising was that getting a salaried, public sector job was not a protection against exploitation. Teachers described how their actual hourly rate of pay was significantly reduced by unpaid overtime which was expected and done on such a regular and consistent basis that it became routine.

The midwife horrified many when she spoke at the launch of the research about how it was common for her to work 12-hour shifts.

“That many hours on your feet performing intense emotional and physical labour takes a toll. We’re often dehydrated, or we don’t have time to urinate or eat properly during a shift; we frequently suffer bladder and back problems.” She concluded: “All of us who perform emotional and physical caring labour, and I include sex workers in that, are unified in our work being seen as lacking skill and meaning, and thus we risk being exploited until equal recognition is given to the essential contribution that work traditionally performed by women makes to society.”

Just under half of the respondents were mothers who spoke about how their wages had dropped when they had children. Prohibitively high childcare costs and the lack consideration for their caring responsibilities in the workplace were also mentioned. It’s estimated that 90% of sex workers in the UK are women, the majority being mothers. This is understandable once we know that few other jobs pay enough to cover childcare costs or have the flexibility to allow mothers to take time off at short notice if their child was sick.

All of the migrant workers interviewed had immigration status in the UK, but the situation of illegal workers was addressed at the launch of the report by a woman from the All African Women’s Group. She described the abuse she faced when forced to work illegally as a child carer and reminded the audience that extreme exploitation is in some cases perfectly legal with the private company Serco paying women in detention centres like Yarl’s Wood, just £1 an hour.

The similarities between sex work and other women’s work were many. The biggest difference was that sex work was the only job on the list which is criminalised. Although it’s legal to exchange sex for money, soliciting on the street is illegal and working together in premises puts women at risk of prosecution for brothel keeping.

The street sex worker was the only woman to report physical violence from a client but felt she couldn’t rely on the police for protection. The constant threat of arrest made the police at times the principal harassers. “There’s a big chance of violence mainly from the customers which is made worse by the fact we haven’t got enough time or enough safe places to work in when we’re trying to avoid the police. They just put us in more danger.”

The criminalisation of sex work also cuts women off from the ways other workers have found to organise to improve their working conditions. As Niki Adams, one of the authors of the report, commented:

“Even basic protections such as the ability to work with others are denied to sex workers, let alone the right to join a trade union and organise collectively, go on strike and protest against our work when it is exploitative and abusive.”

The research is timely as a government commissioned study into the nature and extent of the sex industry in the UK is about to be published. It arose from the 2016 Home Affairs Committee Inquiry which recommended that sex workers on the street and working together in premises be decriminalised. Exploitation within the sex industry was a particular concern.

This research by exposing the exploitation and abuse common in other jobs held by women, strengthens the demand for sex work to be assessed by the same standard as other work, but with the increased safety afforded by decriminalisation.

As shadow Chancellor John McDonnell said in welcoming the research:

“It highlights the urgent need for a living wage across the board, so no one is driven into prostitution by poverty, and for decriminalisation so sex workers also have rights as workers.”