Laws which target sex workers are supposedly set up to protect women. But really, they put vulnerable women in more danger.

By Stella Winter and Liliana Gashi from English Collective of Prostitutes 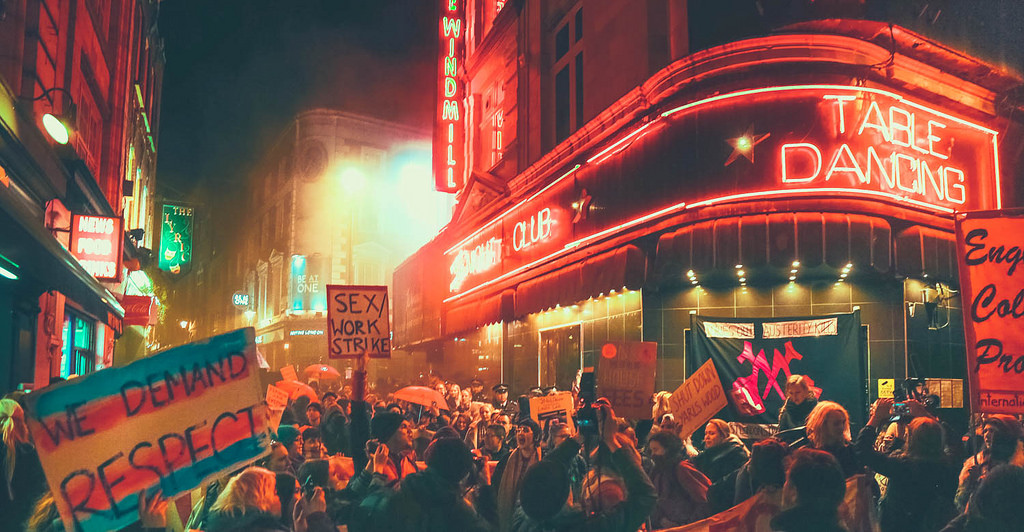 A rally for sex worker rights during the Women’s Strike, 8th March 2018. Photo by Juno Mac.

After the introduction of SESTA-FOSTA in the US set the precedent for policing online sex work, Sarah Champion MP led a Parliamentary debate on ‘Tackling the Demand for Commercial Sexual Exploitation’ calling for online sites where sex workers advertise to be shut down and for buying sex to be criminalised.

Sex workers’ warnings that these two measures would undermine safety have been dismissed. Advertising provides greater control in screening potential clients and negotiating services, rates and condom use. If we can’t advertise online and work independently many of us will be forced to work in other ways, including on the streets which is 10 times more dangerous than working indoors. A 2014, study found that 77% of violent incidents were experienced by street-based sex workers, 11% by inside solo sex workers and 6% by sex workers in brothels, parlours or saunas. Those of us who continue to work indoors will be pushed into the hands of exploitative brothel bosses who will know we have little alternative but to accept whatever conditions of work they impose on us.

Laws criminalising clients have been introduced in a number of countries. Sweden is held up as the poster child for such laws yet evidence there shows that since the law change, sex workers face increased stigma, are more at risk of violence, and are less able to call on the protection of the police and the authorities.

After Ireland’s sex purchase law was introduced, reported incidences of violent crime against sex workers rose by almost 50%. In France, a two-year evaluation of the law found 42% of sex workers were more exposed to violence and 38% have found it increasingly hard to insist on condom use. In Norway, sex workers have faced evictions, prosecutions and increased stigma – with migrant workers particularly targeted.

None of this evidence was raised at the debate last week. Instead Champion alleged that prostitution (which she calls commercial sexual exploitation) is inherently violent: “Offering someone money, goods or services for sex is sexual coercion. It is a form of violence against women.” Like many before her, she used the spectre of trafficking to justify calling for a police crackdown. Gavin Shuker MP, the chair of the All Party Parliamentary Group on Prostitution, repeated his oft quoted claim that “the single driver of trafficking into this country is commercial sexual exploitation”

Champion is wrong when she says that the trafficking of women into the sex industry is happening on an “industrial scale”. A 2011 ESRC study of migrant sex workers found less than 6% had been trafficked, many said they prefer working in the sex industry rather than the “unrewarding and sometimes exploitative conditions they meet in non-sexual jobs”.

This is also reflected in our own experience organising for sex worker rights and safety. At the time when the police were repeating claims that “every single foreign woman in the ‘walk-up’ flats in Soho had been smuggled into the country and forced to work as a prostitute” we were holding meetings in the basement of a café, of over 60 women who worked in the area, to organise against raids and deportations. Women spoke out in Parliament, met the local vicar, and gave interviews to the press about how “being foreign doesn’t mean we are forced”.

As for Champion’s unsubstantiated claim that “sexual exploitation of women and girls by organised crime groups is widespread across the UK” We’ve heard that story before. As far back as 2002, Soho sex workers said that “All this talk of Balkan gangs running the Soho girls is rubbish. We are freelances, working for ourselves. Apart from what I need to live on, I send all my money back home.”

Through all the misinformation and sensationalist reporting about trafficking one stark truth emerges, despite millions of pounds of funding, victims of trafficking get little or no help from the authorities.

Some of the women in the English Collective of Prostitutes’ network would fit the description of a trafficked victim – that is someone who is brought to the UK, held against their will and threatened or coerced to provide sexual services for somebody else’s profit.  In every case the women weren’t “saved” by others, they escaped through their own ingenuity, courage and organising skills.

Two sisters who came to London from rural Moldova, where the family had “no running water, or gas for heating”, were promised work in a restaurant. They told us how “after a week the men said we must earn our keep by sleeping with other men. They beat us and said we would never see each other again if we tried to leave.” They escaped by recruiting help from the receptionist in the flat where they worked, who squirrelled away some money. They both faked illness on the same day and ran. They refused to go to the police because they didn’t want to be sent back. We came to us instead and we found them emergency housing for a few days. Eventually one sister got a job as a stripper so they could afford a market rent.

We have at least 10 examples like that: the woman who cultivated a relationship with a bigger gangster than the one holding her, who supported her to get her passport back. The young woman who jumped out of a car at the petrol station and was sitting on our women’s centre doorstep when we arrived in the morning. We helped her claim asylum and she was detained for travelling on false documents. It was our campaigning with Black Women’s Rape Action Project that got her out.

Trafficking isn’t enabled by online adverts, it is enabled by poverty and women’s determination to escape it. And it is enabled by the hostile immigration environment that make it impossible for women to cross international borders unaided.

Once in the UK, sex work can be the best or only option to prevent destitution. Should the successive British and other governments which wage wars shattering and impoverishing countries and forcing people to flee, be put on trial for enabling trafficking? Should a government that created the hostile environment for immigrants (so graphically exposed by the Windrush scandal), which denies people access to housing, health care, a bank account and benefits, be put on trial for enabling exploitation? Should a government which introduces austerity policies 86% of which fall on women be prosecuted for sexism? We think yes.

Traffickers escape prosecution not because of a lack of applicable laws, but as with domestic violence and rape, because protecting women is not the priority. Women Against Rape points to the appalling 6% and 5% conviction rates for reported rape and domestic violence. More often than not when sex workers report violence, the police refuse to act and may even threaten to prosecute them instead for prostitution offences.

An effective anti-trafficking strategy has to strengthen women’s hands. Decriminalising sex work would enable  women who work in the sex industry to insist on the same labour rights as other workers and report violence without fear of arrest. Ending the hostile immigration environment and ensuring that women have access to money and resources so that they can feed themselves and their families would make them less vulnerable to those ready to exploit them.

But for women MPs looking to raise their profile as gender equality campaigners, none of these proposals are as attractive as cracking down on men who buy sex. It is much more fashionable to increase police powers and tighten immigration controls – activities much loved by all proponents of a repressive state.

Back in 2002 when Soho sex workers protested against being characterised as victims, only a few principled parliamentarians listened. But this time, judging from the hundred strong protest outside parliament last week, sex workers are determined to make our voices heard. Those who claim concern for our welfare should listen to us before they speak for us.

Buzzfeed: The Rise and Rise of the UK’s Student Sugar Babies Morning Star: Sex workers across the world are demanding decriminalisation