Carried from the Bank of England to London’s Piccadilly Circus by drizzle, pop music and smoke grenades, 2019’s Women’s Strike march culminated in a performance by strippers demanding the full decriminalisation of sex work. Thousands of people danced with them, marking the end of an International Women’s Day (IWD) event that had sex workers at the helm.

The Women’s Strike is a movement to reclaim IWD from the clutches of a liberal feminism that sees no irony in celebrating the date – which began with a strike by migrant women garment workers – with slogan t-shirts made by poor women in the Global South. It seeks to defy ‘radical’ feminists who boundary womanhood, excluding trans women and sex workers. This year up to 6,000 people are thought to have taken part.

“The Strike is revolutionary by nature,” Shiri Shalmy, a Women’s Strike and United Voices of the World organiser, told Novara Media. “It is not about making things a little bit better for white feminists. We’re not interested in getting more women into boardrooms, because the boardrooms should not be there.”

The Women’s Strike encourages women to refuse “all the work [they do]… whether paid work in offices and factories, or unpaid domestic work in homes, communities and bedrooms”. It is a protest against the violence of patriarchy and opposes – among other things – poverty, sexual assault, the criminalisation of sex work, the detention and deportation of migrant women, and poor access to healthcare for trans women. It calls for solidarity in the fight for a feminist, anti-capitalist future. 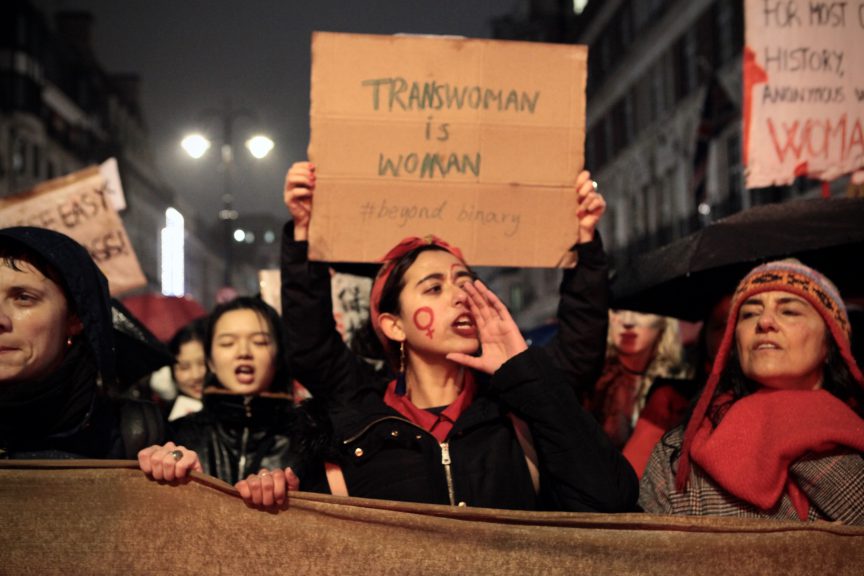 Given this, it’s easy to see why sex work was a key battleground for the strikers. Sex work is a feminised industry, in which working class mothers, women of colour, migrant women, disabled women, and trans women are vastly over-represented. Selling sex in the UK is legal, but the activities related to it – including working inside with another woman, and soliciting – are criminalised, which can make sex work precarious and unsafe. “In no other job are you so vulnerable to state oppression,” said Rosa Thomas, an organiser with campaign group Decrim Now. “The people at the bottom of society should be the ones we’re fighting for first.”

Fighting for sex workers is also fighting for all women, argued organiser Camille Barbagallo. “The degrading of whores is what keeps all women down,” she said. With sex workers at the helm, the Women’s Strike rejected a system that divides women into a moralistic hierarchy and polices their bodies. By protesting sex work stigma, strikers made a stand against the shaming of all women.

The Women’s Strike also decried the hypocrisy of placing blame on women sex workers, that instead belongs with systemic oppression – not least by feminists who see sex work as collusion with the patriarchy, rather than a way to survive within it.

Society’s discomfort with sex work belies the fact that sex is often a transaction in other contexts, too, especially for women, said Shalmy. “Saying, ‘oh it’s just those bad women, those fallen women, who survive through sex’ is a joke,” she explained. “Married women, historically and still, pay their rent through sex.”

Fighting for sex work to be recognised as work also underlines the struggle to honour all women’s work. “There are so many other forms of labour that women perform that are not considered work,” said Shalmy – including giving birth, raising children, cleaning homes, and providing emotional support.

Centring the experience of sex workers in the strike sheds light on other feminised sectors, said Niki Adams, of the English Collective of Prostitutes (ECP). Adams believes many people with a ‘distaste’ for sex work feel this way because they have been socialised to believe sex is sacred and exceptionally intimate – when this does not reflect the reality of most women. To illustrate this, Adams used the story of a woman in ECP who worked as a sex worker and a care worker for the same man. “She said there was more personal intimacy in the care work than in the sex work,” Adams said – but she was paid much more for the latter. A recent report by the ECP showed that sex work is not – as detractors argue – uniquely exploitative when compared to other work usually done by women. 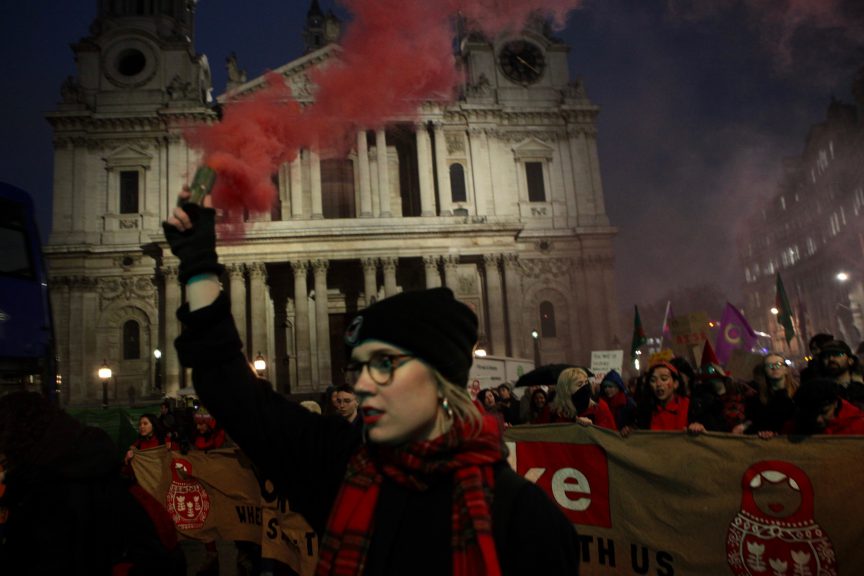 It’s not surprising that sex work is seen by so many as a threat. Sex workers demand payment for services that under patriarchy women are expected to perform freely and with a smile – in doing so they highlight and challenge the existing, capitalist order. Amy, a stripper who went on strike, says she is often “so bored by customers,” and feels “grateful I am being paid for once, for listening to and acting interested in men”.

According to Thomas from Decrim Now, many middle-class women don’t see the need to support sex workers because they cannot see past their own privilege. “They find it unsavoury, and that’s just a result of being in an elevated position in society,” she said. In contrast, “When we were in Liverpool, we had so many working class nanas coming up to us and saying ‘good on ya girls!’”

While working class women have always been more likely to do sex work, austerity has seen more women enter the industry. In a landscape of low-paid, insecure and demoralising work, and benefit cuts that disproportionately affect women – some more than others – “Sex work very quickly becomes the best choice,” said Adams.

“For a lot of workers, the sex industry is a safety net – perhaps they have difficulty accessing state benefits because of their migrant status,” said Thomas, “or maybe they’re disabled”.

Adams shared the story of a single mother of two children, including one disabled child, who called the ECP, terrified, because her income was going to drop by a third when she was switched to universal credit. She wanted to increase her income through sex work, but was worried about breaking the law and having her children taken away.

Adams said she was “infuriated” by abolitionists. “I think, ‘In what world is your campaigning a solution to this woman’s situation?’” 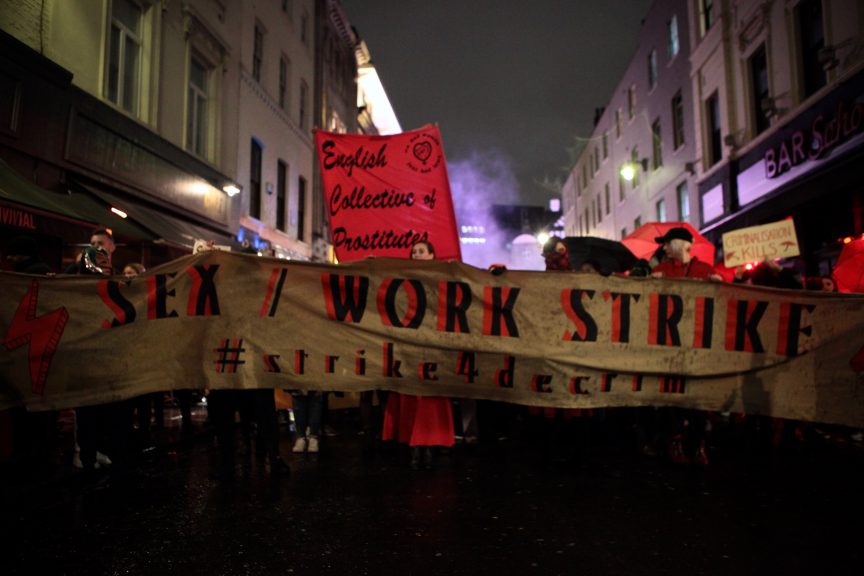 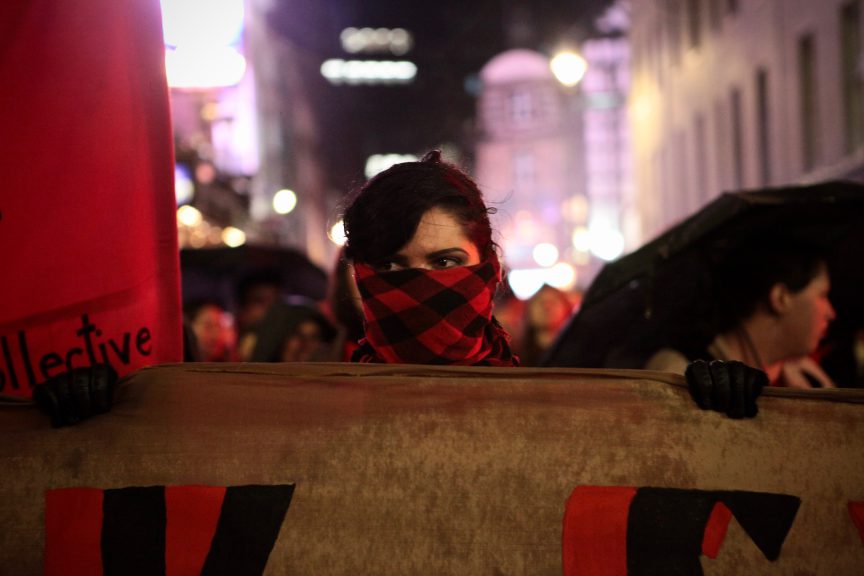 Criminalisation means that the police frequently raid brothels, which carries an increased risk for migrant sex workers. Striker Agnesa told Novara Media she sends money to Albania to support her family. “I work hard but I’m told I should be ashamed,” she said. “I am not unhappy at work, but I am worried… At any point the police could come in, and me or my friends could get arrested.”

Agnesa said that if her or her colleagues were attacked or robbed at work they wouldn’t be able to call the police. “I know they would probably treat me badly because that’s what they’ve done to all the other girls from Albania, Romania, Brazil, everywhere,” she said.

Due to Brexit and deportations, tensions are running high in the brothel, Agnesa added, with workers desperately organising to stay in the UK.

“We’ve done well in stopping some of the raids, arrests and deportations,” said Adams. “[Migrant women] were getting absolutely persecuted on the street; the police were confiscating their ID and saying, ‘If you don’t produce a ticket back home we’re not giving it back’.”

Aside from the risk of arrest and deportation, migrant sex workers have to contend with the ‘rescue industry’. Whilst all sex workers face abolitionists who insist their job is either trauma-induced or trauma-inducing, migrant women are also up against ‘anti-trafficking’ discourse. Of the feminists who look to ‘rescue’ her, Agnesa said:

“I’m furious about them. They’re no better than the police, and just assume that all us foreign girls are trafficked. They know nothing about our lives…

“No matter what we say, we are not believed.” 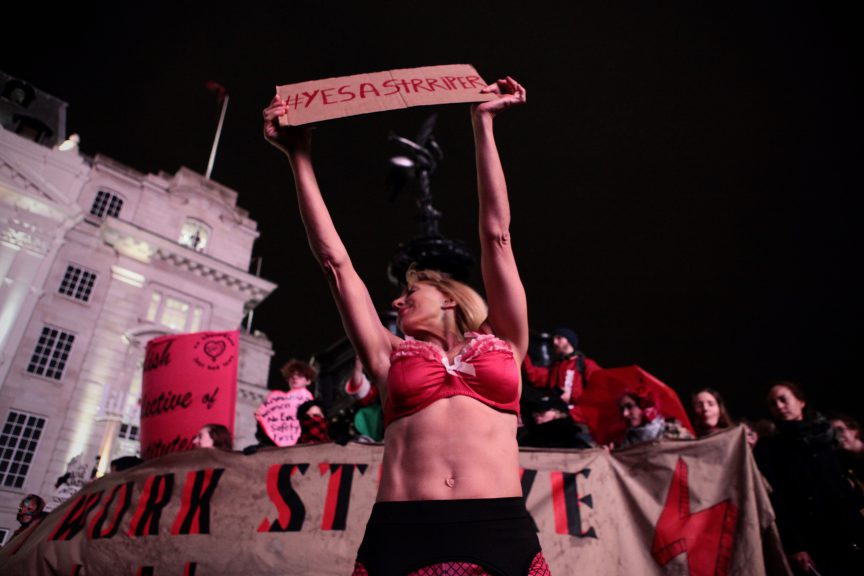 In having sex workers and their demands front and centre, the Women’s Strike flew in the face of both liberal and ‘radical’ feminists who invisibilise women that don’t fit their vision.

At the heart of a feminism for the 99%, the push for sex worker rights is a workers’ rights movement in which women who experience intersecting oppression, and who are marginalised by mainstream feminism, are fighting and winning. The UK struggle is growing in strength by the day. As well as the Decrim Now campaign, the ECP is petitioning the Government for decriminalisation, and strippers are unionising.

As she marched on Soho, to speakers blasting Cardi B, a sex worker called Azalea had a clear message:

“None of my friends who are in this industry want to be rescued: we want to be taken seriously and listened to. I am a feminist – feminism includes all women, women that are affected by all kinds of oppression, across the world. It’s not just me, it’s everyone.”