The Brazilian woman, who was in the UK on a six-month visa, approached the police after she was robbed at knifepoint along with other sex workers by a group of men on Baker Street in Enfield in the early hours of 24 June Google Maps

Authorities have been accused of failing to protect sex workers after a victim of a violent robbery was threatened with prosecution and deportation when she reported the crime to the police.

The Brazilian woman, who was in the UK on a six-month visitor visa and had engaged in sex work to save money for her trip home, was robbed at knifepoint by five men in Enfield in the early hours of 24 June.

She called the police following the attack, but when they arrived on the premises she said their focus appeared to be on her activities as a sex worker as opposed to the robbery.

Officers reportedly failed to ask her or any of the other women on the premises for a statement, and did not contact the victims in the weeks after the attack.

Twelve days later, police delivered a letter to the women threatening them with arrest and prosecution if the premises continues to be used as a brothel.

A section of the letter seen by The Independent read: “Information suggested that the premises were being operated as a brothel […] Police will conduct a further visit to these premises in the near future.

“If these premises continue to be used in this capacity, persons acting in contravention of the above legislation will be liable to arrest and maybe prosecuted.”

Five weeks after the robbery, the Brazilian woman was detained at Gatwick airport for several hours after returning from a trip to Spain. She was handed a letter by the Home Office demanding that she leave the UK on the basis that she had stated in June that she was employed in sex work.

The letter stated: “You have sought to enter as a visitor for one month. However, you have stated you have worked as a sex worker in the UK in June this year.”

It went on to state that this indicated she was not a “genuine visitor to the UK” and that she must therefore leave within four days. 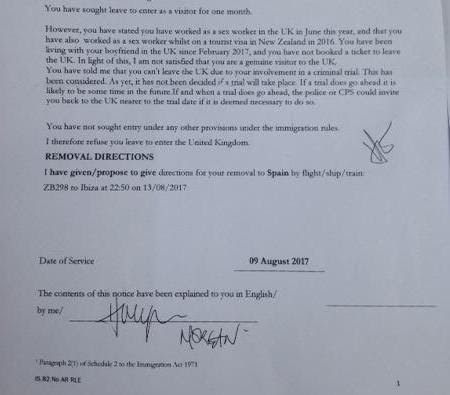 The letter received by the Brazilian woman from the Home Office, before the removal notice was later postponed

Following media reports, the deportation notice was removed and the woman was told she could remain until the end of August — when she had planned to return to Brazil with her boyfriend anyway — in order to be present during the criminal trial for the robbery.

Campaigners said the threat of prosecution and deportation by authorities against sex workers who report serious crimes risk making women more reluctant to contact the police.

Shadow Brexit secretary Keir Starmer, who is the Brazilian woman’s local MP, wrote to the Met police stating that letters sent by the force threatening women with prosecution under the 1956 Sexual Offences Act “could make it more difficult to stay in touch with victims of violent crimes and therefore hinder a future prosecution”.

Niki Adams, a spokeswoman for the English Collective of Prostitutes who has been supporting the Brazilian woman following the ordeal, told The Independent: “We’re already in a position where sex workers are reluctant to report violence to the police for fear of prosecution and — if they’re migrant sex workers — deportation.

“What has happened here has very wide implications. If the police are so dismissive of safety in this situation and they’re ready to put prostitution offences – where there’s no force or coercion or exploitation – over stopping a gang of violent criminals, it raises questions about their priorities.”

She said police had failed to treat the woman and the other sex workers in the Enfield premises when it was robbed as victims, instead focusing on their involvement in sex work.

“She is still traumatised by what happened. She’s been having flashbacks. She said none of the other girls wanted to report it to the police, but as soon as the men left she did. She told them on the phone that she was a sex worker,” she said.

“She said that when officers first arrived they started to do forensic tests, but they quickly started asking her and the other girls how many clients they had and what kind of money they earned, which is completely inappropriate for a victim of such a horrible crime in the immediate aftermath.

“They didn’t do what you would expect for a usual victim. They clearly weren’t seen as victims from the start.”

Ms Adams said has since heard reports from other sex workers who had been attacked in a similar way across London, among whom only one other woman had reported it to the police.

Highlighting sex workers’ fears about seeking protection from police, she said: “One of the women in the Enfield attack told us that during the robbery she managed to escape to a bedroom, and saw a bobby on the beat on the street outside through the window.

“She said she thought to herself ‘Should I call him for help or keep my mouth shut?’ and she kept her mouth shut. She was afraid of revealing the premises. The gangs attacking brothels know this fear exists, which is why they keep targeting them.”

Following the robbery, the English Collective of Prostitutes wrote to the Met complaining that the response had been to threaten the women with prosecution. Ms Adams said the organisation initially got no response, but following political pressure the police responded by justifying their actions.

The letter from Edmonton Police stated: “Officers cannot ignore information that they are told in the course of an investigation that may highlight other offences or vulnerabilities.”

It continued: “The Metropolitan Police takes the individual needs of those working within the sex trade very seriously and works closely with partner agencies and charities to offer support and assistance to those involved.”

Ms Adams said of their response: “It was a complete PR exercise. I’m tired of hearing their claims that they take sex workers’ safety seriously.

“If these attackers are allowed to act with impunity, then the violence is bound to escalate. Women’s safety is not being prioritised – police policy are actively undermining women’s attempts to keep themselves safe and report crimes committed against them.”

A spokesperson for the Met Police said the force was “investigating reports” of the robbery and that no arrests had been made at this stage, but that enquiries were continuing, adding: “Officers subsequently made contact with the victim/s to inform them on the progress of the investigation.”

On the accusations of a lack of victim support for sex workers, the force said: “As a law enforcement agency, the safety of people engaged in sex work is paramount to the police and tackling violence against women and girls is also a priority for the Met Police.

“We are continuing to develop a consistent approach across London to dealing with the impact of sex work on the vulnerable, and working in partnership with support agencies to offer individuals pathways into support services and out of prostitution.

“This of course does not rule out use of legislation where other options have been exhausted, or it is the appropriate action to take in the circumstances.

“We can confirm that a letter was given to the occupant/s [of the Enfield premises above] that detailed the Section 33A Sexual Offences Act 1956 – this states that ‘It is an offence for a person to keep, or to manage, or to act or assist in the management of, a brothel to which people resort for practices involving prostitution (whether or not also for other practices).”

The Home Office has been contacted for comment regarding the deportation notice.