Huffington Post: Every Person Has The Right To Work In Safety – So Why Doesn’t The Law Protect Sex Workers?

This isn’t about whether sex work is uniquely degrading or empowering – it’s about the reality of 70,000 women who today will exchange sex for money and who are not being protected by the law

Niki Adams Spokeswoman for the English Collective of Prostitutes 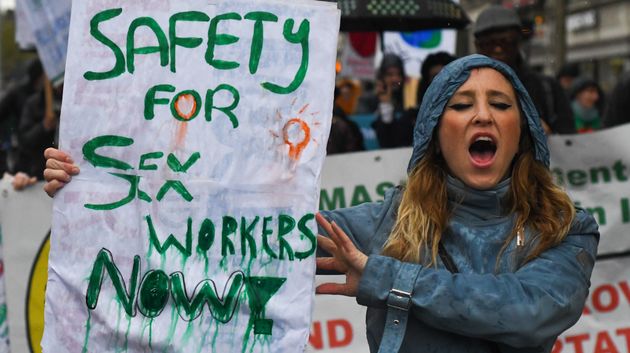 Sheila started selling sex to pay off debts and support her son after she was forced to give up other work because of her disabilities. She worked alone.

“Within months, I was attacked, raped repeatedly, tied up, held hostage, and nearly strangled. I gave evidence against my attacker but he got off. I suffered years of nightmares and panic attacks and decided never to work alone again,” she told me.

She started working with friends because it was safer. She described how they organised themselves collectively: “We kept our own money but jointly paid towards the rent, bills and advertising.”

A few months in, the flat where she was working was raided and she was arrested and charged with brothel-keeping. Charges were eventually dropped after a campaign spearheaded by the ECP which led to over a thousand people writing to their MP to protest. But Ms Farmer should never have been charged. She fell foul of the law that makes it illegal for two or more prostitutes to work together. To be within the law sex workers must work alone.

Maria Santos worked with five other women in a flat in East London. Five men with knives broke in one night and robbed them. She called the police but they did nothing about this violent gang and instead a few days later sent her a letter threatening her with prosecution for brothel-keeping. Again, it took a campaign to stop the prosecution and her being deported.

Even though it’s legal to be a sex worker in the UK, it’s illegal to work together, forcing women to work alone and risk their safety everyday. On the street women are running from the police and are prevented from using even the most basic security measures such as: working with others who could record licence plates; avoiding isolated areas; sharing information about aggressive men; taking time to screen clients by, for example, ensuring that there are no hidden passengers, or settling the terms of the transaction before getting into a car.

Over 180 sex workers have been killed since 1990 and two thirds have suffered physical attack. These figures are probably an underestimate, since the criminalisation and stigma associated with prostitution prevent women being public about their job. This should constitute a national crisis. Yet it doesn’t. Worse still, the law of the land exacerbates the risks sex workers face by forcing women to work in isolation and preventing them from reporting violence and getting protection for fear that we will be arrested ourselves.

This epidemic of violence against sex workers makes our new campaign #makeallwomensafe more needed than ever.

Most sex workers are mothers working to support families. Those who oppose austerity cuts – 86% of which have targeted women– from grassroots women to the UN Rapporteur, have reported that more women, particularly mothers, are being pushed into prostitution by poverty.

Amnesty International, which voted to support the decriminalisation of sex work, saw the urgency of addressing poverty and called on governments to provide a social safety net.

Attempts to discredit Amnesty came from critics falsely claiming that it was promoting pimping. But pimping is extortion and violence, and there are laws against that. Claims that the majority of sex workers are trafficked are untrue and, in any case, the law against trafficking would remain in place to deal with those that are trafficked.

Criminalising clients is put forward as a way to clamp down on prostitution. Yet a report by the Home Affairs Committee was clear that the current laws surrounding sex buying are based on the assumption that prostitution is morally wrong, when law has no purpose in making moral judgements.

Decriminalisation has been introduced in New Zealand with verifiable success. Over 90% of sex workers said they had legal, health and safety rights; 64.8% found it easier to refuse clients – a key marker of exploitation ― and 70% were more likely to report incidents of violence to the police.

Our campaign is not asking what people think of sex work. We don’t want to discuss whether sex work is uniquely degrading or empowering, or whether it is work or victimisation – apply the same question to call centre workers and you’ll realise how absurd it is. We want to discuss the reality of over 70,000 women who will today or tomorrow or sometime this week exchange sex for money. The laws are forcing us to do this in ways that are dangerous – they must be abolished.

Please sign our petition to demand that the government act urgently before more women lose their lives. It is a first step to changing the world, to ensuring we are no longer criminalised. We are all entitled to safety and protection, and to a living wage including for mothers, so no-one is forced by poverty into sex with anyone.

Niki Adams is spokeswoman for the English Collective of Prostitutes, a network of women working in different areas of the sex industry – both on the streets and indoors, which campaigns for decriminalisation of sex work and for sex workers’ safety