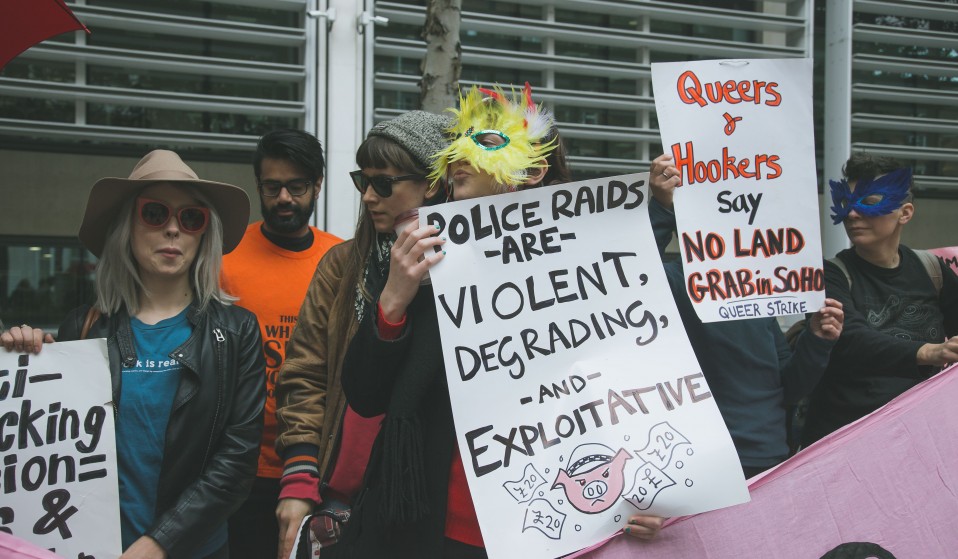 Women from the English Collective of Prostitutes and the Sex Workers Open University protest police attitudes to migrants sex workers. Sex workers don’t need a hero, they say, but to be treated like humans.
Prostitution is a tricky subject. Most of us don’t talk about it, and if we do, it’s usually not in a positive light. But on Monday afternoon, a group of sex workers planted themselves outside the dull grey exterior of the Home Office in central London, determined to hold Home Secretary Amber Rudd, and her abysmal attitude towards immigration, to account.Organised as a direct response to raids in Chinatown and Soho in central London on Thursday night, the city’s most renowned areas for sex workers to operate in, this protest was an urgent call for action. Last week police ransacked a number of massage parlours, under the guise of an operation to find victims of human trafficking, although those gathered outside the building don’t accept that this was the true motivation. 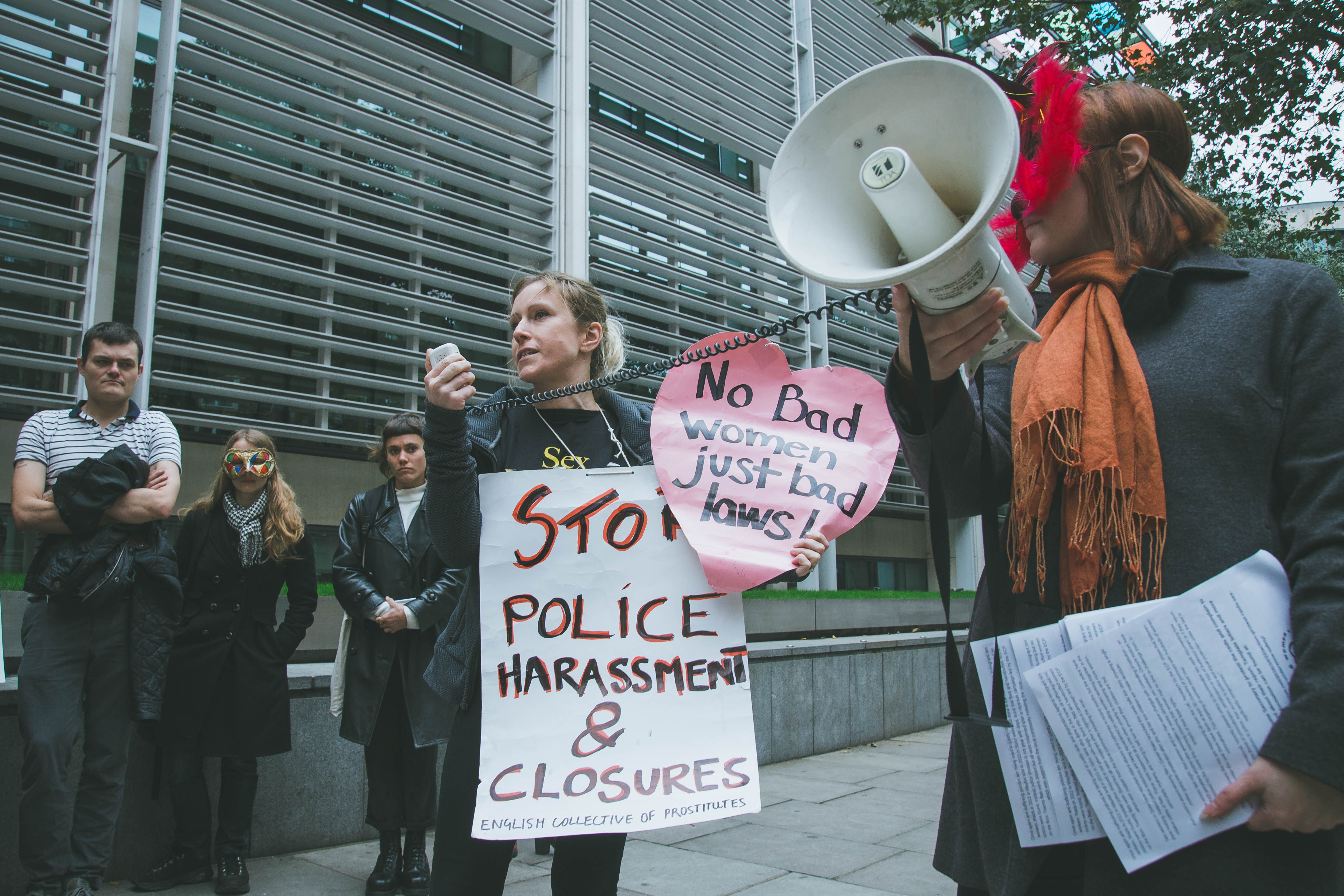 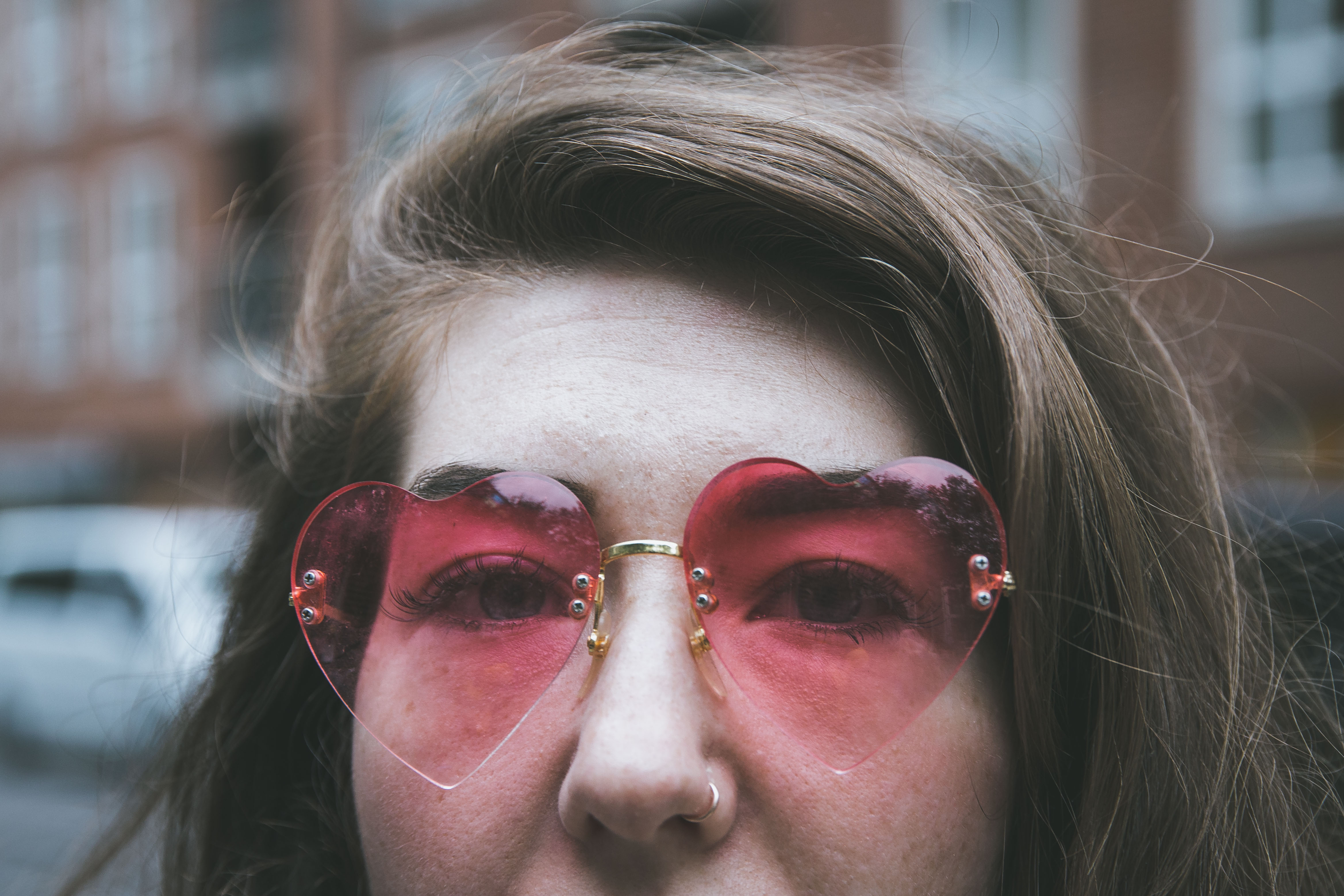 “Police swooped in, looking for undocumented migrants to deport,” Toni Mac tells me, as I manage to grab her for an interview. A sex worker and activist, I recognise her from a TEDx talk where she spoke about the need for decriminalisation. Today, donning a pair of heart shaped sunglasses, her tune is more focused on the needs of the women at risk. “They called it an operation to look for victims of human trafficking, which we think is a figleaf for their agenda. It’s about deporting people, and we’re not happy about it.”

These raids come at a pinnacle point of anti-immigrant sentiment. With the impact of Brexit still unclear, and the news bringing us other stories of inhumane deportation such as what happened at a Byron Burger, the country doesn’t feel very safe for those without a British passport. When it comes to the sex industry, the police are all too happy to use the language of human trafficking and act like the harassment of sex workers is all in the interest of their own safety. 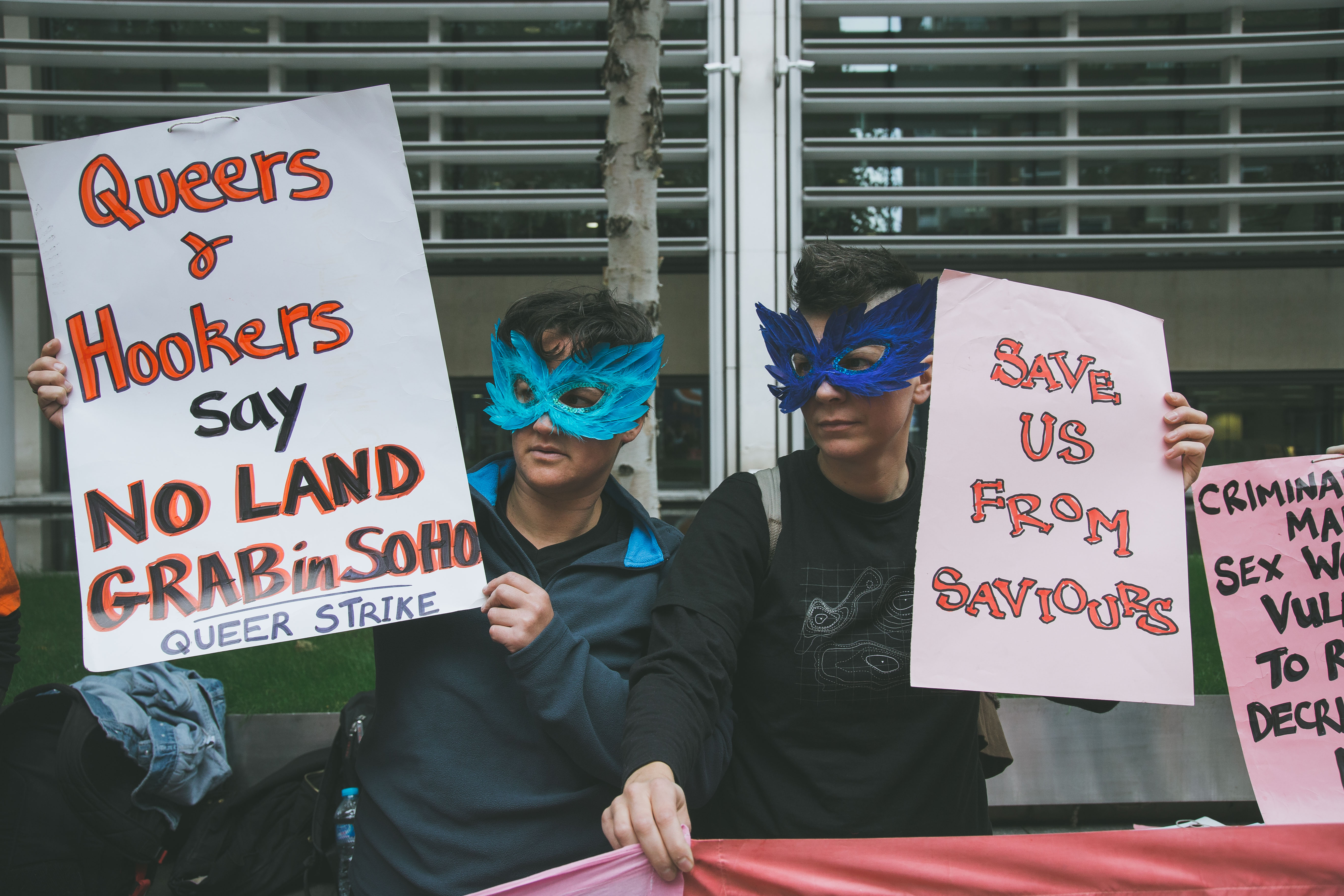 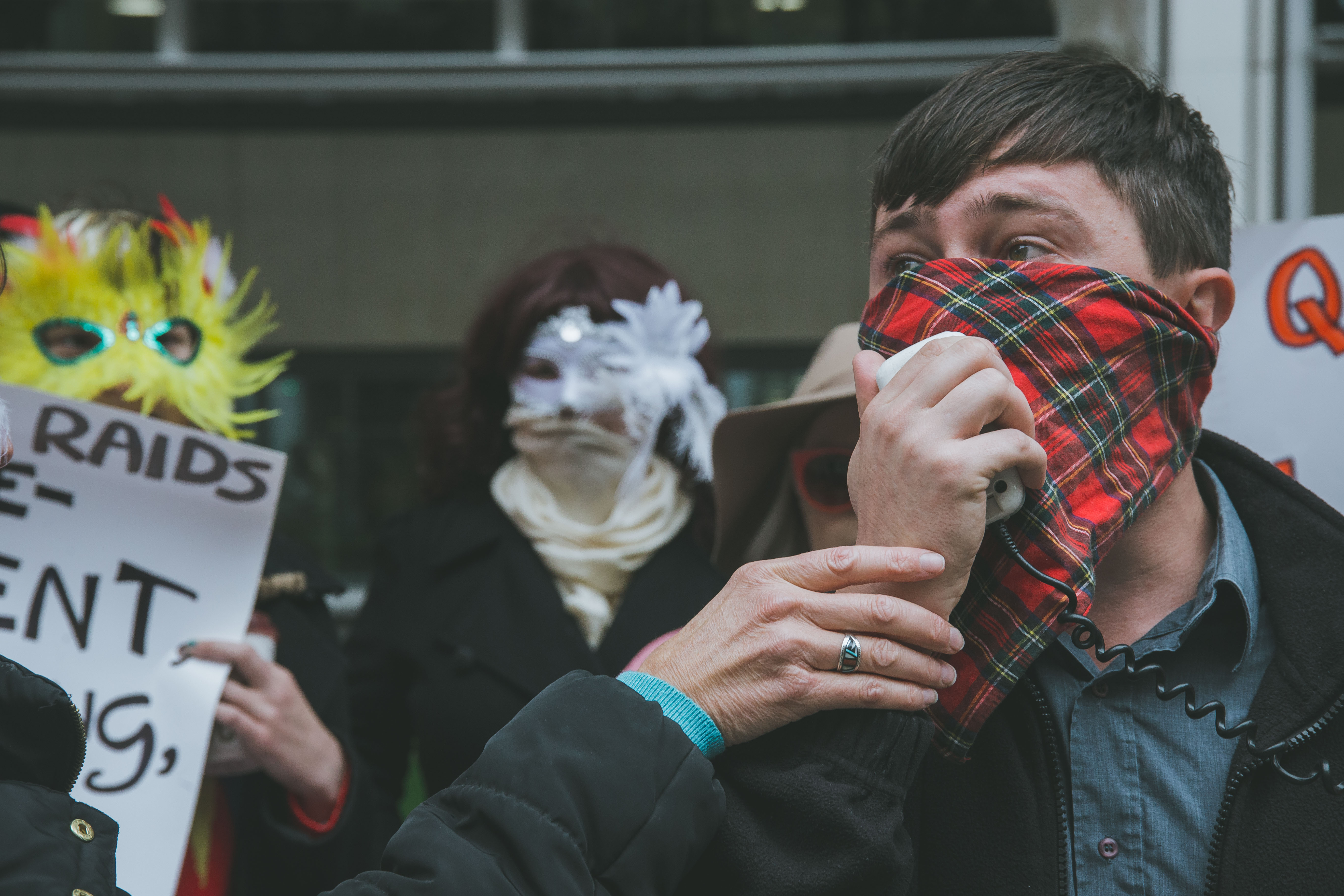 “The last notable raids that happened in London were three years ago”, continues Toni, shedding a bit of background on their relationship with law enforcement “Two hundred riot police emptied working premises in Soho, many of which have stayed closed and those people are now working on the street.” The raids in question were those of 3 December 2013, also masked as an operation to swoop premises linked to trafficking, where 22 people thought to be involved in Soho’s thriving sex industry were taken into custody for ‘counselling’.

Stripped of their hard earned cash and dragged out of their homes in the middle of the night, the reality of those raids is the same as what we’re seeing now. The people most affected the most marginalised in society, and though the police preach the safety of victims, it’s the people who are the most vulnerable that live in danger of being ‘saved.’

The small crowd starts chanting, the sound partly muffled by colourful scarves wrapped around faces and bright feathered masks that are used to hide the identities of those involved. A portable megaphone is passed from person to person, each sharing their stories, experiences and anger. 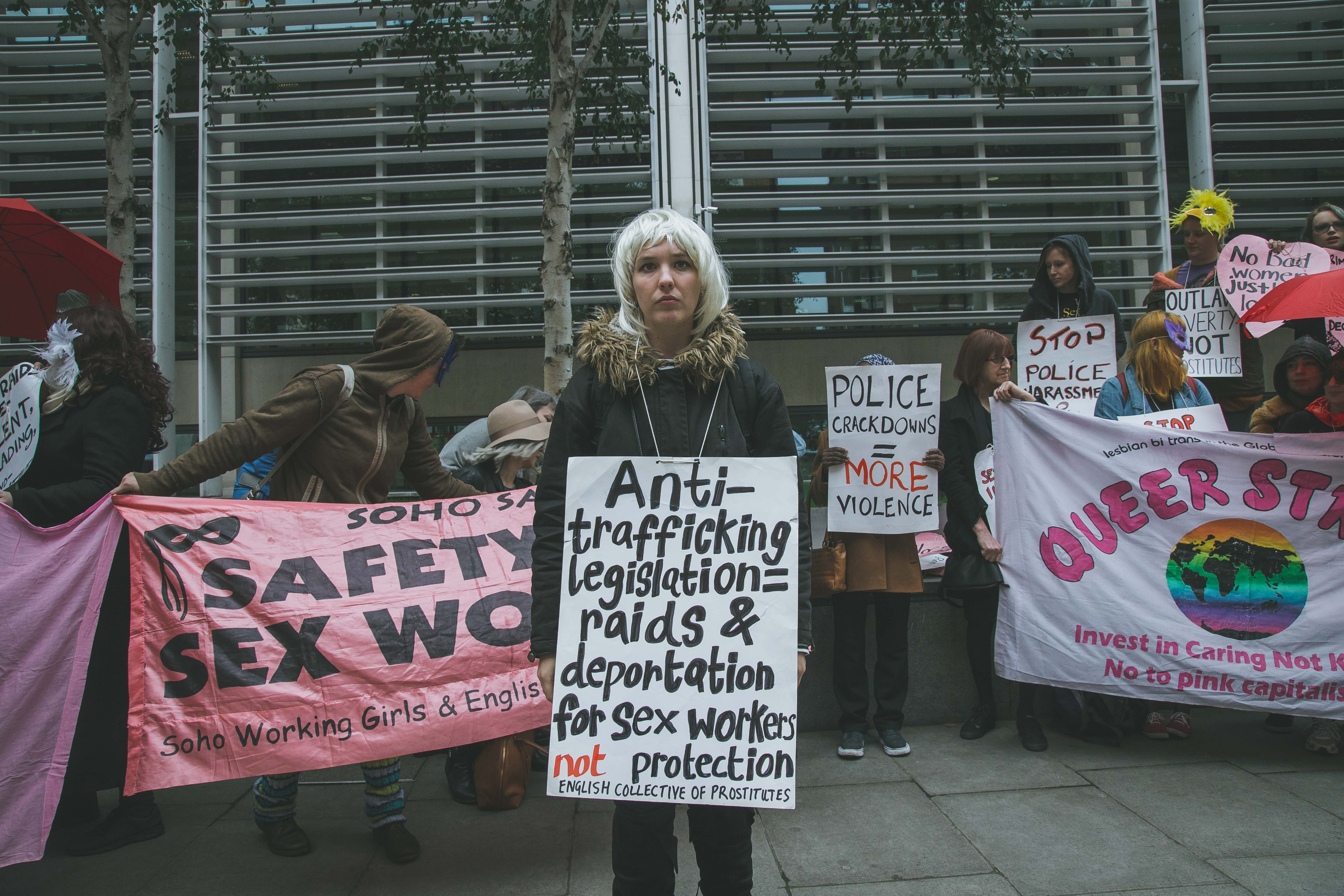 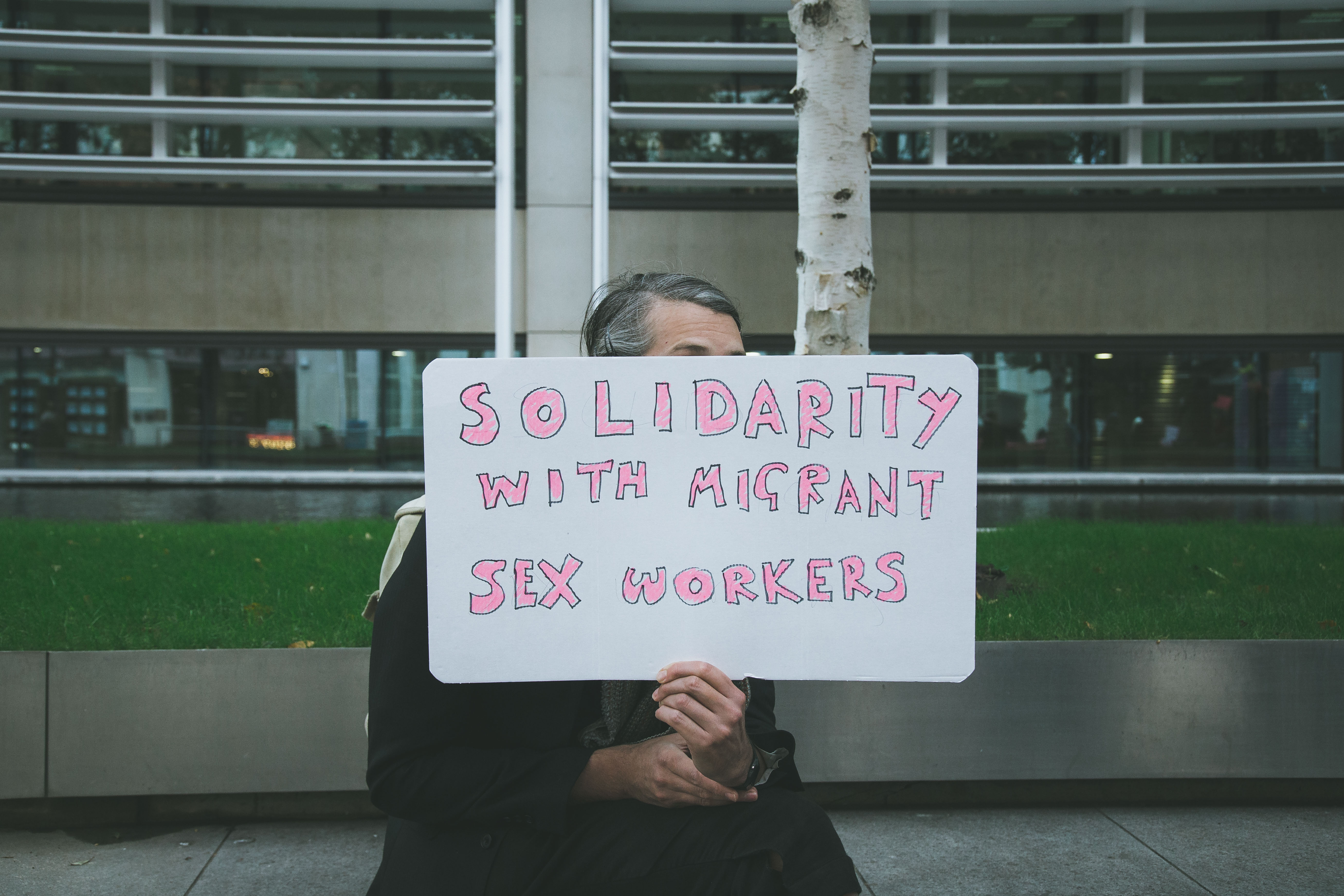 Standing beside me is Laura, a spokesperson for the English Collective of Prostitutes. With her head covered by a bright blonde wig, she’s keen to tell me her opinion. “We want to protest outside the Home Office because of actual police policy. They dragged women away into immigration vans, if that’s how you treat victims of trafficking…” Her voice trails off, she didn’t finish the sentence, but she didn’t need to.

Carrie, another member of the ECP, her face heavily clad in pink feathers, chimes in too. “The government has to be held accountable for this,” she tells me. “They’re who you should be interviewing.” I agree, but as much as I would love to run in the Home Office all guns blazing, I doubt I would get a comment, they’re not even willing to take a flyer as they scurry past.

Instead I got chatting to Paulina, who explained to me that she is a migrant sex worker living in fear of deportation every day, even more so with Brexit and the increased xenophobic attitude in the UK. She laughs shakily as she recalls to me various situations where she’s experienced outright racism on the street and in social situations. “We’re targeted by the police, by raids, by our children taken away from us because we are unfit parents (sic)” and with that she was nervously ushered to the megaphone. 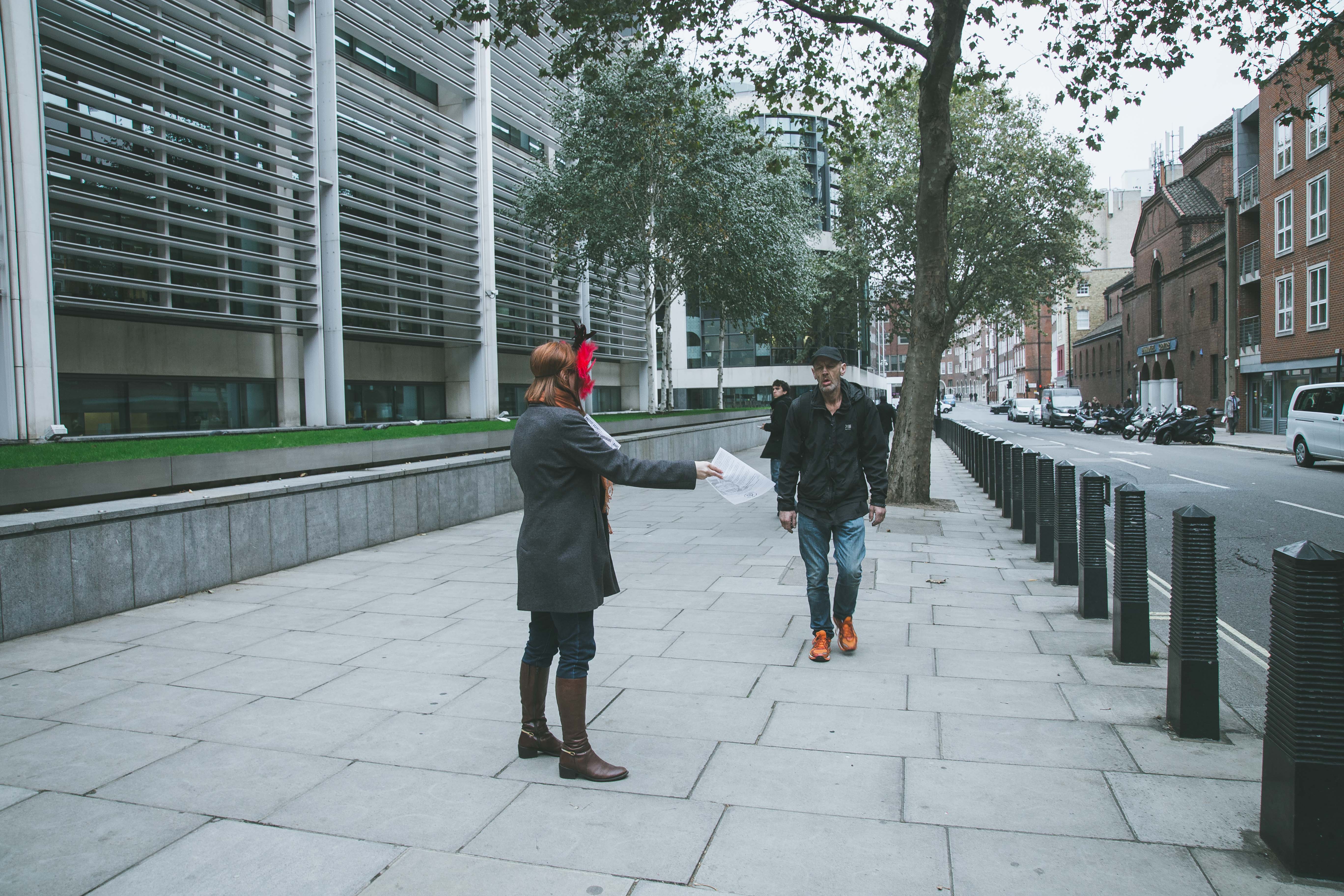 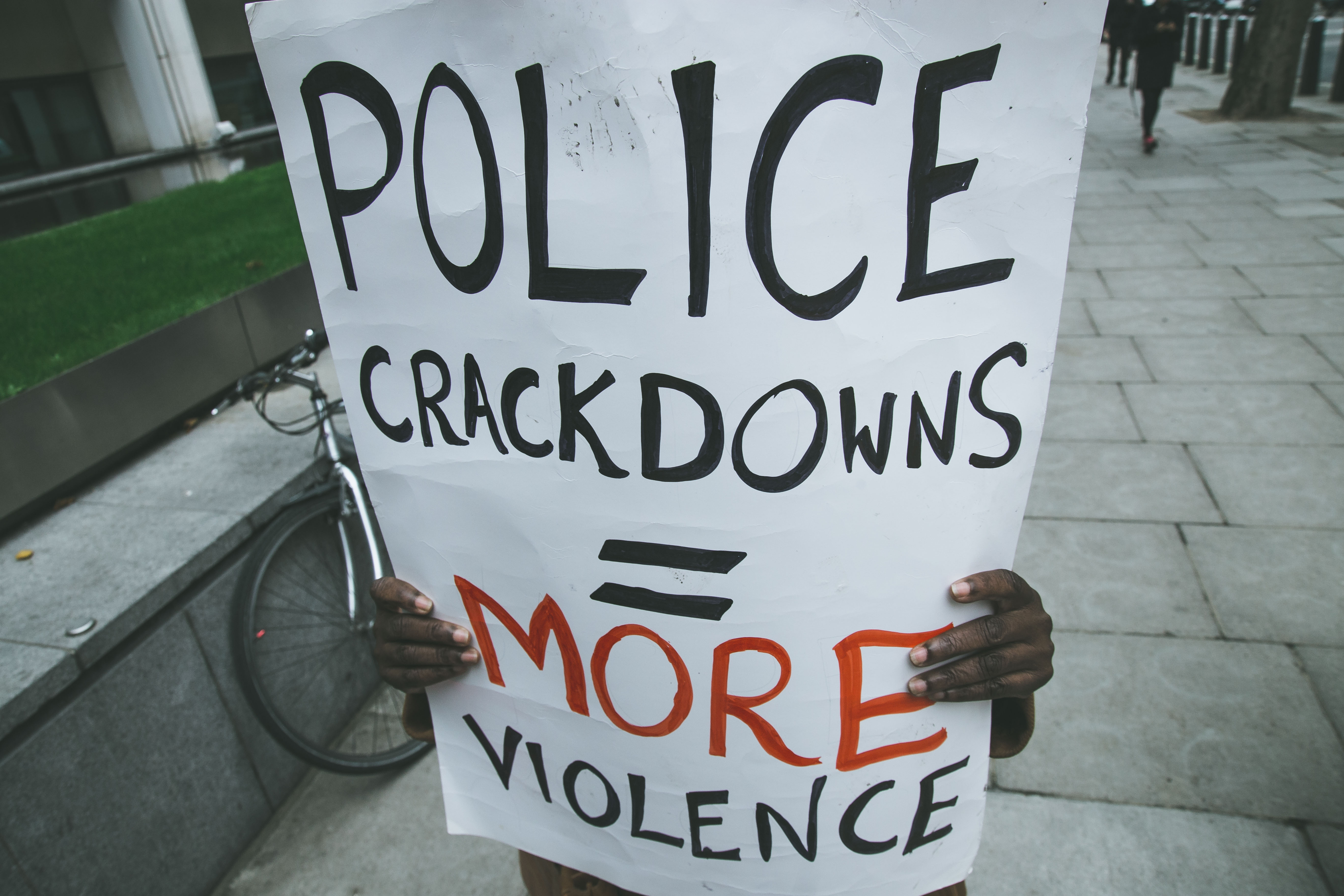 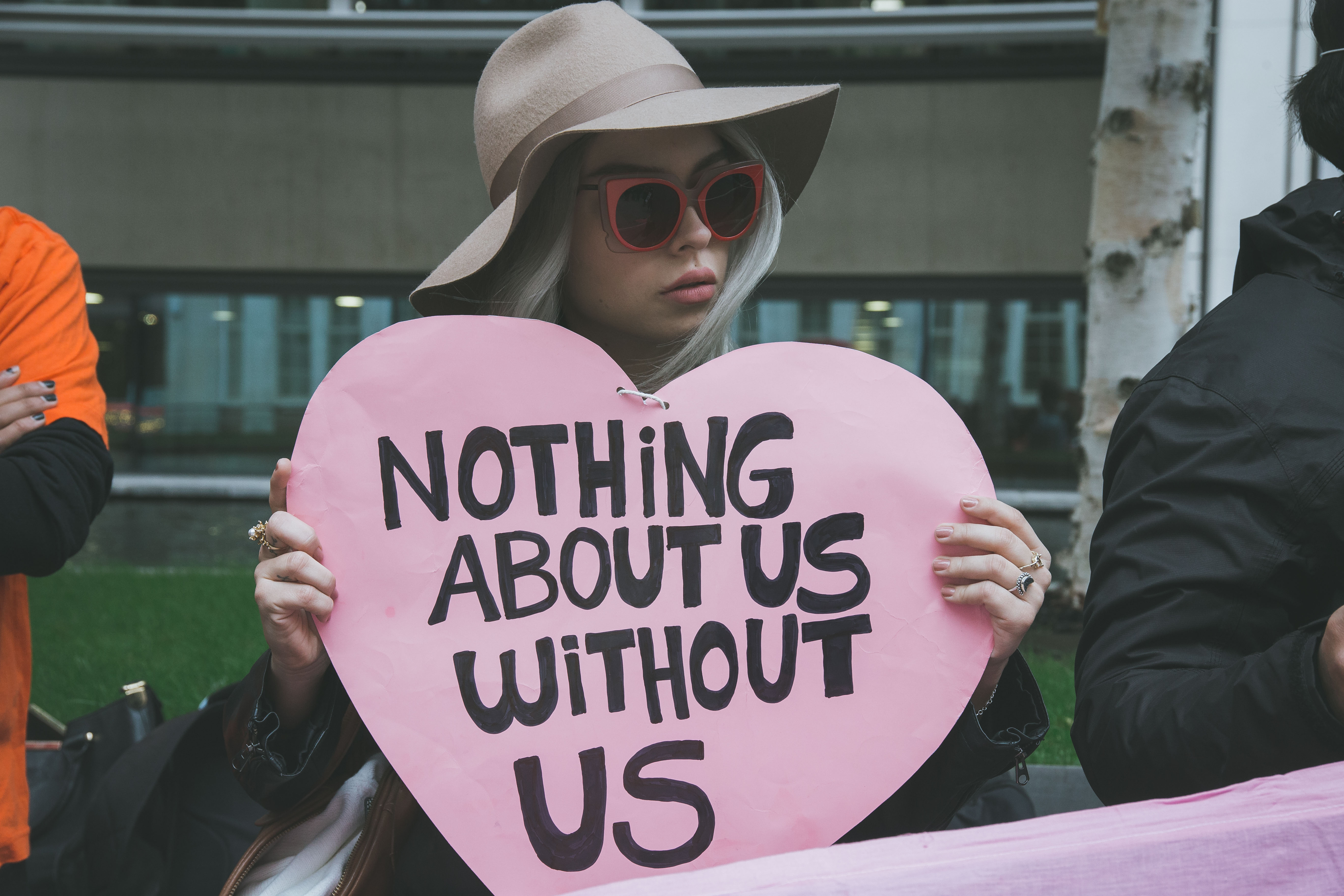 By now the small crowd had grown another fifteen people or so, but as of yet no official government looking people.

Determined to get the opinions of some of the bystanders, I found David, looking dashing with a little pink clip in his hair. He agreed to speak to me, as long as it was the voices of the sex workers themselves that carried the weight. “I’m just here to show solidarity,” he stressed, holding a sign that read ‘solidarity with sex workers’ in pink handwriting to match his fashion accessory. “I think it’s important for people from outside to stand up and for their rights, bolster numbers and amplify protests.”

The raids of Thursday evening came away with £35,000 cash, the arrest of 18 people and the closure of six parlours, and while the closure of brothels might seem like a cause for celebration, the sex workers I speak to reveal that it’s not. Legally brothels are two or more people working together and they’re usually the safest way to run a business without having to take to the streets, which is where those affected by the closures are now going to have to work. The only thing these raids seem to have done successfully is put and more people at risk, especially those who might find themselves sitting in Yarl’s Wood Detention Centre waiting for deportation.

As I walk away from the protest, the loud chants of the protest still ringing in my ears, a new crowd is gathering on the left to protest the rights of child migrants in Calais. It seems that Amber Rudd and her team have a busy week ahead.

Letter from Empower in Thailand to the UK Home Secretary protesting raids done in the name of anti-trafficking. Vice: Are the Soho Brothel Raids Really About Saving Sex Workers?