Letter to Home Secretary: End the use of possession of condoms as evidence 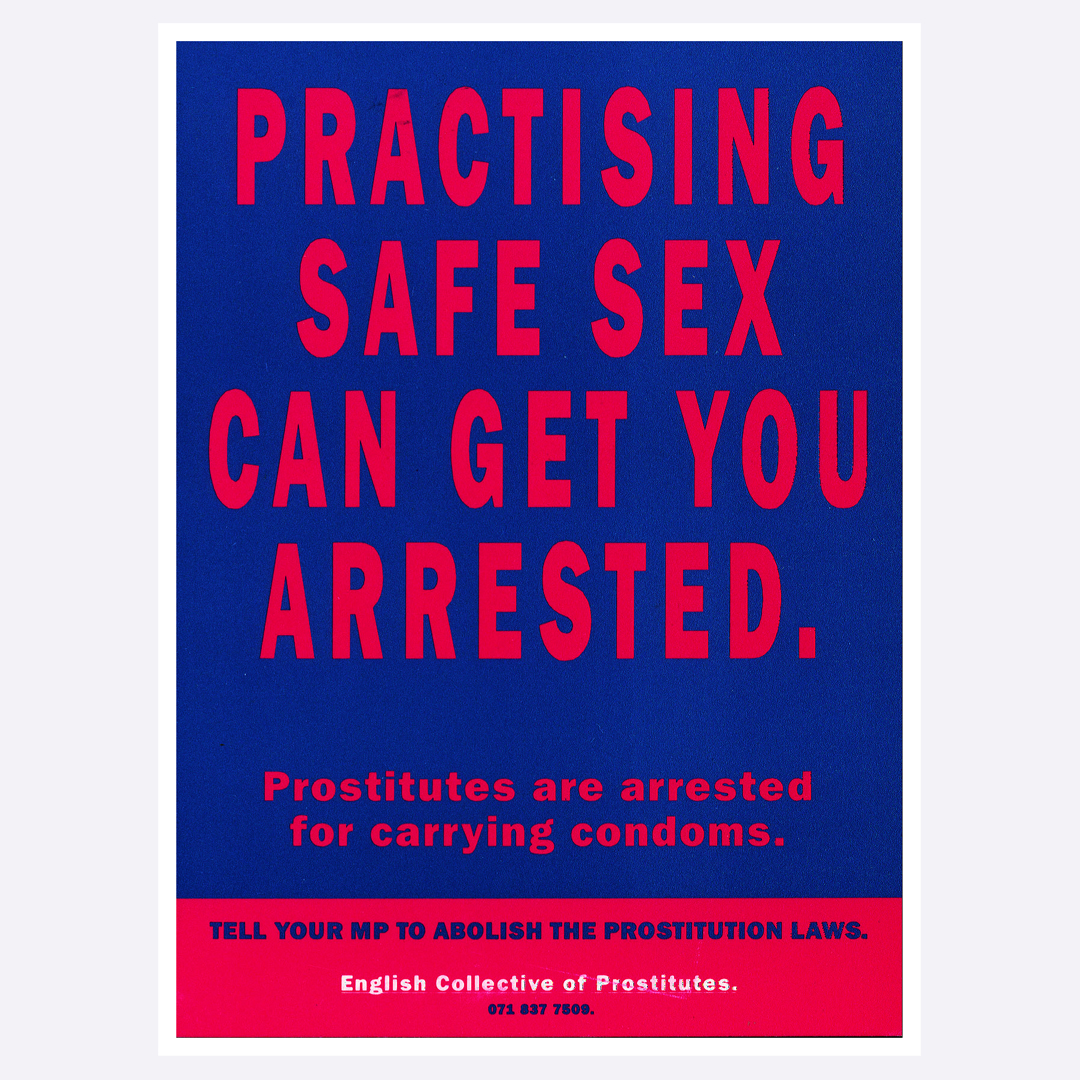 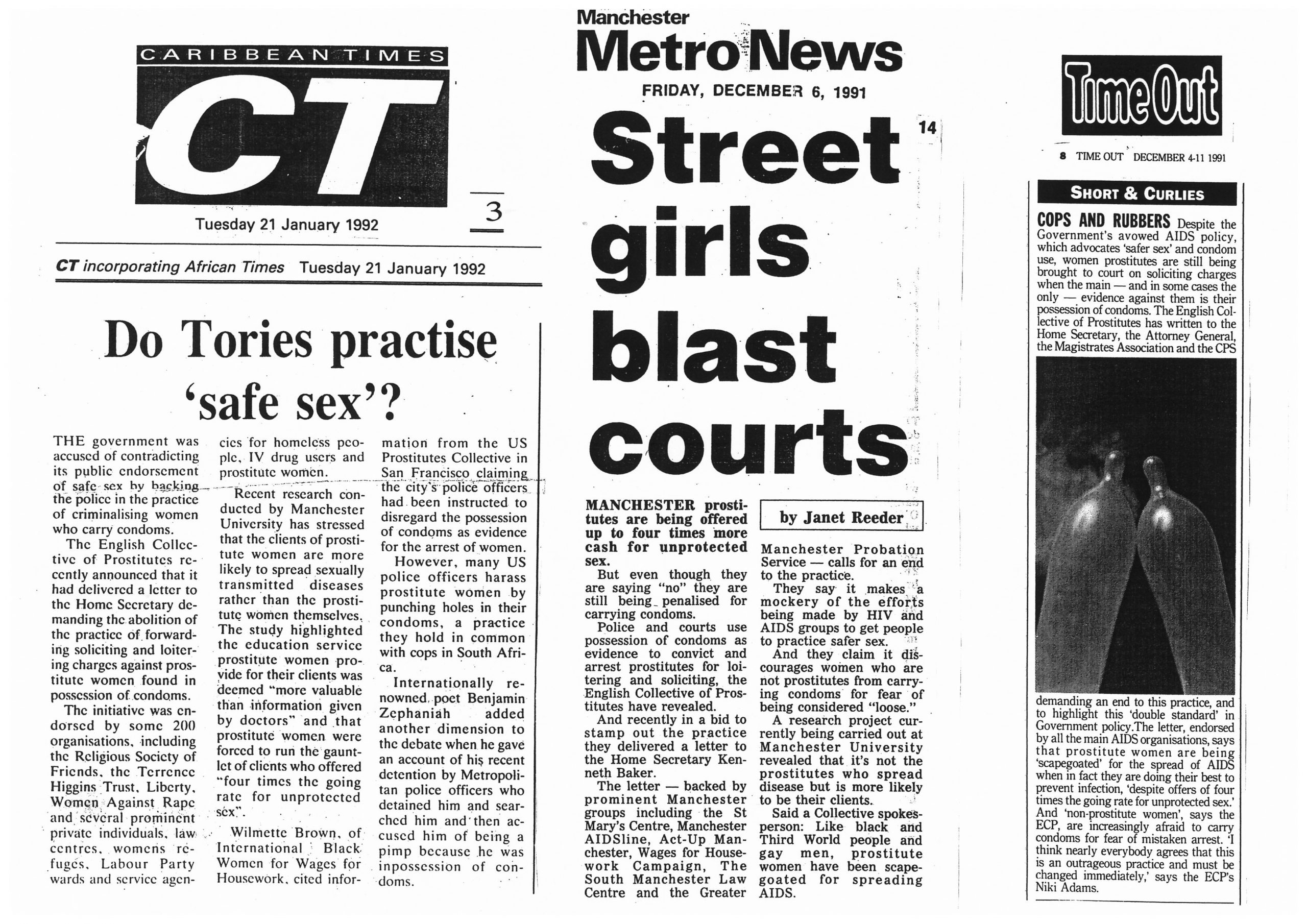 re: prostitute women and condoms

We are writing to ask for an end to the use of possession of condoms as evidence to arrest and convict prostitute women on charges of loitering and soliciting.

As you know, government policy on HIV and AIDS encourages “safer sex”, particularly condom use, yet prostitute women are criminalised for practicing what the government preaches to us.

Throughout the UK the police search women they presume to be prostitutes for condoms. The presence and number of condoms at the time of arrest is recorded on the custody sheet which is later read in court. It can determine whether a woman is arrested, charged and/or found guilty. We enclose a letter from a solicitor in Sheffield about this. In addition, the police use possession of condoms as a way to obtain convictions without having to gather any evidence that the women were loitering or soliciting. This leads to women being arrested while not working because they have condoms on them, and to corrupt police officers planting condoms on women whom they wish, for a variety of reasons, to take into custody.

More and more women are forced on the game by increasing cuts in benefits, homelessness and unemployment. Criminalised by the law for trying to make a living, prostitute women are then also accused of “spreading AIDS” by police, media and politicians. Research has confirmed our experience that these claims are unfounded. Those who make them are more concerned with witch-hunting women than with meeting the health needs of prostitute women, clients and the community at large.

The use of possession of condoms to prosecute prostitute women undermines women’s efforts to protect their health and the health of others, as well as the efforts of health authorities and AIDS organisations working to stop the spread of HIV. Prostitute women already face clients’ widespread reluctance to use condoms — it is common for clients to offer more money in order to have sex without protection. Some health authorities have attempted to help women refuse such offers by distributing free condoms in red-light areas. Yet in spite of the additional risk of prosecution, most prostitute women do carry condoms, preferring to brave arrest rather than illness. But this police and court practice deters some by adding a further obstacle to “safer sex”.

It has been widely reported that most women, particularly young women, have difficulty insisting on boyfriends or casual partners wearing condoms. Women’s less powerful economic and social standing puts them at a disadvantage when deciding on sexual practices. Many women are reluctant to raise the issue of “safer sex” for fear of being considered “loose” or accused of being on the game. The fact that carrying condoms is used as evidence of prostitution reinforces such fears. This concern is not unreasonable: a woman solicitor arrested on her way back from holidays for carrying condoms in her bag was told that “posession of Durex is reasonable grounds [for arrest]”. (Daily Telegraph 22March 1987).

The English Collective of Prostitutes has been raising this double standard in government policy and its serious implications for everyone since December 1986, when we were consulted by Dr Thin, Consultant Adviser to the then DHSS in Genito-urinary Medicine and member of the DHSS Expert Advisory Group on AIDS. We raised it at the Global Impact of AIDS conference organised by WHO and the London School of Hygiene and Tropical Medicine in March 1988; with the All-Party Parliamentary Group on AIDS on 5 December 1989; and in our pamphlet Prostitute Women and AIDS: Resisting the Virus of Repression which has been circulated widely.

If the government is at all serious about “safer sex”, it must ensure that the Attorney General and the Crown Prosecution Service instruct police and magistrates all over the country that possession of condoms should no longer be used as evidence to arrest and convict prostitute women.

Independent: Letter – why prostitute women don’t leave their pimps Statement: Opposing and preventing the scapegoating of sex workers for HIV and AIDS