The English Collective of Prostitutes gives help and advice to sex workers fighting criminal charges, civil orders, and in trying to get justice against violence. The criminalisation of sex work makes it harder for sex workers to work safely by forcing us to work in isolation. Frequently women come to the ECP complaining that the police refused to investigate an attack they reported and instead threatened them with prosecution for prostitution offences.

Here are a few recent examples from sex workers in our network of assaults, stalking and robberies, and the police responses. (Some details have been removed to protect women’s identities.)

A sex worker was nearly strangled in an attack by a client. She went to a police station to report the assault, providing various details that could identify him and handed over the clothes she had been wearing during the attack. The police woman on the reception proceeded to ask multiple times what type of work the woman did instead of taking down information about the assault. Police then refused to photograph her injuries, take her clothing into evidence or gather DNA. The woman was later told by an officer that they ‘don’t really investigate these matters when you have intentionally put yourself at risk’.

A sex worker reported harassment from a client to the police, including a barrage of abusive texts. She gave the police various details that could identify the stalker. She was told that the harassment she was receiving was an ‘occupational hazard’ and that because the client had given the woman a negative review online, this was this the real reason she was complaining about him. The man wasn’t even cautioned and after several weeks the woman was told that the case had been closed. After the case had been closed the police got in touch wanting to question her again and a woman she worked with which looked to her like an attempt to gather evidence to prosecute her.

A sex-worker in the East of England was threatened in early October with arrest and prosecution for managing or assisting in the management of a brothel and receiving underage clients. The police have failed to provide evidence in support of these allegations. Indeed, the worker says that she works legally and independently and has received no complaints from her neighbours or the local community during her tenancy. The ECP asked the legal service Legal Action for Women to complain to the police and the chief inspector for that area wrote back apologising for how the situation was handled, saying that “the officers concerned have now been given feedback and training with regards to the correct policy”.

Two Romanian sex workers received a letter threatening them with a premises closure order. After an initial visit to the property, police claimed to have evidence that the premises were being operated as a brothel and advised the worker that ‘any female [found at the address in the future] is VERY LIKELY to be arrested’. 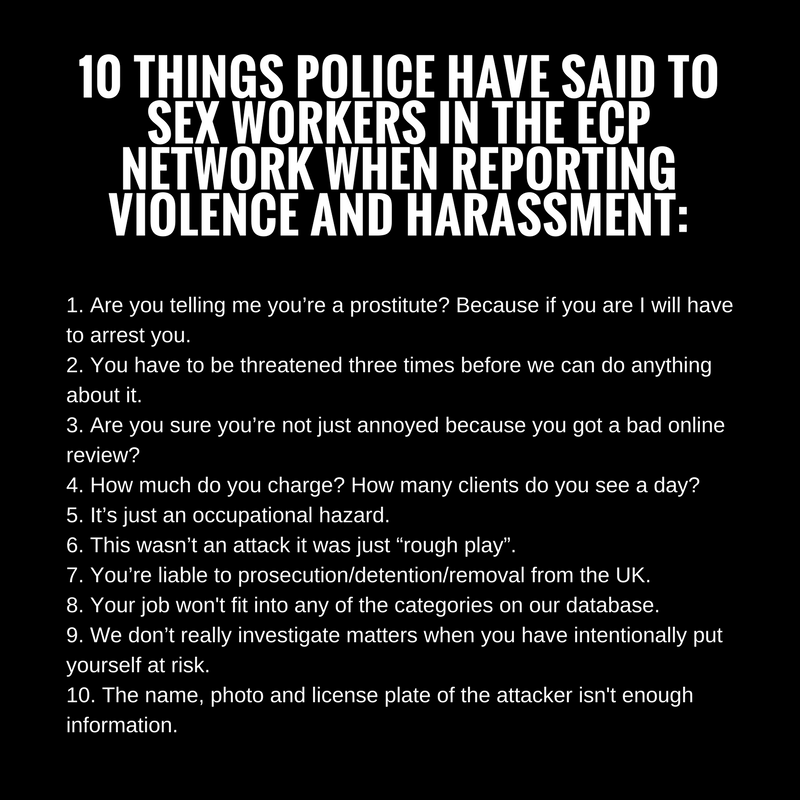