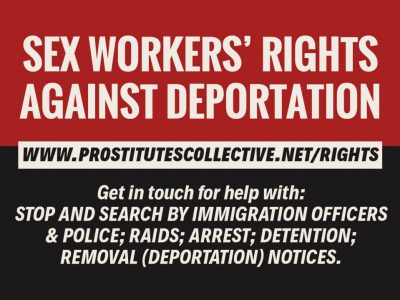 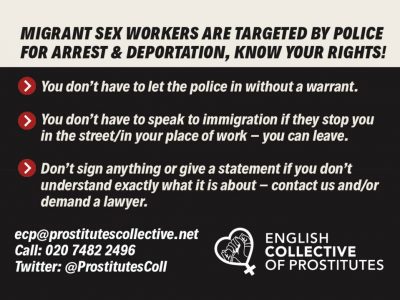 Please feel free to use the images above to circulate on social media / with your networks.

Migrant sex workers are targeted for arrest and deportation by the police. The information here is based on the experience of women in the ECP’s network – both what women have suffered and the ways we have found to defend ourselves.

If you don’t have status, you have the right to apply to stay in the UK under the Refugee Convention or on human rights grounds. For help, see Legal Action for Women’s Self-help Guide.

This is supplementary information to our KNOW YOUR RIGHTS sheet (available at prostitutescollective.net) which has information about sex workers’ rights against stop and search, raids, arrests, charges of soliciting & brothel-keeping, “prostitute cautions”, civil orders, police seizing your money, as well as help if you are threatened or attacked.

STOP AND INTERROGATION BY IMMIGRATION OFFICERS:

You have the right to not answer questions from immigration officials or show them your ID if they stop you on the street or come to your place of work. You can leave/walk away. You have the right to demand they show their ID and explain why they are stopping you. They have no right to stop you based just on how you look.

Anti-trafficking and modern slavery laws are being used to justify raids on sex workers’ premises especially where migrant women are working. Don’t let the police in without a warrant. (Police don’t need a warrant if they hear cries for help or are chasing someone; but if they don’t have one, demand to know why they broke in). Watch them search; don’t let them take photographs or film footage of you – check if they have a body cam. Insist on a receipt for anything they take including money, as cash and other items can disappear during raids. You have the right to record or film police. But police may take your phone so, if possible, send photos/footage to a friend and make a note of key information and the name and number of all the officers. Don’t sign anything you don’t understand.

You have the right to a lawyer and can ask for someone to be told where you are. You don’t have to say anything especially if you don’t understand what you are being accused of.

Some police act illegally or abuse their powers for example, by demanding free sex, stealing money or being racist and/or violent. You don’t have to put up with this and we can help you fight it.

If you are given a removal notice you need to act quickly to fight it. Some EU migrants have been removed illegally or refused entry. Get in touch if you think your right to be in the UK is being denied. If you fear persecution in your home country you can claim asylum and/or there may be other reasons you can fight to stay in the UK. See Legal Action for Women’s Self-help Guide.

Police have been arresting migrant sex workers over and again, labelling them “persistent offenders”, claiming that their presence in the UK is “not conducive to the public good” and using this to deport them or to deny them British citizenship. This makes it especially important to fight every charge and not to plead guilty to anything you didn’t do. If you are threatened with removal on the grounds of your criminal record you have the right to appeal. You can make the case that you are not a threat to “public order” and that removal would violate your human rights, in particular your right to a private and family life. If you are excluded, that is, prevented from entering the UK you still have the right to appeal but have to do it from your home country.

If your conviction resulted in a prison sentence of over 12 months, the Home Office has greater powers to remove you. You have the right to appeal on human rights grounds, in particular based on your right to a private and family life.

The deadline for EU citizens to apply for “UK immigration status” has passed but you can make a late application if you have a good reason like medical grounds or are vulnerable, isolated and don’t have digital skills. If you haven’t got status as a EU citizen and immigration stops you, they are supposed to give you 28 days to apply.

Most people think of trafficking as bringing someone here by force and coercing them to work. In fact, anyone who helps a sex worker travel who is then “exploited” can be prosecuted for trafficking as prostitution is treated differently from other work — as fundamentally exploitative. Sex workers have fought these charges and helped others escape from violence, but the laws make this hard.

The ECP is a network of sex workers, mostly women, working both on the streets and indoors. We campaign for decriminalisation and safety, and work with sex workers who are defending themselves against criminal charges. We also fight for resources so that any of us can leave prostitution if and when we want.